A bear in southern Arizona caused quite a stir this week, along with a brief power outage, after it climbed up a utility pole and became stuck.

Utility company Sulphur Springs Valley Electric Cooperative (SSVEC) was notified Monday morning that the bear was trapped in power lines on the outskirts of Willcox, about 80 miles east of Tucson.

Werner Neubauer, a company lineman, said he and his apprentice lineman rushed to disable the power so the animal wouldn’t get electrocuted, FOX 10 of Phoenix reported. 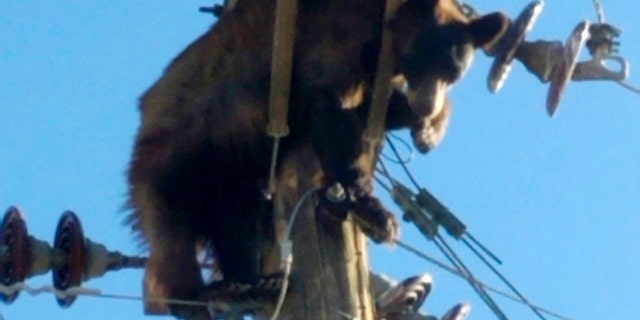 “He [the bear] was in a pretty dangerous spot. Could’ve very easily gotten himself electrocuted. He was real close to a phase energized at 7,500 volts,” Neubauer said.

Soon after, the lineman said he went up in a bucket lift to try to help get the animal down. At one point, he even tried talking to it.

“Alright, little bear. Time to get off this pole,” Neubauer was heard saying in a video posted on Twitter by the Arizona Game and Fish Department.

“I think I told him I was gonna help him get down the pole,” he later told The Associated Press. “I know he couldn’t understand me. But it did get his attention.”

Thanks to his efforts, the bear eventually climbed down and ran off into the desert. The animal was uninjured.

According to the utility company, the massive animal mistook the utility pole for a tree. Power was promptly restored, the company added.

It was the second time in a month that a bear was spotted climbing a utility pole in a southern Arizona city, according to the Arizona Game and Fish Department.