Home » Science » Bladeless wind turbine could save more than 500,000 birds each year

Bladeless wind turbine that vibrates to generate power could save more than 500,000 birds killed each year by spinning blades, experts say

A Spanish company is developing a wind turbine that doesn’t require blades to generate energy.

Unlike typical wind turbines, which use the breeze to spin blades that in turn power a generator, the Vortex Bladeless turbine uses the movement caused by air hitting its 10-foot pylon to generate power.

In addition to being quieter and much smaller, the Vortex could save the lives of the up to 500,000 birds killed by traditional turbines.

Right now the device can only generate a small amount of energy, but developers hope to scale up and provide energy for dozens of homes with a single device. 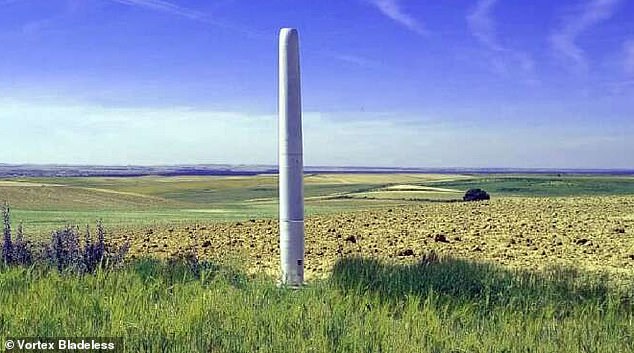 The Vortex Bladeless turbine (pictured) is quieter and takes up much less space than a traditional wind turbine, and poses little threat to birds

Wind turbines are an increasingly popular option for environmentally friendly energy, with a smaller carbon footprint than coal or natural gas.

But with colossal blades that spin at speeds of more than 200mph, they pose a serious danger to wildlife, killing hundreds of thousands of birds and bats every year.

In the United States alone, the blades are responsible for between 140,000 and 500,000 deaths alone, according to the US Fish and Wildlife Service.

Even out at sea, birds of prey are attracted to the massive structures.

It’s believed they dislike crossing large expanses of open water and feel safe having a place to land during windy conditions.

Two rings of repelling magnets are positioned at the base of the 10-foot pylon. When the breeze pushes the mast one way, one of the magnets pulls it in the other direction. Those movements generate energy that can be harnessed for electricity

And because of their size and the noise they make, wind farms must be placed far from urban areas.

But Madrid-based company has developed a bladeless turbine that can generate electricity without sacrificing space or wildlife.

Two rings of repelling magnets are positioned at the base of a 10-foot pylon.

When the breeze pushes the pylon one way, one of the magnets pulls it in the other direction — providing a boost, even when wind speeds are low.

The device buffets back and forth like an wacky waving inflatable tube ‘guy’ outside a car dealership.

Those movements are transformed into electricity using an alternator that increases their frequency.

‘In other words, it is a wind turbine which is not actually a turbine,’ the company says.

The core of the pylon is made of poltruded carbon fiber, which the company says can withstand 25 years of use before breaking or wearing out.

Without blades, the Vortex is also quieter, smaller and cheaper than conventional turbines, and can adapt more quickly to changes in wind direction.

And without a motor, it won’t freeze up during a harsh winter snowstorm like the one that cause wind turbines to stop working in Texas last month. 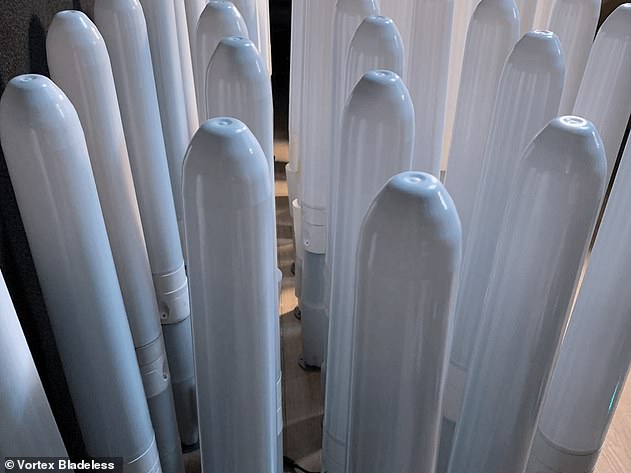 The core of the pylon is made of poltruded carbon fiber, which the company says can withstand 25 years of use before breaking or wearing out.  ‘It does not need lubrication and has no parts that can be worn down by friction’ 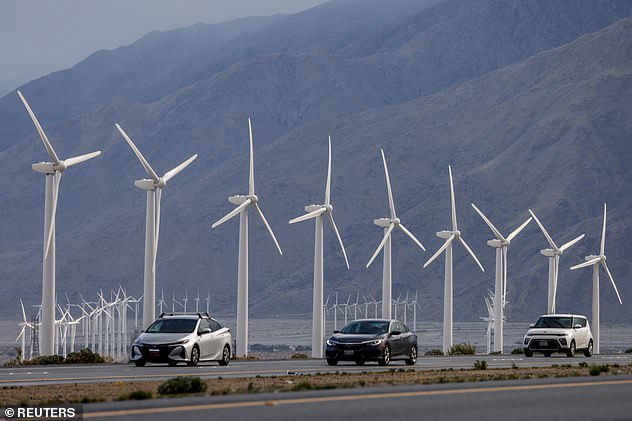 As countries have looked to reduce their carbon footprint, wind farms have become increasingly popular. But the massive blades, which can spin up to 200mph, kill hundreds of thousands of birds and bats every year

‘Our technology has different characteristics which can help to fill the gaps where traditional wind farms might not be appropriate,’ he told The Guardian.

Vortex claims its device can generate electricity about 30 cheaper than conventional wind turbines, ZME Science reported, mainly because of the lower installation costs and the minimal maintenance. 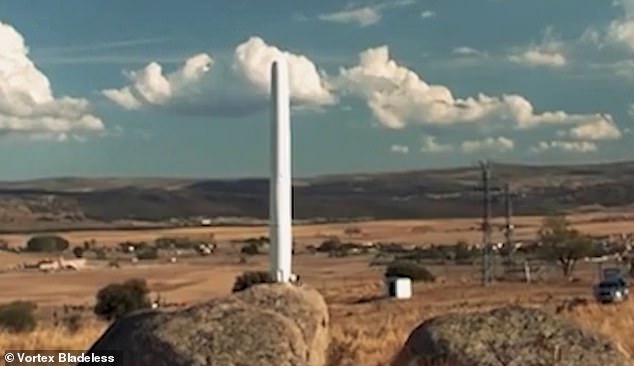 Unlike a traditional wind turbine, the Vortex ‘has no gears, brakes, bearings, or shafts,’ its inventor says. ‘It does not need lubrication and has no parts that can be worn down by friction’

‘Our machine has no gears, brakes, bearings, or shafts,’ Yáñez said in a statement.

‘It does not need lubrication and has no parts that can be worn down by friction.’ he said.

‘Thanks to being very lightweight and having the center of gravity closer to the ground, anchoring or foundation requirements have been reduced significantly compared to regular turbines, easing installation.

Though they have plans to scale up, the prototype Vortex Bladeless can only generate about 100 kilowatts.

For comparison, New York City uses an average of 11 million kilowatts a day.

Yáñez sees a Vortex Bladeless turbine being attached to an individual home, like solar panels on a roof.

‘They complement each other well, because solar panels produce electricity during the day while wind speeds tend to be higher at night,’ Yáñez told the Guardian.

‘But the main benefit of the technology is in reducing its environmental impact, its visual impact and the cost of operating and maintaining the turbine,’ he added.

Earlier this year, Vortex Bladeless was named one of the 10 most exciting energy startups by Norway’s state energy company, Equinor, which is giving the company support resources and mentor opportunities.

‘We believe working together with startups that push barriers within technology and innovation is fundamental to shape the future of energy,’ Equinor spokesperson Gareth Burns said.

With an industrial partner, perhaps Equinor, Yáñez envosions a 460-foot-tall Vortex that could generate a full megawatt of energy.

But he isn’t the only one investing in bladeless wind energy: Tunisian engineer Anis Aouni is working on Saphonian, a parabolic dish that rotates to catch the wind like a ship’s sail.

‘It’s like a big ‘eight’ in space,’ Aouni told Voice of America in 2017. ‘It’s a movement that we can find in nature. … We find the same movement in fish tails when they are moving, or in birds’ wings.’

Are wind turbines making you sick?

Sickness caused by wind turbines is not a real thing, according to the nonprofit Energy and Policy Institute.

Instead, symptoms such as nausea, dizziness and migraines are simply imagined by those living nearby, scientists say.

A report published by the organization in 2016, claimed ill health blamed on turbines is merely the result of the ‘nocebo’ effect, a term for people’s belief in a negative health reaction despite there being no scientific evidence to support it.

The institute pointed to lawsuits against wind farm operators regularly being dismissed.

In 49 cases brought in the US, Canada, New Zealand, Australia and the UK, 48 were dismissed as having no merit.

And the only winning case, in Falmouth, Massachusetts, related to noise caused early in a turbine’s operation that apparently caused problems for nearby residents.

‘These claims about wind turbines causing health impacts are not being upheld, which means there isn’t sufficient evidence to prove that wind turbines cause any problems with human health,’ said Gabe Elsner, the nonprofit’s executive director, according to Climate Central.