Jeff Bezos and Elon Musk, two of the richest men in the world, both with dreams of leading humanity out into the solar system, are fighting over the moon.

On Monday, Blue Origin, the rocket company founded by Mr. Bezos, who will step down as Amazon’s chief executive later this year, filed a 50-page protest with the federal Government Accountability Office, challenging a $2.9 billion contract to SpaceX from NASA to build a lander for American astronauts to return to the moon.

NASA announced this month that Mr. Musk’s SpaceX was the sole winner in the competition, beating Blue Origin and a third company, Dynetics of Huntsville, Ala., a defense contractor.

The dispute highlights that whatever their outsize ambitions for the future, the present fortunes of Mr. Musk’s and Mr. Bezos’ space companies and the ability to generate the profits needed to pay for their grandiose dreams depend on mundane business concerns like jousting for government contracts.

Bob Smith, chief executive of Blue Origin, said NASA’s decision was based on flawed evaluations of the bids — misjudging advantages of Blue Origin’s proposal and downplaying technical challenges in SpaceX’s. He also said NASA had placed a bigger emphasis on bottom-line cost than it said it would.

“It’s really atypical for NASA to make these kinds of errors,” Mr. Smith said in an interview. “They’re generally quite good at acquisition, especially its flagship missions like returning America to the surface of the moon. We felt that these errors needed to be addressed and remedied.”

He added that in any case, the space agency should have stuck with a desire it had stated many times, of wanting to hand out awards to two companies.

A year ago, NASA selected three lunar lander designs, by SpaceX, Blue Origin and Dynetics, for further study. NASA would then decide which designs it would finance to be built for lunar landings.

The Blue Origin proposal was a collaboration known as the National Team with three more traditional and experienced aerospace companies — Lockheed Martin, Northrop Grumman and Draper. The lander they proposed looked somewhat like a bigger version of the one used for NASA’s Apollo moon landings of the 1960s and 1970s. 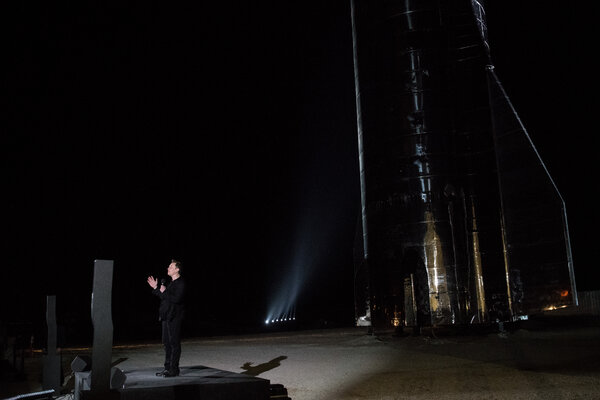 SpaceX, by contrast, proposed adapting a giant rocket called Starship that it is developing for trips to Mars. SpaceX has been testing Starship prototypes at its site in South Texas, often with explosive results.

During previous trips to the moon, NASA was in charge of designs and operations, an approach that triumphantly beat the Soviet Union to the moon. But it was expensive, and when interest in the moon waned, the technology had little value to the private sector.

In recent years, NASA has turned to private companies to design and operate spacecraft as a way to reduce the costs of space travel and spur commercial enterprise off Earth. That has proved successful for missions to send cargo, and now astronauts, to the International Space Station.

SpaceX, in particular, has thrived in this new entrepreneurial approach to spaceflight. Its Falcon 9 rocket, used for the space station missions, is now a workhorse for launching commercial satellites. And its Crew Dragon capsule, which carried a third load of astronauts for NASA to the space station on Friday, will also be used for rides paid for by wealthy space tourists.

Blue Origin lags behind SpaceX’s accomplishments. Its small, successfully tested New Shepard spacecraft is meant only for short, suborbital jaunts. A larger New Glenn rocket currently under development will compete with SpaceX and other rocket companies for sending satellites to orbit, but it will not make its maiden flight until at least 2022, two years later than originally announced.

Blue Origin’s partners have decades of space experience, however.

NASA announced the lunar lander competition in 2018, and officials had repeatedly said they wanted to choose more than one company to ensure competition to spur innovation and redundancy. Last September, Jim Bridenstine, then the NASA administrator, testified that he would worry if NASA chose only one lander design.

“When you eliminate the competition,” he told a Senate subcommittee, “you end up with programs that inevitably get dragged out, and you end up with cost overruns and schedule delays.”

However, for the current fiscal year, Congress provided only $850 million — a quarter of what Mr. Bridenstine and NASA were requesting for the development of lunar landers.

When NASA officials announced SpaceX as the single winner, they suggested that limited budgets influenced the decision. Kathy Lueders, NASA’s associate administrator for human exploration and operations, said selecting one company to build the first moon lander was the “best strategy” at the current time.

In its rules for the competition, NASA did not promise it would choose two companies or even any at all. Instead, according to the document, the agency said it was planning to select up to two companies.

Ms. Lueders said a follow-up competition to build subsequent landers would be open to Blue Origin, Dynetics and other companies.

Mr. Smith said Blue Origin would put in bids on a future competition. But he added, “The idea that we’re going to be able to restore competition with something that right now is completely undefined and completely unfunded doesn’t make a lot of sense to us.”

When Bill Nelson, a former senator from Florida whom President Biden has nominated to be the next administrator for NASA, testified at a confirmation hearing last week, Senator Maria Cantwell, Democrat of Washington and chairwoman of the Senate Committee on Commerce, Science and Transportation, asked him to commit to providing Congress with a plan for how NASA would ensure commercial competition in the moon lander program.

“I do,” Mr. Nelson said. “Competition is always good.”

Mr. Smith said that with similar programs in the past, like the space station missions, NASA had hired more than one company even though it lacked certainty on future budgets.

The Blue Origin-led bid, at $6.0 billion, was more than double the price of SpaceX’s. But Mr. Smith said NASA had gone back to SpaceX and negotiated the price of its proposal, even though it did not have similar discussions with the other two teams.

“We didn’t get a chance to revise and that’s fundamentally unfair,” Mr. Smith said.

Less than $9 billion would have paid for two landers, and that is comparable to the $8.3 billion cost of the commercial crew program that now provides transportation to the space station, the protest argued.

“NASA is getting some great, great value from these proposals,” Mr. Smith said.

NASA’s evaluations of the bids gave ratings of “acceptable” on the technical aspects of Blue Origin’s and SpaceX’s proposals. Dynetics’s rating was lower, at “marginal.” SpaceX’s management was regarded as “outstanding,” while Blue Origin and its partners were judged, “very good,” as was Dynetics.

Mr. Smith said NASA misjudged aspects of its proposal, like the communications system and redundancy in guidance and navigation, as weaknesses. He also said it downplayed the risks in SpaceX’s design like the need to refuel Starship in orbit, which has never been tried before.

The NASA evaluators “largely dismissed the difficulty in the number of launches and rendezvous required in SpaceX’s proposed solution,” Mr. Smith said. “The risk of SpaceX development is high.”

The Government Accountability Office has 100 days to make a decision on the protest.

This is not the first time that Blue Origin and SpaceX have battled over a NASA contract. In 2013, NASA chose SpaceX to take over Pad 39A at the Kennedy Space Center in Florida, which had been used for Saturn 5 launches during Apollo and then launches of the space shuttles.

Blue Origin argued that its proposal, which would allow the launchpad to be used by multiple companies, should have been favored. But the G.A.O. said NASA had not expressed a preference for multiple companies using 39A and denied the protest. SpaceX now uses the launchpad for missions to the space station, and that is where the Starship trips to the moon would likely start from.