Not just for throwing! Boomerangs were used for fighting, hunting, digging, fire management and in ceremonies 380 years ago, analysis of collection in South Australia reveals

Boomerangs were famously used by indigenous Australians for hunting animals like kangaroos and emus.

Now, researchers in South Australia show one particular collection was also used for fighting, digging, fire management and even in ceremonies.

The scientists used radiocarbon dating to learn more about the rare collection of sticks, comprised of four complete boomerangs and one wooden fragment.

They were recovered from Cooper Creek, near the town of Innamincka in South Australia’s far north-east. 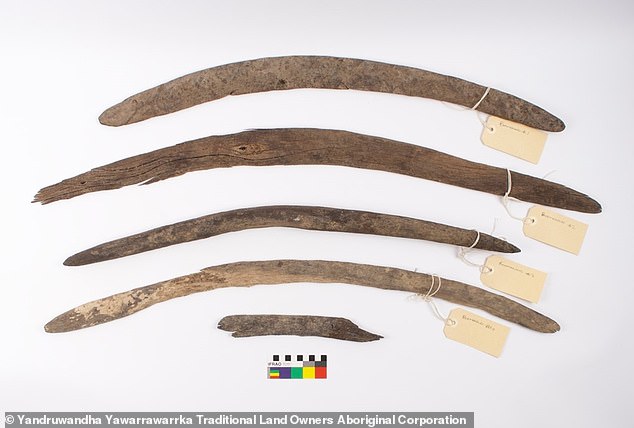 HOW DO BOOMERAGS RETURN TO THEIR OWNER?

Boomerangs have two ‘wings’ that are spun powerfully around a centre of gravity.

When a boomerang is thrown, the top wing is moving faster through the air as compared to the bottom wing.

The difference in the lift between the top and the bottom wing creates a torque that makes the boomerang tilt and gradually return to the thrower.

The study, led by Flinders University in South Australia and published in Australian Archaeology, showed the items had ‘a diverse past’.

The oldest Australian boomerangs used by native peoples are over 10,000 years old, although these ones are around 380 years old at the very most.

‘This range of activities goes well beyond the stereotype of the returning boomerang known to most Australians,’ said study author Dr Daryl Wesley at Flinders University.

Boomerangs have two ‘wings’ that are spun powerfully around a centre of gravity.

They’re famous for their ability to return to the thrower, thanks to a quirk of aerodynamics.

Queensland Museum explains: ‘A common misconception is that all boomerangs are returning types.

‘In fact most of the Aboriginal hunting and war boomerangs are designed to travel only in the direction thrown.’

The four boomerangs and one wooden fragment were discovered in the creek bed during drought conditions in 2017 and 2018 by Jason Litherland from National Parks and Wildlife South Australia and Katheryn Litherland, a traditional owner.

Results of radiocarbon dating also revealed that the boomerangs range in age from approximately 1650 to 1830 AD.

The year 1830 is just before European incursions into the region by explorers such as Charles Sturt in the 1820s, as well as Robert O’Hara Burke and William John Wills, who led an ill-fated expedition in 1860.

Burke, an Irishman, and Wills, and Englishman, successfully crossed Australia from south to north, starting in Melbourne.

Along with two other men, they became the first Europeans to cross Australia south to north when they reached the Gulf of Carpentaria in February 1861. 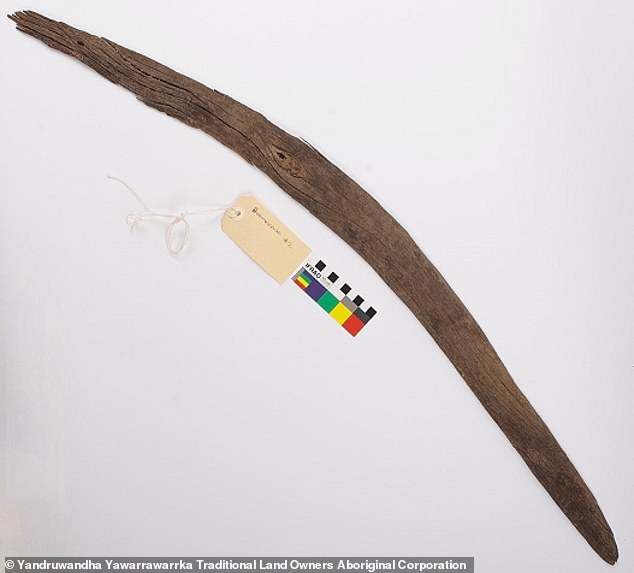 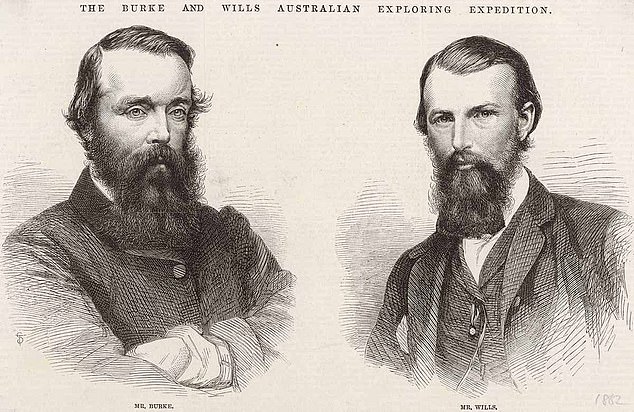 But on their return journey, Burke and Wills died within a few days of each other at the end of June 1861.

These boomerangs could have been thrown in Cooper Creek mere decades prior to the arrival of Burke, who established a depot camp at the creek during the expedition.

The creek, which runs through the states of both South Australia and Queensland, is one of the most famous rivers in Australia due to its connection with the explorers.

ORIGINS OF THE BOOMERANG

The boomerang has a long history in Australia. Images of boomerangs can be seen in rock art and their use probably dates back tens-of-thousands of years.

One preserved boomerang found at Wyrie Swamp in South Australia was dated at about 10,000 years old.

Despite being used as a symbol of Aboriginality and Australiana, the boomerang was limited in its distribution among Aboriginal people.

While most Aboriginal groups were aware of the tool, the people of many areas did not use it – particularly in rainforest areas where the dense foliage does not allow for the flight of a returning boomerang.

Boomerangs are not traditionally found in the far north-west Kimberleys, the west of South Australia, north-eastern Arnhem Land, Tasmania, or other offshore islands. They are found throughout Queensland with the exception of Cape York (although rock art in this area suggests they were once used there).

The term bou-mar-rang was first documented in 1822 and has been adopted from the Dharuk language of the Turuwal people from George’s River near Port Jackson, New South Wales.

A common misconception is that all boomerangs are returning types. In fact most of the Aboriginal hunting and war boomerangs are designed to travel only in the direction thrown.

The non-returning variety can be used as a hand club, a throwing stick, or can be ricocheted off the ground to strike its quarry.

They are used in warfare and to bring down medium size prey like wallabies or goannas.