A drop in maritime traffic may be behind a surge in the number of sharks seen in British waters, according to an expert.

There have been multiple sightings of both basking and porbeagle sharks in recent weeks with members of the public spotting them closer to the shore than usual.

Some have ended up in marinas while others have been photographed and filmed in the sea just off the coast.

David Sims, Professor of Marine Ecology, Ocean and Earth Science at the University of Southampton, believes the spike could be due to a drop in maritime voyages. 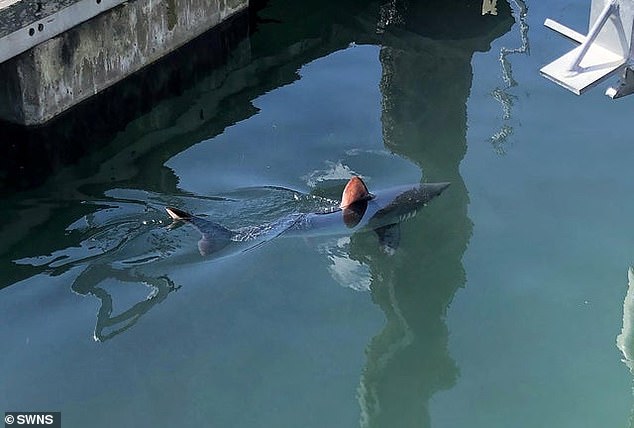 David Sims, Professor of Marine Ecology, Ocean and Earth Science at the University of Southampton, believes the spike in sightings is due to a drop in maritime voyages. Pictured, a porbeagle shark spotted in two Plymouth marinas last week

Species of turtle, shark, penguin, seal and whale swim in circles, new research shows – but scientists aren’t sure why.

Biologging uses using small instruments mounted on an animal to track their movements over long periods of time.

This finding is surprising in part because swimming in a straight line is the most efficient way to move about.

At first glance the behaviour may appear random, but it could serve several similar purposes, including foraging, social interactions, and navigation.

Footage of the animal was captured at Queen Anne’s Battery marina and Sutton Harbour last week.

‘The shark seen in Queen Anne’s Battery looked like a young porbeagle, perhaps a year or two old (adults grow to over 3 m in length),’ he said.

‘However, porbeagles large or small are rarely seen in marinas. They do hunt fish in shallow waters so it is possible that it moved far into Plymouth Sound following fish schools.

‘One reason that it may have come so close is the reduced marine traffic associated with the COVID-19 lockdown restrictions.

‘During the main lockdown period in March – July 2020 in Europe, large pelagic sharks such as blue sharks were seen venturing into very shallow water and in harbours and marinas.

‘This has been put down to “quieter” seas, as fewer passenger, fishing and tourism vessels were operating at that time.’

Marine explorer Rupert Kirkwood was one of the people who benefited from the increase in shark numbers.

He spotted five basking sharks during a single trip out on his kayak off the coast of Cornwall over the weekend.

‘Sharks are sensitive to sound, including ship sounds which are sometimes avoided, so it is possible that if there has been a quieter ‘Sound’, this may have acted to help extend the explorations of this young shark into a Plymouth marina,” Professor Sims adds.

He says he has been satellite tracking the sharks in north Cornwall.

‘This showed that throughout July and August the sharks occupied localised areas within the Celtic Sea, between the south-west UK, south-west Wales and southern Ireland,’ he said.

‘At times a porbeagle was only a few kilometres off of the Cornish coast. Only one shark was tracked into the autumn, when it moved into deep water off the continental shelf, then north towards colder latitudes.

‘This was likely part of seasonal movements to other foraging locations.’

A 16ft basking shark was spotted last week swimming alongside a boat off the British coast.

Footage shows the giant sea creature, which is the second-largest shark in the world after the whale shark, swimming below the surface in Portloe Bay, Truro, Cornwall.

The creature approaches the surface of the boat before sinking into the waters and disappearing from view.

A local wildlife cruise crew had been testing out their boat on April 4, prior to re-opening for passengers today, when they spotted the shark swimming just beside their vessel.