‘British diet’ staples like white bread, butter and chocolate can impair function of immune cells in the gut and increase your risk of inflammatory bowel disease, study warns

A Western diet rich in sugar and fat causes damage to Paneth cells – immune cells in the gut that help keep inflammation in check, a study shows.

When Paneth cells aren’t functioning properly, the gut immune system is prone to inflammation, putting people at risk of inflammatory bowel disease, say the authors, who performed studies of both humans and lab mice.

American and British diets in particular are high in sources of fat and sugar, from foods including butter, pastries, chocolate, confectionery, pizza, burgers and white bread.

Eating a Western diet impairs the immune system in the gut in ways that could increase risk of infection and inflammatory bowel disease, according to a study from researchers at Washington University School of Medicine in St. Louis and Cleveland Clinic

It’s seen as the antithesis of the Mediterranean diet, which has been promoted by health experts.

The Mediterranean-style diet is made up of vegetables, fruits, legumes, nuts, beans, cereals, grains, and unsaturated fats such as olive oil.

The new study has been conducted by researchers at Washington University School of Medicine in St. Louis and Cleveland Clinic, who warn of the spread of the Western diet.

‘Inflammatory bowel disease has historically been a problem primarily in Western countries such as the US, but it’s becoming more common globally as more and more people adopt Western lifestyles,’ said lead author Ta-Chiang Liu at Washington University.

‘Our research showed that long-term consumption of a Western-style diet high in fat and sugar impairs the function of immune cells in the gut in ways that could promote inflammatory bowel disease or increase the risk of intestinal infections.’

It’s already been known that Paneth cell impairment is a key feature of inflammatory bowel disease.

Paneth cells are a type of anti-inflammatory immune cell found in the intestines that helps to protect against microbial imbalances and infectious pathogens.

Dysfunction of these cells is driven by a combination of genetic mutations and environmental factors.

As an example, people with Crohn’s disease – a kind of inflammatory bowel disease characterised by abdominal pain, diarrhoea, anaemia and fatigue – often have Paneth cells that have stopped working.

To find the cause of Paneth cell dysfunction in humans, researchers analysed a database containing demographic and clinical data on 930 individuals, including an assessment of each person’s Paneth cells.

They found that high body mass index (BMI) was associated with Paneth cells that looked abnormal and unhealthy under a microscope.

BMI – a measurement based on weight in relation to height – defines whether a person is underweight, of a normal weight, overweight or obese.

For both people with and without Crohn’s disease, the higher their BMI, the worse their Paneth cells looked.

So, in other words, being overweight and obese was linked with abnormal Paneth cells.

To better understand this connection, the researchers then compared the effects of a western diet versus a standard diet – but in lab mice genetically predisposed to obesity.

Such mice chronically overeat because they carry mutations that prevent them from feeling full (much like some humans).

The scientists fed normal mice a diet in which 40 per cent of the calories came from fat or sugar, similar to the typical Western diet, and compared them to mice fed a normal diet.

After eight weeks, the mice that ate the western diet had more abnormal Paneth cells than the group that ate a standard diet.

In the western diet group, other changes become apparent two months after the Paneth cell defects, including increased gut permeability, where bacteria and toxins can enter the gut, which is well-linked with chronic inflammation.

Notably, however, Paneth cells returned to normal when the mice were put back on a healthy mouse diet for four weeks.

‘Obesity wasn’t the problem per se,’ Liu said. ‘Eating too much of a healthy diet didn’t affect the Paneth cells. It was the high-fat, high-sugar diet that was the problem.’

Whether people who habitually eat a Western diet can improve their gut immunity by changing their diet remains to be seen, according to Liu.

‘This was a short-term experiment, just eight weeks,’ Liu said. ‘In people, obesity doesn’t occur overnight or even in eight weeks.

‘People have a suboptimal lifestyle for 20, 30 years before they become obese.

‘It’s possible that if you have Western diet for so long, you cross a point of no return and your Paneth cells don’t recover even if you change your diet. 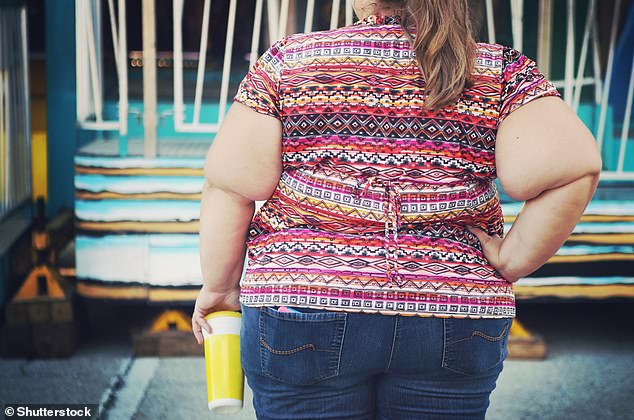 In people, obesity is frequently the result of eating a diet rich in fat and sugar. Pictured, an obese woman

‘We’d need to do more research before we can say whether this process is reversible in people.’

Further experiments showed that a molecule known as deoxycholic acid, a secondary bile acid formed as a byproduct of the metabolism of gut bacteria, forms the link between a Western diet and Paneth cell dysfunction.

Liu and colleagues now are investigating whether fat or sugar plays the primary role in impairing Paneth cells.

They also have begun studying ways to restore normal Paneth cell function and improve gut immunity by targeting the bile acid or the two immune molecules.

The findings have been published in the journal Cell Host & Microbe.