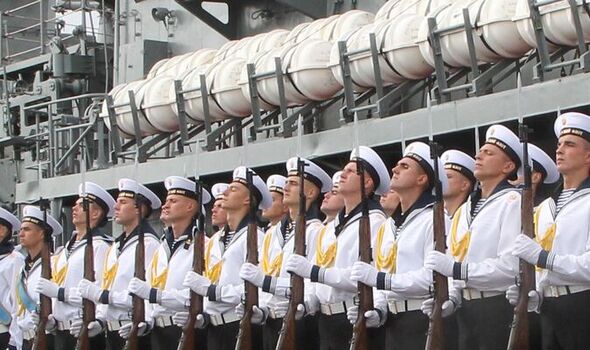 The latest intelligence from the Ministry of Defence estimates that there are 20 Russian navy vessels in the Black Sea, including submarines.

Russia’s navy have faced “embarrassing losses” in the form of the landing ship Saratov and the flagship Moskva, but British defence officials warn that they still have the force necessary to strike at the Ukrainian coast.

Asked on Sky News about the supply of weapons to Ukraine, Ben Wallace said: “We have said we will source and supply, if we can, anti-ship missiles.

“It’s incredibly important that grain that affects us all [through] food prices, does get out of Ukraine.”

Ukraine is often referred to as the “breadbasket of the world” for how much worldwde grain is produced in the country.

He added that Russia could not be allowed to “control the Black Sea” as “it’s not theirs anymore”.

“Making sure that Russian ships are not used to bombard cities is important.”

However, they have yet to get much closer to Ukraine’s coast – particularly since the sinking of the Moskva.

Russia attempt to downplay the sinking of its navy’s flagship vessel, even going so far as to post a widely-questioned video of its crew safe and sound on land, even as images of the ship exploding emerged online.

Despite Liz Truss’ bold remarks that Putin’s forces had to be forced out of “the whole of Ukraine”, Mr Wallace appeared less certain that this was possible.

He said: “I think what I would certainly say is, we are supporting Ukraine’s sovereign integrity. We’ve done that all along. That of course includes Crimea.

“But you know, first and foremost, let’s get Russia out of where they are now in its invasion plans.”