EXCLUSIVE: The coffee shop of the future? Café will open in Dubai next year with a ‘supermodel’ ROBOT cashier who can serve drinks and chat to customers

An eerily human-like robot cashier who can serve drinks and chit-chat with customers will soon be up and running in Dubai, meaning baristas could become a thing of the past.

Donna Cyber-Cafe is set to open in Dubai next year, with a ‘supermodel’ robot serving coffees and ice creams to customers, without the help of any humans.

Donna, who has been created to be the spitting image of Eastern European model Diana Gabdullina, will offer speedy service and will even be able to start conversations with customers, take selfies or tell a fairy tell for those who ask.

The impressive new droid has been created to appear like a real person, allowing Donna to read customer’s emotions and move in an eerily realistic way. 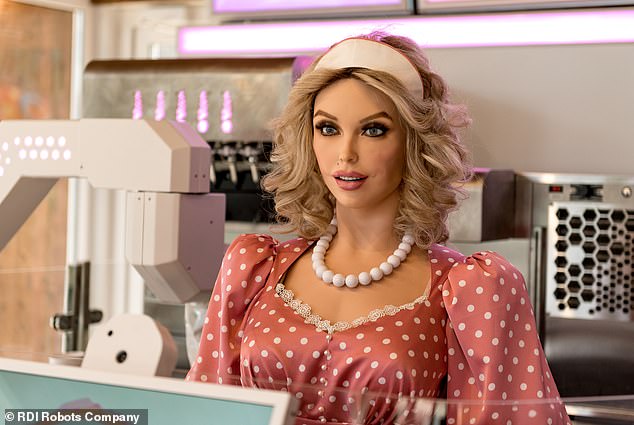 Donna Cyber-Cafe will be opening in Dubai next year. The new droid, named Donna, will be able to speak to customers, take selfies with them or even tell them a fairy tale 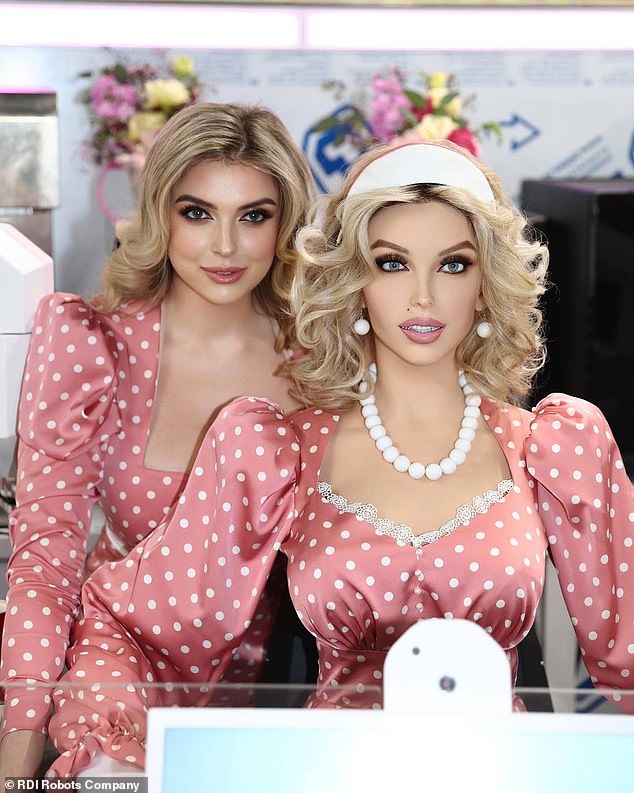 Donna has been based off Eastern European model Diana Gabdullina. Here the model (left) is pictured with her eerily similar robot look-alike (right)

What is a Robo-C2 and what can they do?

A Robo-C2 is a humanoid robot that is designed to mimic a human being.

The robot can be used in a number of different situations and for different job roles.

Companies creating Robo-C2 say they can recreate any person’s appearance.

Robo-C2 has a number of functions:

The robot has silicone skin and hyper-realistic eyes, and is also able to convey a wide range of micro expressions.

Creators of Donna, whose components are from Russia, say she has an ‘easygoing, feminine’ character, can be a ‘little ironic’ but is ‘of course, a responsible employee of the cyber cafe’.

The developers claim that the robots help give businesses a ‘competitive advantage’ and help attract new clients by improving customer loyalty and satisfaction.

The cafe, which will be open 24/7, will have a soft-serve ice-cream machine, a soft drink dispenser and a coffee machine with items being served to customers by robotic arms.

Customers will then pay at a self-service terminal.

Robo-C2 has seen a huge rise in popularity after gaining traction on TikTok.

One account, ran by creators Promobot, has almost three million followers and millions of likes on its videos showing the robots serving coffee, learning how to write and telling people jokes.

However, many of the videos showing the robots serving customers have sparked concerns that they could put people out of a job.

One user commented: ‘No thank you, we have humans who need work.’

Another said: ‘I want a person and if I walk into a place and a robot is serving, I am out of that door.’ 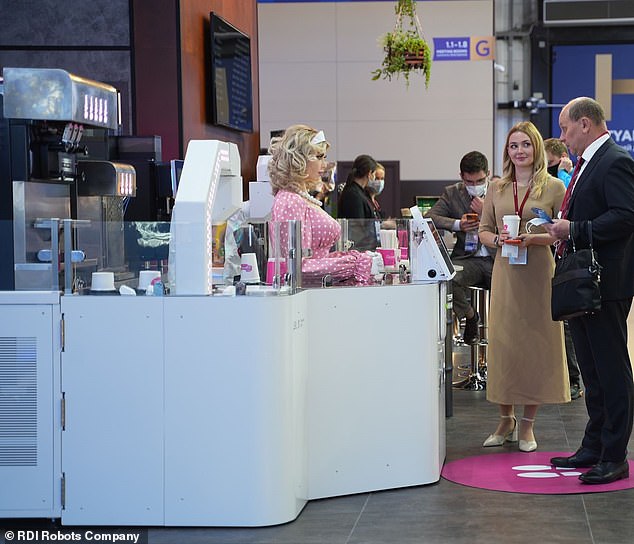 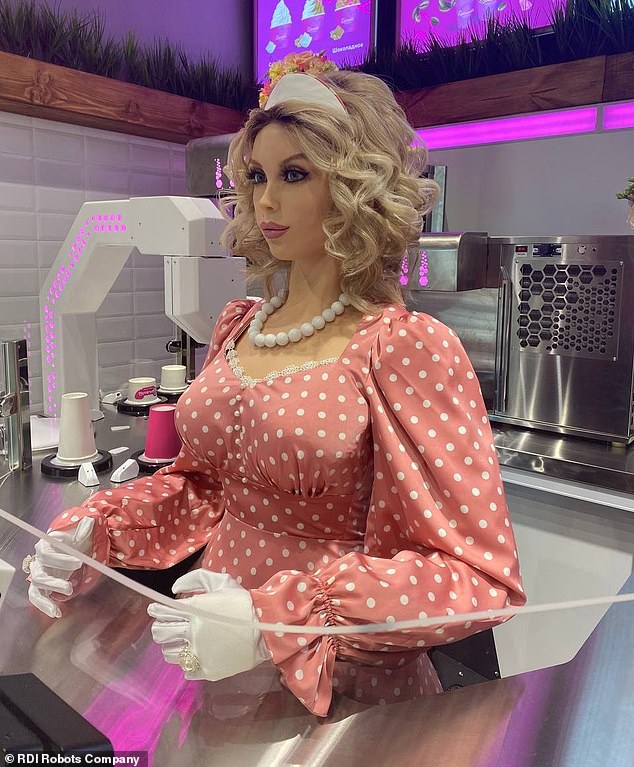 Videos of Robo-C2 have sparked a huge interest in the robots, gaining millions of views on TikTok. Not everyone is happy about the creation though, with some fearing it might put people out of a job 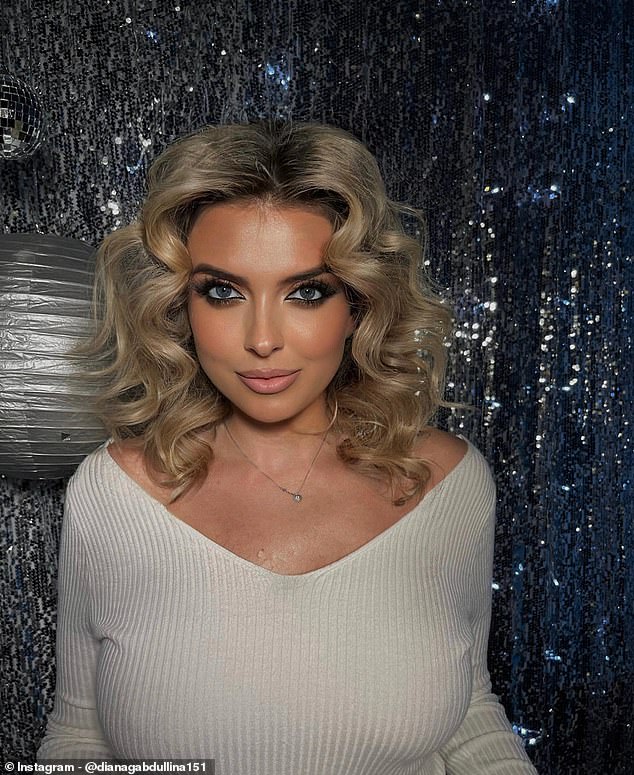 Donna has been modelled for 2014 perm beauty contest winner Diana Gabdullina. One of her robot look-alikes was used at Vladimir Putin’s economic forum in St Petersburg in June

Another added: ‘People should not support businesses like this. It would be the end of us.’

MailOnline has contacted to Promobot to find out the cost to buy a robot.

It is not the first time an uncanny robot has replaced humans working in the hospitality industry.

The female Android barmaid, spotted at the Russian President’s event and dubbed Dunyasha, was one of 20 identical barmaids, all made in the image of Ms Gabdullina. 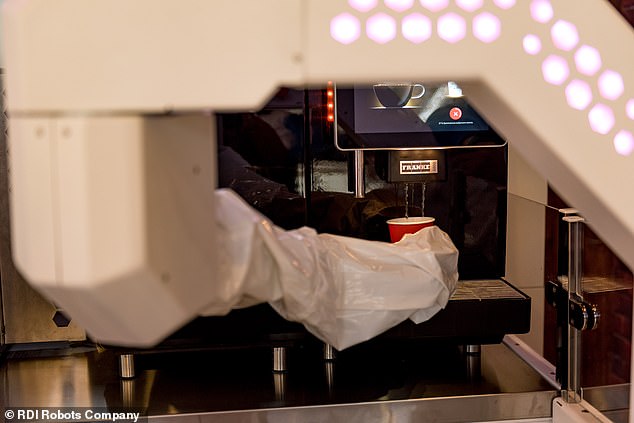 The coffee machine dispenser uses robotic arms to serve customers, while the hyper-realistic cashier speaks to guests as they wait for their drinks 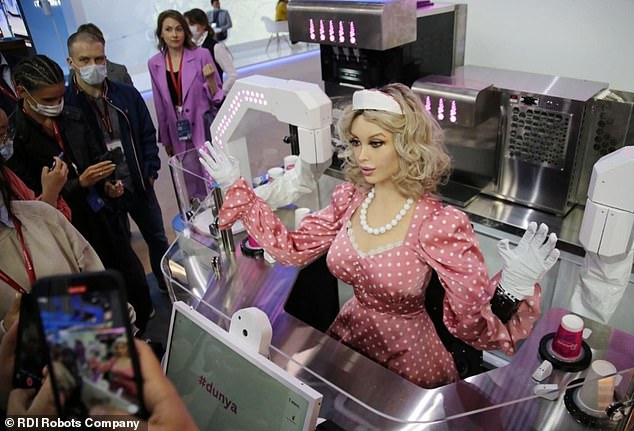 The first cafes will appear across Dubai in 2023. There are RDI robot products already working in 43 countries as administrators, promoters, consultants, guides and concierges, replacing the need for ‘live’ employees

Do you like our new robot? Her name is Dona and she will work at city park soon #ai #robot #humanoid

The winner of the 2014 perm beauty contest is married to Rashid Gabdullin, owner of the company who made the robot, The Mirror reported.

Those who visited the economic forum, however, blasted the robot’s outfit, slamming it as ‘resembling a mix of The Stepford Wives and Soviet shop assistants from the 1950s’.

The first cafes will appear across Dubai in 2023. There are RDI robot products already working in 43 countries as administrators, promoters, consultants, guides and concierges, replacing the need for ‘live’ employees.

Promobot robots can be found at Baltimore-Washington Airport and in Dubai Mall.

‘World’s most advanced’ humanoid robot Ameca says she’ll have working legs in less than a YEAR, in ‘jaw-dropping’ new video