The fourth of the 12 Caesars, Caligula — officially, Gaius Julius Caesar Germanicus — was a capricious, combustible first-century populist remembered, perhaps unfairly, as the empire’s most tyrannical ruler. As reported by Suetonius, the Michael Wolff of ancient Rome, he never forgot a slight, slept only a few hours a night and married several times, lastly to a woman named Milonia.

During the four years that Caligula occupied the Roman throne, his favorite hideaway was an imperial pleasure garden called Horti Lamiani, the Mar-a-Lago of its day. The vast residential compound spread out on the Esquiline Hill, one of the seven hills on which the city was originally built, in the area around the current Piazza Vittorio Emanuele II.

There, just on the edge of the city, villas, shrines and banquet halls were set in carefully constructed “natural” landscapes. An early version of a wildlife park, the Horti Lamiani featured orchards, fountains, terraces, a bath house adorned with precious colored marble from all over the Mediterranean, and exotic animals, some of which were used, as in the Colosseum, for private circus games.

When Caligula was assassinated in his palace on the Palatine Hill in 41 A.D., his body was carried to the Horti Lamiani, where he was cremated and hastily buried before being moved to the Mausoleum of Augustus on the Campus Martius, north of the Capitoline Hill. According to Suetonius, the elite garden was haunted by Caligula’s ghost. 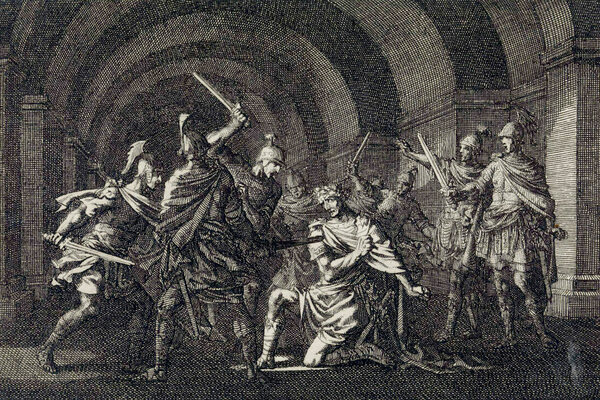 Historians have long believed that the remains of the lavish houses and parkland would never be recovered. But this spring, Italy’s Ministry of Cultural Heritage, Cultural Activities and Tourism will open the Nymphaeum Museum of Piazza Vittorio, a subterranean gallery that will showcase a section of the imperial garden that was unearthed during an excavation from 2006 to 2015. The dig, carried out beneath the rubble of a condemned 19th-century apartment complex, yielded gems, coins, ceramics, jewelry, pottery, cameo glass, a theater mask, seeds of plants such as citron, apricot and acacia that had been imported from Asia, and bones of peacocks, deer, lions, bears and ostriches.

“The ruins tell extraordinary stories, starting with the animals,” said Mirella Serlorenzi, the culture ministry’s director of excavations. “It is not hard to imagine animals, some caged and some running wild, in this enchanted setting.” The science of antiquities department of the Sapienza University of Rome collaborated on the project.

The objects and structural remnants on display in the museum paint a vivid picture of wealth, power and opulence. Among the stunning examples of ancient Roman artistry are elaborate mosaics and frescoes, a marble staircase, capitals of colored marble and limestone, and an imperial guard’s bronze brooch inset with gold and mother-of-pearl. “All the most refined objects and art produced in the Imperial Age turned up,” Dr. Serlorenzi said.

The classicist Daisy Dunn said the finds were even more extravagant than scholars had anticipated. “The frescoes are incredibly ornate and of a very high decorative standard,” noted Dr. Dunn, whose book “In The Shadow of Vesuvius” is a dual biography of Pliny the Elder — a contemporary of Caligula’s — and his nephew Pliny the Younger. “Given the descriptions of Caligula’s licentious lifestyle and appetite for luxury, we might have expected the designs to be quite gauche.”

The Horti Lamiani were commissioned by Lucius Aelius Lamia, a wealthy senator and consul who bequeathed his property to the emperor, most likely during the reign of his friend Tiberius from A.D. 14 to 37. When Caligula succeeded him — it is rumored that Caligula and the Praetorian Guard prefect Macro hastened the death of Tiberius by smothering him with a pillow — he moved into the main house.

In an evocative eyewitness account, the philosopher Philo, who visited the estate in A.D. 40 on behalf of the Jews of Alexandria, and his fellow emissaries had to trail behind Caligula as he inspected the sumptuous residences “examining the men’s rooms and the women’s rooms … and giving orders to make them more costly.” The emperor, wrote Philo, “ordered the windows to be filled up with transparent stones resembling white crystal that do not hinder the light, but which keep out the wind and the heat of the sun.”

Evidence suggests that after Caligula’s violent death — he was hacked to bits by his bodyguards — the house and garden survived at least until the Severan dynasty, which ruled from A.D. 193 to 235. By the fourth century, the gardens had apparently fallen into desuetude, and statuary in the abandoned pavilions was broken into pieces to build the foundations of a series of spas. The statues were not discovered until 1874, three years after Rome was made the capital of the newly unified Kingdom of Italy. With the Esquiline Hill in the midst of a building boom, the Italian archaeologist Rodolfo Lanciani nosed around freshly excavated construction sites and uncovered an immense gallery with an alabaster floor and fluted columns of giallo antico, considered the finest of the yellow marbles.

He later stumbled upon a rich deposit of classical sculptures that, at some point in the horti’s history, had been deliberately hidden to protect them. The treasures included the Lancellotti Discobolus, now housed at the National Museum of Rome; the Esquiline Venus and a bust of Commodus depicted as Hercules, now at the Capitoline Museums. In short time, the sculptures were carted off, the foundation of an apartment building was laid, and the ancient ruins were reburied.

The latest excavation of the horti unfolded under the detritus of the residences, which had been evacuated in the 1970s in the wake of a building collapse. Much like the 2012 exhumation of Richard III in Leicester, England, the unburying involved a modern parking site.

Sixteen years ago, the three-and-a-half-acre property was purchased by Enpam, a private foundation that manages pensions for Italian doctors and dentists. Exploratory core drilling for a new headquarters and a six-level underground garage brought forth a wealth of first-century relics, from the type of window glass described by Philo to lead pipes stamped with the name of Claudius, Caligula’s uncle and successor.

As construction crews erected the five-story office building, archaeologists in a trench 18 feet below street level gingerly screened and scraped away soil. In a study lab across town, paleobotanists and archaeozoologists analyzed fragments, and researchers painstakingly repaired a 10-foot-high wall fresco painted with pigment made from ground cinnabar. The entire $3.5 million conservation and restoration project was underwritten by Enpam.

Ground was broken for the Nymphaeum Museum in 2017. “The new space, in the basement of Enpam, brings to light one of the mythical places of the empire’s capital, one of the garden residences loved by the emperors,” said Daniela Porro, the museum director.

What all of this does for Caligula’s seemingly irredeemable reputation is an open question. He emerges from Suetonius’s “The Twelve Caesars,” written 80 years after the emperor was bumped off, as utterly depraved: having incestuous relationships with his sisters, sleeping with anyone he liked the look of, using criminals as food for his wild beasts when beef became too pricey and insisting that a loyal subject who had vowed to give his own life if the emperor survived an illness should carry through on his promise and die.

Mary Beard, a professor of classics at Cambridge University, posited that while Caligula might have been assassinated because he was a monster, it is equally possible that he was made into a monster because he was assassinated. In “SPQR,” her rich history of ancient Rome, she argues that “it is hard to resist the conclusion that, whatever kernel of truth they might have, the stories told about him are an inextricable mixture of fact, exaggeration, willful misinterpretation and outright invention — largely constructed after his death, and largely for the benefit of the new emperor, Claudius.”

Whether Caligula got a raw deal from history is a subject of hot and unyielding debate. “There is clearly some bias in the sources,” Dr. Dunn allowed. “But even without that, it is difficult to envision him as a good emperor. I doubt these new discoveries will do much to rehabilitate his character. But they should open up new vistas onto his world, and reveal it to be every bit as paradisiacal as he desired it to be.”