Cats are more susceptible to Covid-19 than dogs: Almost 10% of pet felines have coronavirus antibodies compared to just 1% of pups, study finds

Household cats are more susceptible to coronavirus infection than dogs, a new study has warned.

Researchers from the University of Minnesota looked at the prevalence of SARS-CoV-2 – the virus that causes Covid-19 – in the two most popular pets, dogs and cats.

They found that eight per cent of cats have antibodies for the virus, suggesting they’ve previously been infected.

However, less than one per cent of dogs were found to have these antibodies, suggesting they may be less susceptible to the virus.

Hinh Ly, co-author of the study, said: ‘Because companion animals can be the source of a range of infectious diseases, determining how susceptible the two most popular pet species in the United States are to SARS-CoV-2 — and how prevalent the disease may be among them — could have significant impacts for both human and animal health.’ 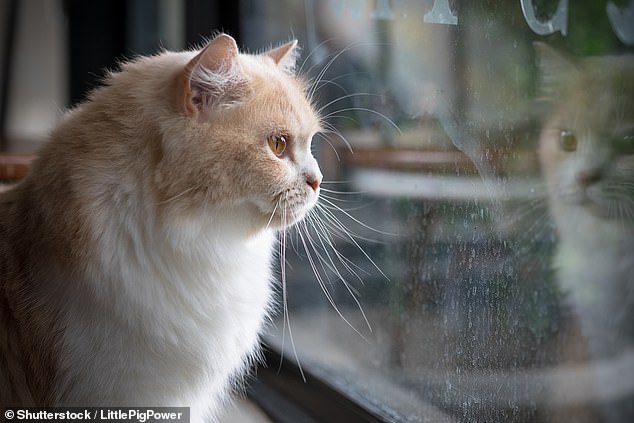 Household cats are more susceptible to coronavirus infection than dogs, a new study has warned

In the study, the team looked at samples from blood serum collected from 239 cats and 510 dogs between mid-April and mid-June 2020.

Two new serological tests were developed to look for the presence of antibodies, which indicate that an animal has previously been infected with the virus.

The tests revealed that eight per cent of the cats had antibodies in their blood serum.

However, less than one per cent tested positive for antibodies, suggesting that cats may be more susceptible than dogs.

Yuying Liang, co-author of the study, said ‘The results will help clarify the prevalence of cross-species transmission of this coronavirus among pets and their owners.’

The team is now performing a follow-up study covering the latter months of 2020, when the positivity rate of human Covid-19 cases reached its peak.

The study comes shortly after researchers from Utrecht University in the Netherlands revealed that coronavirus is common in cats and dogs if their owners have the virus.

Swabs from 310 pets in 196 homes where at least one human had been infected with Covid were taken by researchers.

Out of the pets six cats and seven dogs triggered a positive PCR test and another 54 had evidence of virus antibodies in their system.

Owners passing Covid-19 on to pets is a ‘negligible risk to public health’, according to researchers, but there is a possibility they could become a ‘reservoir’ and reintroduce it to humans after it has left the human population.

The main concern, according to study author Dr Els Broens, isn’t the health of the animal as they have mild or no symptoms, but rather the future risk to humans.

ANIMALS AND THEIR IMPACT ON COVID-19

The exact source of Covid-19 is unknown, according to the CDC, ‘but we know that it originally came from an animal, likely a bat.’

At this time, there is no evidence that animals play a significant role in spreading the virus, the CDC added.

Studies suggest that while animals can develop virus antibodies, the risk of passing it to humans, or between other animals is very low.

‘We are still learning about this virus, but we know that it can spread from people to animals in some situations, especially during close contact,’ the CDC has warned.

‘People with suspected or confirmed COVID-19 should avoid contact with animals, including pets, livestock, and wildlife.’

There is a risk of animals, particularly domestic pets, becoming a ‘reservoir’ for the virus, allowing it to be spread back to humans even after it has been removed from human populations.