Forget Boaty McBoatface, your chance to name an alien world has finally arrived!

An international competition has been launched to name 20 exoplanets that will be studied by the James Webb Space Telescope.

The International Astronomical Union (IAU), that is responsible for all naming in space, is holding the contest to mark the 10th anniversary of its Office for Astronomy Outreach.

To enter, participants must form a team made up of scientists, amateur astronomers and astronomy enthusiasts.

The group must then plan and stage an outreach event aimed at educating the public about exoplanets.

They can then choose their exoplanetary system to name, including both the planet and the star it orbits, and enter their proposal online.

All names will go through a selection process by a panel including IAU officials and the exoplanet discoverers.

Exoplanets are planets that orbit stars other than the sun, and most of them are only referred to by their scientific designations. Pictured: The 20 exoplanetary systems to be named in the competition, that are among the first targets of NASA’s James Webb Space Telescope 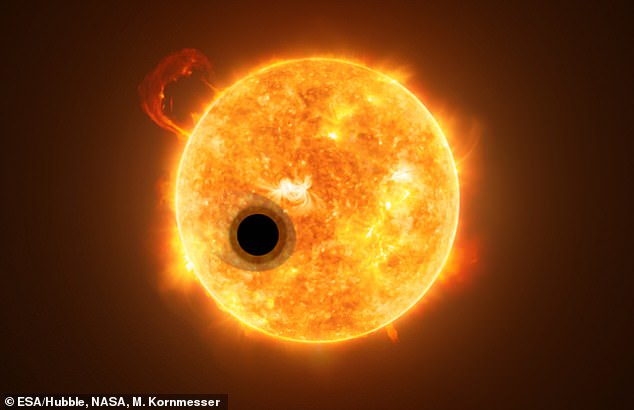 Proposed names ‘should be of things, people, or places of long-standing cultural, historical, or geographical significance, worthy of being assigned to a celestial object’. It could be related to astronomy, the sky or a constellation that the exoplanetary system is a part of, or be drawn from an indigenous language. Pictured: The exoplanet WASP-107b

THE EXOPLANETARY SYSTEMS TO BE NAMED IN THE COMPETITION

The following host stars/exoplanets are to be named in the competition.

Their scientific designations will not be replaced, but each system will be gaining an official public name.

Exoplanets are planets that orbit stars other than the sun, and over 5,000 have been identified since they were first discovered three decades ago.

Most of them are only referred to by their scientific designations and are not related to any cultural context.

The IAU has been in charge of cataloguing celestial objects since it was created in 1919, and infamously downgraded Pluto to a dwarf planet in 2006.

In 2015 and 2019 it held competitions to name certain stars and exoplanets, and is now hosting its third called NameExoWorlds 2022.

The 20 exoplanets in the competition are among the first targets of NASA’s James Webb Space Telescope (JWST).

The $10 billion (£7.4 billion) observatory was launched in December 2021 to study distant stars and planets with its four suites of onboard instruments.

It looks at the atmospheres of exoplanets to search for the building blocks of life elsewhere in the universe.

Its first set of photos were released last month, that included an atmospheric analysis of an exoplanet named WASP-96b, but more have since been discovered.

Unfortunately, even JWST cannot get a close-up image of an exoplanet, as they’re too far away.

NameExoWorlds 2022 is a collaboration between the Executive Committee Working Group on Exoplanetary Systems Nomenclature and the IAU Office for Astronomy Outreach.

They invite anyone in the world to form a team that can together propose a new name for one of the exoplanets and the star it orbits.

The team must put on an outreach event that can educate the public on exoplanets and related topics, like the possibility of otherworldly life.

Teams can then select the names of one planet and its host star – the ‘exoworld – which can be the result of a vote between team members.

They can then fill in an online form to submit their name proposal along with details of their outreach event.

The IAU have put forward a strict set of naming rules, to ensure that things do not go the way of 2016 vote to name a scientific research ship, where ‘Boaty McBoatface’ was the winner.

The names ‘should be of things, people, or places of long-standing cultural, historical, or geographical significance, worthy of being assigned to a celestial object’.

It could be related to astronomy, the sky or a constellation that the exoplanetary system is a part of, or be drawn from an indigenous language.

The planet and host star must follow a common naming theme, and the entrants should create a video presentation explaining their decision.

Names of real people, living or dead, trademarks, organisations and pets are not allowed, and submissions will be accepted up until November 11.

Entries will be separated by country, and one candidate along with two backups will be chosen to represent each one by national IAU panels.

The overall winners will be chosen for each exoplanetary system by an international selection committee that includes the exoplanet discoverer.

They will be selected ‘based on the description and meaning behind the names provided, and the outreach activities accomplished by each teams’.

Debra Elmegreen, IAU President, said: ‘It is exciting to have a new NameExoWorlds competition underway to celebrate the 10th anniversary of the Office for Astronomy Outreach.

‘Their work over the past decade has had a global impact, and this competition is yet another way to bring people together through astronomy.’

The James Webb Telescope: NASA’s $10 billion telescope is designed to detect light from the earliest stars and galaxies