Home » Conversations about others can help you to feel more connected

Is THIS why we love to gossip? Conversations about others can help you to feel more connected and form relationships, study finds

Gossiping about other people can make you feel more connected to those around you and even help you form better relationships, according to a new study.

Neuroscientists from Dartmouth College had a group of volunteers play a series of online games and monitored the role of gossip between the different participants.

The US researchers found that simply spreading rumours about someone doesn’t help to improve relationships, explaining that ‘only the right kind of gossip works’.

Having conversations about others with a third party and learning about people’s experiences helps cement social connections and broadens the mind, they said. 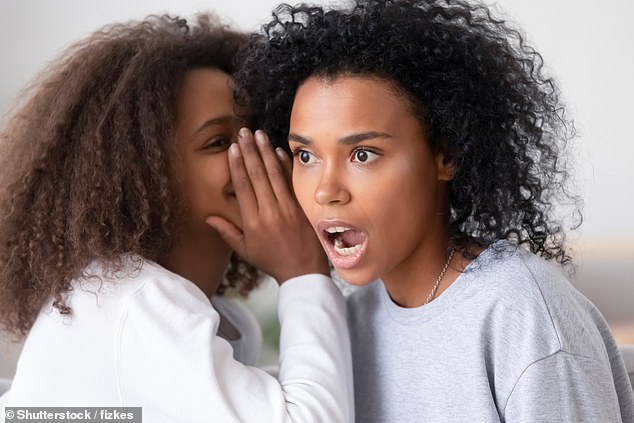 Gossiping about other people can make you feel more connected to those around you and even help you form better relationships, according to a new study. Stock image

A GAME TO ENCOURAGE GOSSIP

To capture social dynamics in an experimental setting, the team designed a large online experiment.

Individuals played one of four variants of a live and interactive 10-round repeated public-goods game in six-person groups.

Players were given $10 to either keep or invest in full or in part in a ‘group fund’ that grew by 1.5x each round that was shared equally among all players.

Over the course of the game study authors monitored for those more likely to ‘free ride’ and those acting in a more cooperative way.

In one version volunteers were able to see the actions made by all of their neighbours, while in another they could directly observe only a few.

This was crossed with the ability to communicate by exchanging up to two short, private, free-form messages with another individual during each round of the game.

Over the course of each game, repeated interactions occurred between the same groups of people.

Participants who chatted with each other felt the most connected at the end of the game and shared similar impressions of the other players in their group.

The findings, published in the journal Current Biology, build on previous research that revealed gossip makes up about 14 per cent of all daily conversations.

The team involved in the new study, led by Eshin Jolly and Luke Chang, wanted to find out why people gossip and what function it serves in human interaction.

Jolly described gossip as a ‘complex form of communication that is often misunderstood,’ adding that it can be a means of ‘substantive connection.’

In the online game, players were given money to either keep or invest in a group fund that then grows and is divided equally between the contributors.

Participants played 10 rounds of the game together in six-person groups, with each player given $10 to keep or invest any portion of it into a group fund.

The fund was multiplied by 1.5x and divided equally among the players, the study authors explained, saying it was designed to create an inherent tension between the ‘selfish freeriding’ and the ‘cooperative’ people involved in the game.

In some conditions, information was restricted so that participants could only observe the behaviour of a few other players in their group.

‘Our inspiration was creating a life-like scenario, in which you’re a member of a community and affected by the actions of all other community members, but most of whom you rarely observe and engage with directly,’ Jolly explained.

In some games, players could privately chat with another player in the group. This allowed players to relay information about other players’ behaviour to their partner, such as whether another player was freeriding.

Afterwards, players reported their willingness to play with each player again.

The study authors say their findings show that gossip is a ‘rich, multifaceted communication’ with several social functions.

Different types of gossip emerged depending on the amount of information available to each individual player, or the group of players involved.

Spontaneous conversations about others occurred more frequently during games when players could only observe the behaviour of a few of their group members.

When players could directly observe all of their group members, they tended to chit-chat and discuss a wider array of topics.

Participants relied on second-hand information from their partners to stay informed about other peoples’ behaviour that they could not see. 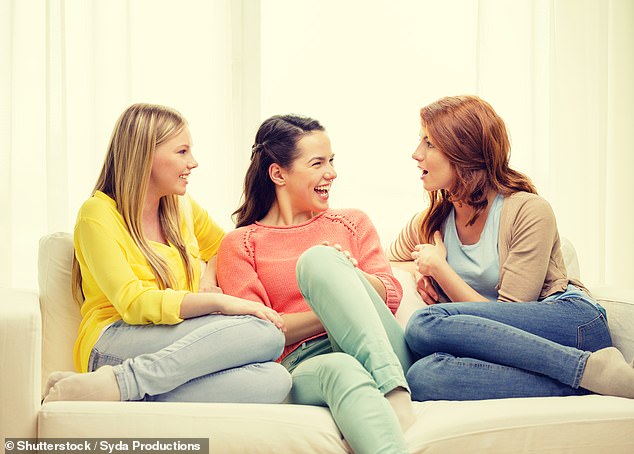 Neuroscientists from Dartmouth College had a group of volunteers play a series of online games and monitored the role of gossip between the different participants. Stock image

KEY FINDINGS OF THE GOSSIP STUDY

Across all games in which communication was possible, social topics constituted the majority of what individuals discussed.

The makeup of these topics differed based on information visibility.

Participants more frequently discussed others’ behaviour when it was not directly observable.

Unlike the folk view of gossip as baseless ‘trash talk,’ these exchanges served a clear social function – vicarious learning.

Participants adjusted their future behaviour based on knowledge of others’ unobserved past actions reported by their conversation partner.

This is despite being unable to directly observe these behaviours themselves.

These findings provide direct evidence that situational factors influence what gossip ultimately looks like and demonstrate that gossip can provide a rich source of information to aid in navigating the social environment.

The team say this illustrates how gossip enables individuals to learn from the experiences of others when direct observation is not feasible.

Participants who chatted with each other felt the most connected at the end of the game and shared similar impressions of the other players in their group.

Chang explained that by exchanging information with others, gossip is a way of forming relationships, as it ‘involves trust and facilitates a social bond that is reinforced as further communication takes place.’

In a typical public goods game, players contribute less over time and an unraveling effect occurs that propagates through a network of people.

However, in this study, cooperation declined less over time when players could privately communicate. Communication increased collective cooperation.

The researchers said gossip should not be relegated to just ‘baseless trash talk’.

According to the paper, the team’s findings on the role of gossip are consistent with creating a ‘shared reality’.

This is a scenario in which friends and colleagues often find common bonds, establish alliances, exchange personal information, and discuss the behaviour of others to establish a consensus of socially acceptable behaviour.

‘Gossip can be useful because it helps people learn through the experiences of others, while enabling them to become closer to each other,’ says Jolly.

The findings have been published in the journal Current Biology.

DO MEN GOSSIP AS MUCH AS WOMEN?

A shocking recent study revealed that men gossip as much as women.

And far from behaving like gentlemen, they are more likely than their female counterparts to b**ch about workmates.

Researchers quizzed more than 2,200 people about their gossiping habits and found that males and females are equally likely to share tittle-tattle in the office.

But while women tend to talk supportively about colleagues, men try to run rivals down.

The researchers suggested that gossip gave women a way to compete in a non-physically threatening manner, while for men it helped build their self-confidence.

The study, published in March and carried out by Ariel University in Israel, asked participants to imagine describing a person they had just met to a friend and analysed the responses.

‘The results indicated a statistically significant difference between genders, confirming that women’s gossip is encoded with more positivity than that of men.’