Graffiti or mediaeval artwork? Crosses etched on Jerusalem’s most sacred Christian church were NOT from vandals, but masons who were paid to carve them in the 15th century

Dozens of crosses litter the walls of the Jerusalem’s Church of the Holy Sepulchre that have long though to be the works of graffiti by Crusaders – until now.

Archaeologists determined the symbols were carved by 15th century masons who were paid by pilgrims looking for added insurance of salvation.

The discovery was made using three-dimensional imaging that allowed experts to identify the depth of each cross in the wall of a chapel on the grounds – all of which were the same and bore the masons’ markings.

The Holy Sepulchre is perhaps the holiest place in the Christianity faith, said to the site of Christ’s crucifixion, burial and resurrection. 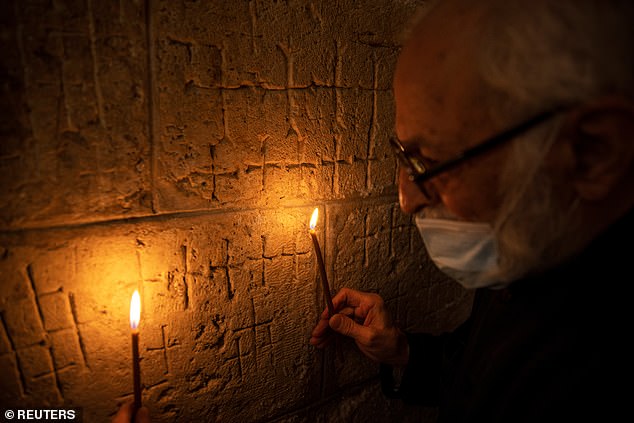 During 2018 renovations, archaeologists investigated mysterious crosses carved into the wall of the Chapel of Saint Helena inside the Church of the Holy Sepulchre in Jerusalem

Because of its popularity among worshippers, the Holy Sepulchre is usually bustling with pilgrims and clergy looking to feast their eyes on what may be the place where Jesus died.

Due to the large amount of visitor, studying the crosses in details has been previously difficult.

In 2018, renovations began at one of its chapels, one that featured thousands of close-bunched and hand-engraved crosses.

The pause in visitors gave researchers with the Israel Antiquities Authority and Hadassah Academic College Jerusalem an opportunity for research.

Working with the Armenian Orthodox Church, which controls the chapel, the team used digital cameras and three-dimensional imaging to map out, compare and date the crosses, located on the ancient stone walls of the Chapel of Saint Helena. 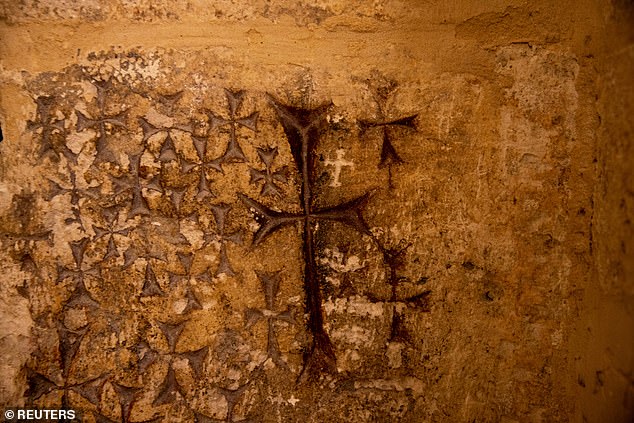 Using digital cameras and three-dimensional imaging, researchers determined the symbols were all the same depth and bore an artists’ mark. This upended the theory they were graffiti randomly carved by assorted visitors 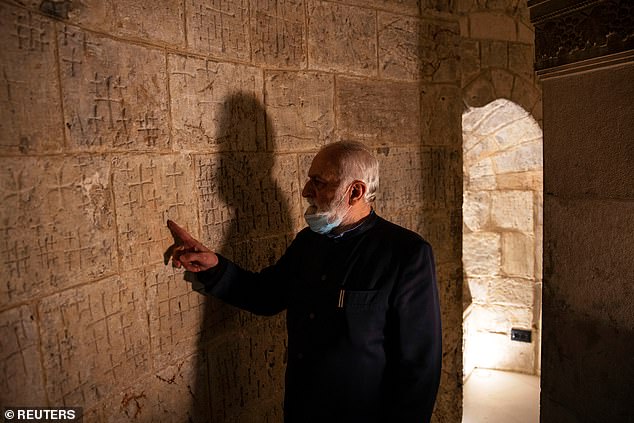 Father Samuel Aghoyan points to crosses on the chapel wall. Archaeologists theorize pilgrims paid a mason to carve the symbols as a means to ensure blessings on their behalf

‘This unique phenomenon always baffled us,’ said Amit Re’em, Jerusalem regional archaeologist for IAA. ‘Is it graffiti of the pilgrims, or rather, something else?’

The technology allowed Re’em and his colleagues to see that all the crosses had the same depth ‘and even the marking of the mason.’

He tentatively dated the carvings to the 15th century, when Jerusalem was controlled by Ottoman Turks.

‘Maybe two or three hand artists made these crosses,’ Re’em said. ‘So it’s not graffiti, it’s something more organized.’ 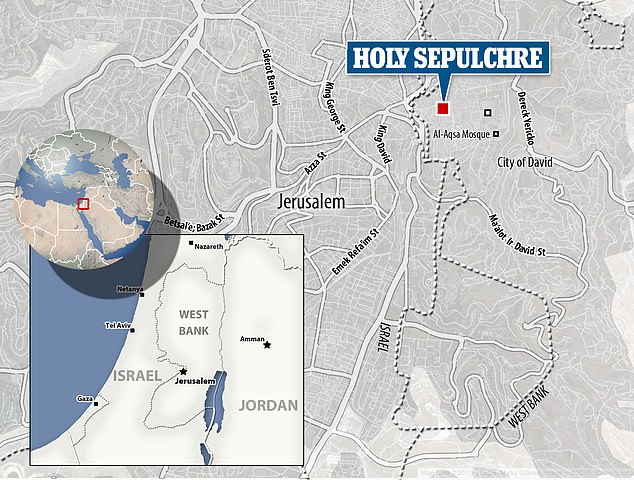 The Church of the Holy Sepulchre in Jerusalem is perhaps the holiest place in Christianity, said to be the site of Jesus’s crucifixion, burial and resurrection

He suggested an intercessionary purpose.

‘A special cross in the most sacred place for Christianity on Earth,’ he added.

Father Samuel Aghoyan, the Armenian superior at the Holy Sepulchre, saw benefits to the church from the research, especially as it struggles to emerge from COVID-19 lockdowns and prepares for Easter. 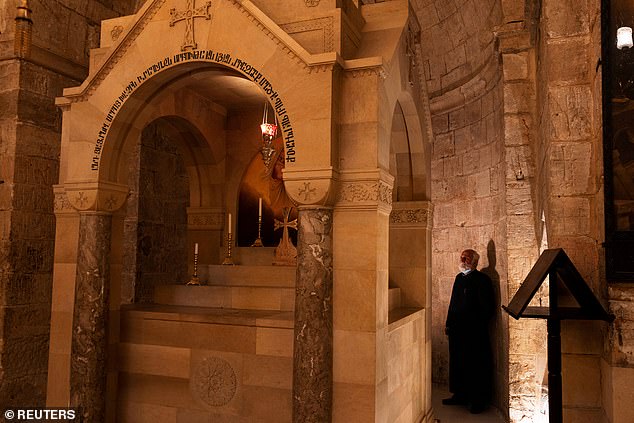 The Chapel of Saint Helena was built in the church’s lower level by Crusaders in the 12th century. It honors Emperor Constantine’s mother, Helena, who legend has it, discovered the physical remnants of the cross Jesus was crucified on 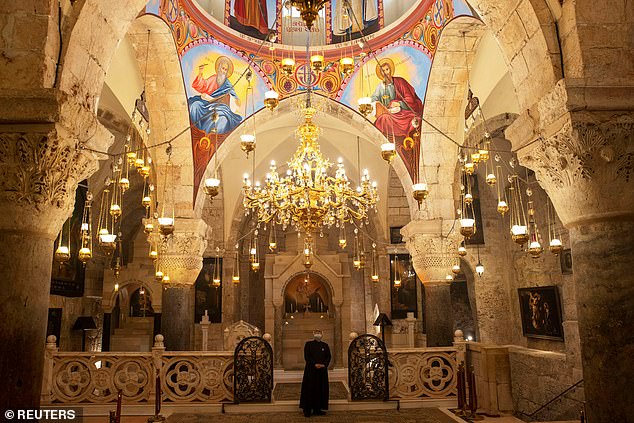 Scientists were able to study the crosses because the chapel was closed to tourists for renovations.  A new marble altar railing and tile flooring was added to the ancient house of worship

‘Now there are no pilgrims here, [but] still their spirit is here, we know, I believe in that,’ he said.

The Chapel of Saint Helena was built in the church’s lower level by Crusaders in the 12th century to honor Emperor Constantine’s mother, who legend has it, discovered the True Cross, the physical remnants of the cross Jesus was crucified on.

The chapel houses a chair Helena is reported to have sat on when she found the holy relic in 326 AD.

The renovations, started in 2017, added a new marble altar railing and tile flooring to the house of worship.

According to tradition, the Church of the Holy Sepulchre houses four of the Stations of the Cross, representing the final events in Jesus’ life.

It has been a major pilgrimage site for Christians since Constantinople ordered its construction the mid-4th century, on the site of a Roman temple devoted to Jupiter and Venus.

The original building was destroyed by a fire in 614 and, though it was rebuilt, it suffered severe damage from earthquakes and fires in the 8th and 9th centuries.

It was ordered destroyed by a Shia caliphate in 1009, only to be reconstructed some years later, with Crusaders conducing extensive repairs and adding new elements in the 12th century.

Since 1757, various Christian denominations — including the Roman Catholic, Greek Orthodox and Armenian Apostolic Churches — have divvied up responsibilities for the church.