EXCLUSIVE: Shocking footage shows ‘cruel’ experiments carried out on rodents at taxpayer-funded lab in Oregon where animals were piled with up to 15 bottles of wine a day and chained to cages

Shocking footage exclusively obtained by DailyMail.com reveals the conditions suffered by animals at a taxpayer-funded lab in Oregon.

Researchers from Oregon Health & Science University (OHSU) provided prairie voles with the equivalent of 15 bottles of wine a day and chained to cages as part of studies dubbed ‘innocuous’ and ‘cruelty for the sake of cruelty’ by experts with PETA.

The studies – published in November 2017 – aimed to determine if men are more likely to cheat on their partners while drunk using rodent models. And it received funding of $3 million from taxpayers.

It saw the animals confined in plastic shoebox-sized cages, bound to cell walls and forced to fight each other before all 150 were killed, along with the fetuses of pregnant females.

‘The $3 million used to fund tests could have gone directly to people who suffer from alcoholism.’ 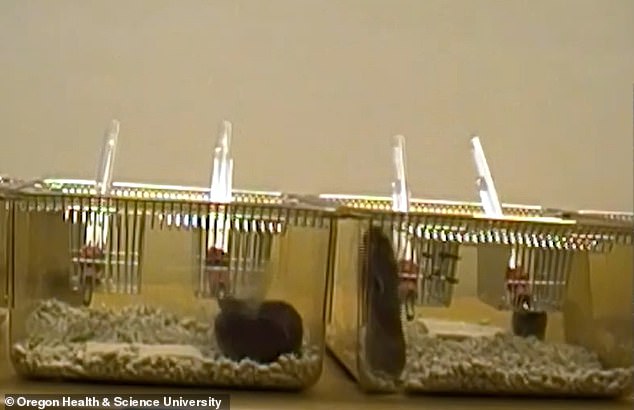 The video shows rows of small, plastic cages with two animals inside that have access to two bottles – one with alcohol and the other provided water

DailyMail.com contacted OHSU, which declined to comment but shared a statement it released in 2017.

OHSU responded to PETA’s question of ‘why these bizarre, pointless and deadly experiments were given institutional approval.’

‘OHSU’s views on this topic reflect those of other academic health centers, universities, physicians and scientists throughout the world.’

Prairie voles are small mice-like rodents found in central North America and were likely chosen by OHSU due to their monogamous bonds in which they mate for life.

However, Chandna said the animal’s biology does not mimic that of humans.

PETA became aware of the research when a press release surfaced detailing OHSU’s Partner Preference tests, which describes how male and female voles were given free access to alcohol-spiked water.

The video shows rows of small, plastic cages with two animals inside that have access to two bottles – one with alcohol and the other provided water.

Oregon Live reported that ‘some voles drank so much they staggered and fell and had trouble getting back on their feet.’

The experiments, published in the journal Frontiers of Psychiatry, describe 150 voles paired together for a week, allowing them to form bonds and mate.

The female was then chained to one side of the cage, while a female ‘stranger’ to the other.

One issue that comes from this, according to Chandna, is that voles are prey for large animals like foxes and coyotes, so inhibiting their ability to move in the cage ‘triggers a response of fear.’

‘Voles are prey animals, so for females to be tethered is cruel because it proves unimaginable fear in those animals,’ she told DailyMail.com.

The female voles tied to the ends of the cages can be seen struggling to break. 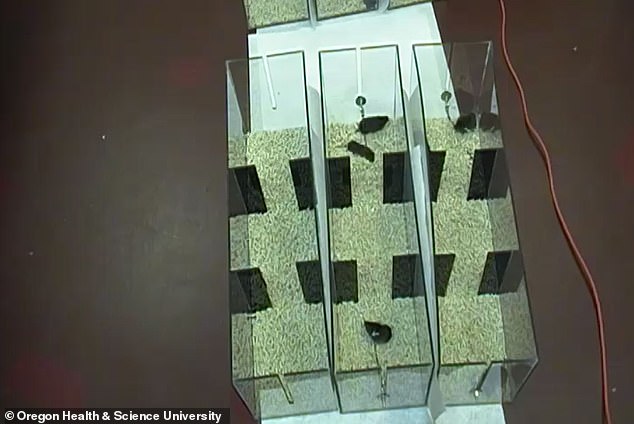 The female was chained to one side of the cage, while a female ‘stranger’ to the other 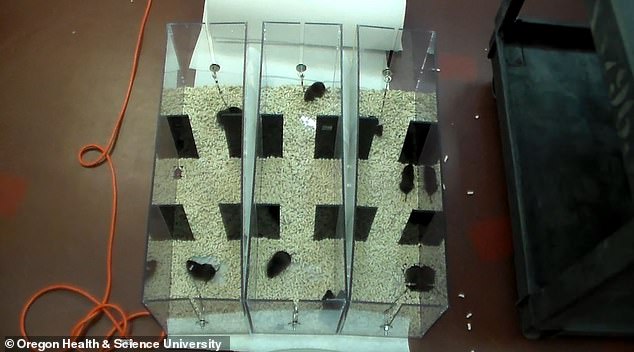 The drunk male vole was dropped into the cage, and allowed to roam freely, for researchers to see which female it spent more time with

The intoxicated male vole was dropped into the cage, able to roam freely, as investigators monitored how long it spent huddled with each female.

Chandna explained that the researchers were not looking to see if the male mated with either female but how long the male spent huddling with its partner and the stranger.

However, the male and female were only together for one week.

‘It wasn’t even real infidelity,’ she said. ‘The partners were just arbitrary pairs.’

‘I just don’t think it is revelatory. If you wanted to do a scientific research project, you could design a questionnaire or pull together people who will tell the truth about their behavior. It has been done!’

In another test, a male vole ‘intruder’ was dropped into a cage occupied by a ‘resident’ male to see if the two would fight over territory.

One vole climbs on the other and appears to gnaw at its head. And they are both looking for a way out of the cage.

A male vole is in a small cage and a researcher lowers another inside.

The pair immediately began to attack each other – head butting and punting each other to the sides of the cage. 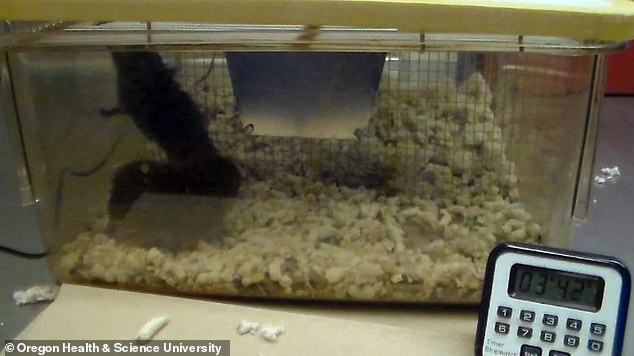 In another test, a male vole ‘intruder’ was dropped into a cage occupied by a ‘resident’ male to see if the two would fight over territory 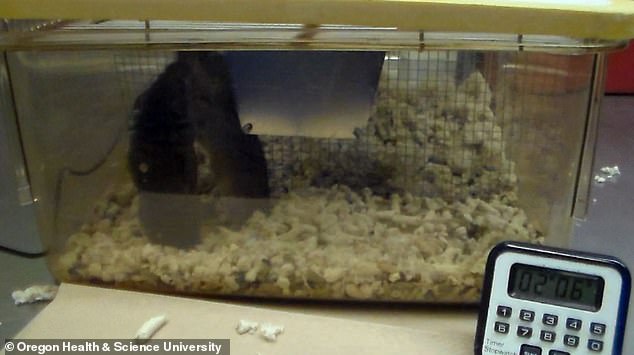 One vole climbs on the other and appears to gnaw at its head. And all while they are both looking for a way out of the cage. All 150 animals were killed after the experiments

Their fur is standing up and they lunge at each other with mouths open.

‘The theory around the intruder test is that a male who is more bonded to his ‘partner’ will be more aggressive in protecting his territory against ‘intruders’,’ said Chandna.

‘And so when the experimenters dropped an ‘intruder’ into a cage where a male was held, they would then count how many times the ‘resident’ male would attack, chase, lunge at, or bite the ‘intruder.’

Those markers for aggression were intended to also indicate how bonded the male was to his female partner. ‘

After the experiments concluded, the researchers euthanized the 150 voles to dissect their brains and fetus pulled from females, as noted in the study.

PETA told DailyMail.com that Andrey Ryabinin was the lead experimenter for the studies

OHSU’s study concludes: ‘Our studies provide the first evidence that alcohol has effects on established pair bonds and that partner drinking status plays a large role in these effects.’

‘There is human-relevant data regarding the neurobiology of human alcoholics and analyzing that info gives us relevant data,’ Chandna said.

PETA had approached the researchers to obtain the videos, but was told no evidence existed.

However, Oregon is one of the many US states with public records laws – state-funded labs must provide the public with documents and media upon request – absent certain exceptions.

An email exchange between Chandna and Reba Kuske, who is the public records Coordinator at OHSU, in February 2018 shows the university ‘confirmed there [were] no photographs and/or video footage available.’

Another email, dated October 22, 2018, shows that experimenter ‘Dr. Andrey Ryabinin confirmed the videos of resident-intruder test (as well as the partner preference test) are not available because these experiments were performed at the Veterans Administration Hospital.’

This statement would mean that OHSU did not own the videos and was not liable to hand them over to PETA.

PETA filed a suit in 2020 after OHSU refused to comply with the group’s public records request.

The response confirmed there were no photographs or video  footage available

OHSU was required to provide PETA with the footage as a result of the Freedom Information Act suit,

‘OHSU is a public institution that gets lots of public dollars and failed to comply with public record law,’ Chandna said.

‘We are fortunate to have attorneys who work pro bono. Regular citizens do not have that privilege.

A separate email chain in October 2018 states that experiments were not done inside the university, which means OHSU did not own the footage and could not give it to PETA

In 2012, the US Department of Agriculture (USDA) fined OSHU $12,000 after a PETA-prompted investigation. Since then, the USDA has issued warnings to the hospital on two separate accounts for the mistreatment of lab animals.

Most recently, in 2022,  the USDA charged the university with breaking federal animal welfare laws.

According to the complaint, a Mongolian gerbil died of starvation during an experiment in which a group of gerbils had their food rationed.

OHSU is followed by a string of other violations in which two lab monkeys were scalded to death after accidentally being placed in a high-temperature cage washer.

Another primate was injured after being caught in a drain cover and two others were euthanized due to delayed treatment after developing brain infections from experiments.