Watch stars move around the Milky Way’s supermassive black hole! Astronomers capture the deepest and sharpest images to date of the region around our central void

Astronomers have revealed the ‘deepest and sharpest images to date’ of the region around our Milky Way galaxy’s supermassive black hole.

The stunning new images, captured at various times earlier this year and released today by the European Southern Observatory (ESO), show several stars moving around their orbit of the black hole, Sagittarius A*.

ESO researchers used the Very Large Telescope (VLT), located in the Atacama Desert of northern Chile, to take the shots, which zoom in 20 times more than what was possible before.

They have also revealed a never-before-seen star close to the black hole, called S300 and provide the most precise estimate of the mass of the Milky Way’s central black hole to date – 4.3 million times that of the Sun. 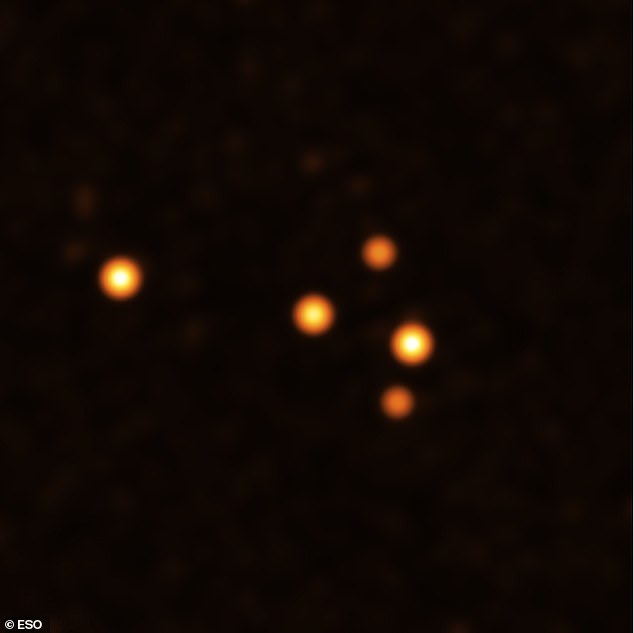 European Southern Observatory image taken on March 30, 2021 shows stars as little orange blobs around black hole Sagittarius A* at the centre of the Milky Way 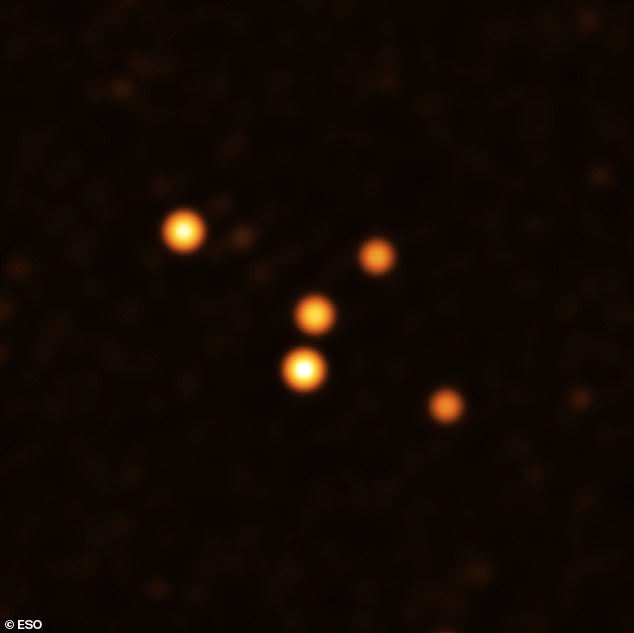 ESO images of stars around Sagittarius A* dated May 29 this year. S29 – the particularly bright star near the centre of this image, second from bottom – made its nearest approach to the black hole in late May 2021

SUPERMASSIVE BLACK HOLES ARE AT THE HEART OF GALAXIES

The achievement is detailed in two papers published today in Astronomy & Astrophysics, authored by a international team of experts. They wanted to learn more about Sagittarius A*, which is in the constellation of Sagittarius.

‘How massive is it exactly? Does it rotate? Do stars around it behave exactly as we expect from Einstein’s general theory of relativity?’ said Reinhard Genzel, a director at the Max Planck Institute for Extraterrestrial Physics (MPE) in Garching, Germany.

‘The best way to answer these questions is to follow stars on orbits close to the supermassive black hole. And here we demonstrate that we can do that to a higher precision than ever before.’

Black holes are regions of spacetime where gravity pulls so much that even light can not get out. They act as intense sources of gravity that hoover up surrounding dust and gas.

Stars in our galaxy, including our own Sun, circle Sagittarius A* due to its powerful gravitational pull.

These stars orbit the black hole trillions of miles away, but would be swallowed up if they were to come too close.

Luckily, Earth is around 27,000 light years away, or more than 150 trillion miles, from Sagittarius A*.

The galactic centre of the Milky Way is dominated by one resident, the supermassive black hole known as Sagittarius A*.

Pre-eminent yet invisible, Sgr A* has the mass equivalent to some four million suns.

At just 26,000 light years from Earth, Sgr A* is one of very few black holes in the universe where we can actually witness the flow of matter nearby.

Less than one per cent of the material initially within the black hole’s gravitational influence reaches the event horizon, or point of no return, because much of it is ejected.

Consequently, the X-ray emission from material near Sgr A* is remarkably faint, like that of most of the giant black holes in galaxies in the nearby universe.

The captured material needs to lose heat and angular momentum before being able to plunge into the black hole. The ejection of matter allows this loss to occur.

Evidence of a black hole at the centre of our galaxy was first presented by physicist Karl Jansky in 1931, when he discovered radio waves coming from the region.

The research team, known as the GRAVITY collaboration, developed a new technique to obtain the deepest and sharpest images yet of the galactic centre of our Milky Way.

They used the Very Large Telescope (VLT), a facility operated by ESO at the Paranal Observatory at Atacama Desert in northern Chile.

Telescopes that make up VLT can work together to form a giant ‘interferometer’ – the VLTI – which allows images to be filtered for any unnecessary obscuring objects.

‘The VLTI gives us this incredible spatial resolution and with the new images we reach deeper than ever before,’ said Julia Stadler, a researcher at the Max Planck Institute for Astrophysics in Garching.

‘We are stunned by their amount of detail, and by the action and number of stars they reveal around the black hole.’

With their latest observations, conducted between March and July 2021, the team focused on making precise measurements of stars as they approached the black hole.

This includes a star that had not been seen previously, called S300, and a star called S29, which made its nearest approach to the black hole in late May 2021.

S29 passed it at a distance of just 8 billion miles (13 billion km), about 90 times the Sun-Earth distance, at the stunning speed of 5,430 miles per second.

No other star has ever been observed to pass that close to, or travel that fast around, the black hole.

The researchers also managed to fine-tune the distance from Earth to Sagittarius A* to 27,000 light-years away.

Updates at the VLT facility later this decade will push the technique’s sensitivity further to reveal fainter stars even closer to the black hole.

The team aims to eventually find stars so close that their orbits would feel the gravitational effects caused by the black hole’s rotation. 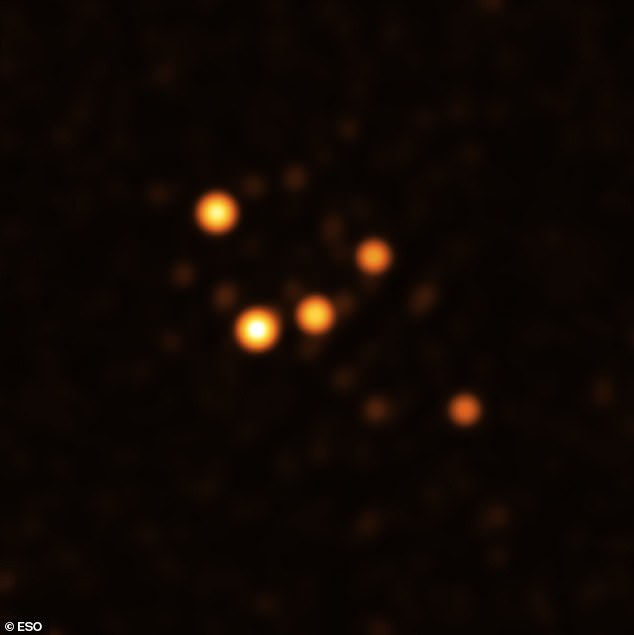 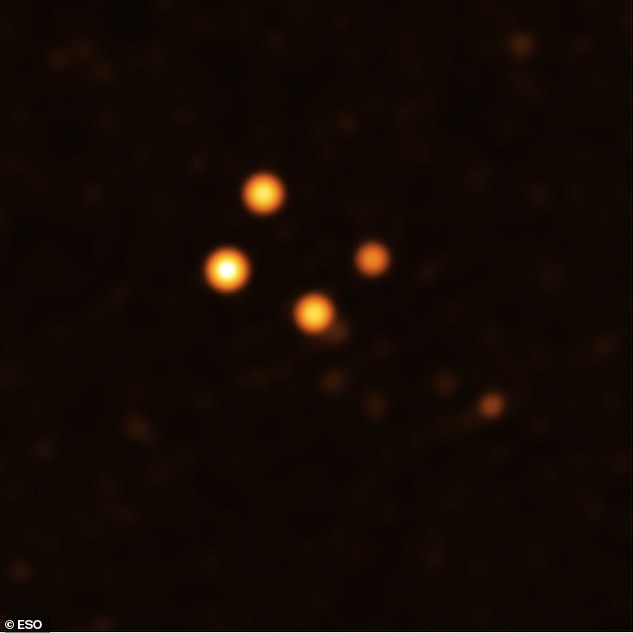 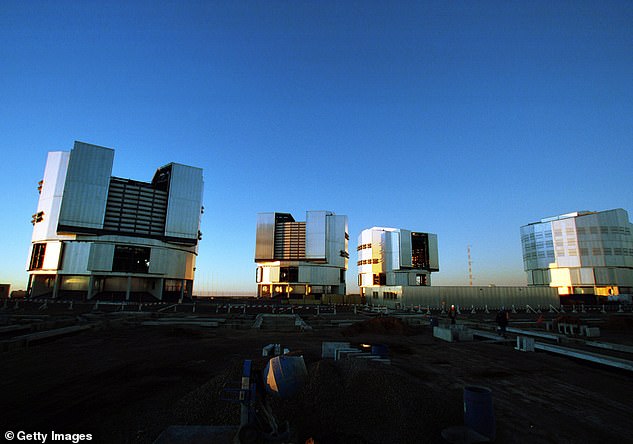 ESO’s upcoming Extremely Large Telescope (ELT), under construction in the Chilean Atacama Desert, will further allow the team to measure the velocity of these stars with very high precision.

It will also allow researchers to measure how fast the black hole spins – something nobody has been able to do before.

Both of the team’s papers are published today. The first paper is entitled ‘The mass distribution in the Galactic Centre from interferometric astrometry of multiple stellar orbits’.

The second paper is called ‘Deep images of the Galactic Center with GRAVITY’.

SAGITTARIUS A* HAS A LEAK! NASA’S HUBBLE SPACE TELESCOPE SPOTS A BLOWTORCH-LIKE JET IN OUR GALAXY’S CENTRAL VOID

Our Milky Way’s supermassive black hole has a ‘leak’, NASA scientists have revealed.

The black hole, Sagittarius A*, periodically emits a ‘blowtorch-like jet’ out into space through this leak, perhaps once every several thousand years, NASA says.

It’s thought the black hole ‘burps out’ this jet every time it swallows something hefty like a gas cloud, and the jet then hits a huge hydrogen cloud.

Data was taken from two of NASA’s telescopes – Hubble and Chandra – as well as from ALMA radio telescopes in Chile’s Atacama Desert, and the Very Large Array (VLA) in New Mexico.

Hubble hasn’t photographed the jet yet, which is why it refers to it as a ‘phantom jet’.