Home » Science » Direwolves from 'Game of Thrones' were real, but they went extinct because of this stunning reason

“Game of Thrones” may have excited viewers with tales of dragons and fictional heroes and heroines, but one aspect of the show was real, according to a new study: dire wolves.

According to research published in the scientific journal Nature, dire wolves existed from 125,000 years ago until 9,500 years ago. However, they may have gone extinct because they were unable to mate with modern-day gray wolves.

“Dire wolves are sometimes portrayed as mythical creatures – giant wolves prowling bleak frozen landscapes – but reality turns out to be even more interesting,” the study’s co-author, Kieren Mitchell, from the University of Adelaide, said in a statement. “Despite anatomical similarities between grey wolves and dire wolves – suggesting that they could perhaps be related in the same way as modern humans and Neanderthals – our genetic results show these two species of wolf are much more like distant cousins, like humans and chimpanzees.” 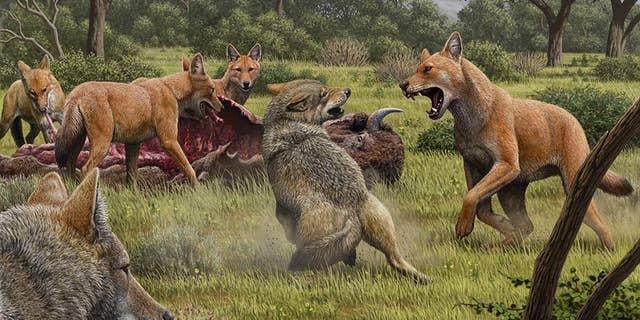 Somewhere in Southwestern North America during the late Pleistocene, a pack of dire wolves (Canis dirus) are feeding on their bison kill, while a pair of gray wolves (Canis lupus) approach in the hopes of scavenging. One of the dire wolves rushes in to confront the grey wolves, and their confrontation allows a comparison of the bigger, larger-headed and reddish-brown dire wolf with its smaller, gray relative. (Mauricio Antón/Nature)

‘UNICORN’ FROM THE ICE AGE MAY HAVE EXISTED AT THE SAME TIME AS HUMANS, SHOCKING DISCOVERY REVEALS

The researchers sequenced the DNA of five dire wolf fossils from the U.S., marking the first time DNA from dire wolves had been taken and studied.

“With this first ancient DNA analysis of dire wolves we have revealed that the history of dire wolves we thought we knew – particularly a close relationship to grey wolves – is actually much more complicated than we previously thought,” the study’s co-author Angela Perri added. “Instead of being closely related to other North American canids, like grey wolves and coyotes, we found that dire wolves represent a branch that split off from others millions of years ago, representing the last of a now extinct lineage.”

“When we first started this study we thought that dire wolves were just beefed up grey wolves, so we were surprised to learn how extremely genetically different they were, so much so that they likely could not have interbred,” study co-author Laurent Frantz explained. “Hybridisation across Canis species is thought to be very common, this must mean that dire wolves were isolated in North America for a very long time to become so genetically distinct.”

Though gray wolves have interbred with other species, such as dogs, coyotes and jackals, the dire wolf was a “highly divergent lineage” that split from existing canines around 5.7 million years ago, the study’s abstract stated.

“While ancient humans and Neanderthals appear to have interbred, as do modern grey wolves and coyotes, our genetic data provided no evidence that dire wolves interbred with any living canine species,” Mitchell added. “All our data point to the dire wolf being the last surviving member of an ancient lineage distinct from all living canines.”

It’s believed that dire wolves were common during the Pleistocene era, with the researchers adding they had “an early New World origin,” while gray wolves, coyotes and dholes “evolved in Eurasia and colonized North America only relatively recently.”