Home » Science » Drought did not spark the collapse of the Maya, study suggests

Drought did NOT spark the collapse of the Maya because the ancient civilisation had more than 50 hardy plants they could eat during the 9th century, new study claims

Drought did not spark the collapse of the ancient Maya civilisation in Central America by decimating food sources, a new study has claimed.

By analysing what’s already known about the Mayan diet, researchers found the civilisation had access to more than 50 hardy and edible plants that would have survived an extreme multi-year drought at the end of the ninth century, and over 400 species that were in some way drought-resistant.

Originating around 2600 BC, the Maya civilisation thrived in Central America for nearly 3,000 years, reaching its height between AD 250 to 900.

Noted for the only fully developed written language of the pre-Columbian Americas, the Mayas had highly advanced art and architecture as well as mathematical and astronomical systems.

The new study casts doubt on a leading theory that drought was the driver of the ancient Mayan civilisation’s collapse, although the authors don’t know exactly did lead to their downfall. 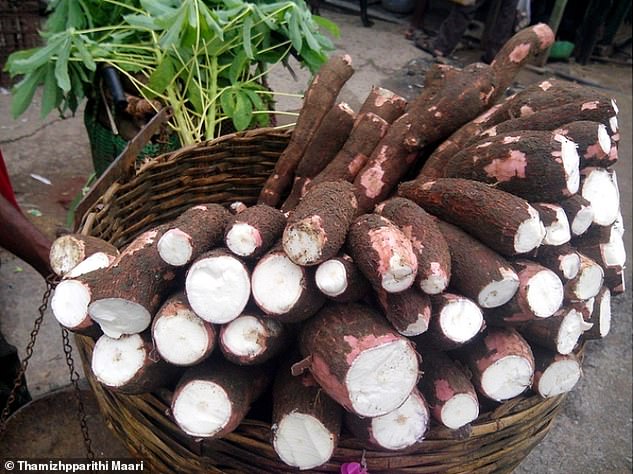 Cassava, a drought-resistant edible plant grown by the ancient Maya people, who thrived in Central America for nearly 3,000 years

Originating around 2600 BC, the Maya civilisation thrived in Central America for nearly 3,000 years, reaching its height between AD 250 to 900.

The ancient Maya created one of the world’s most brilliant and successful civilisations.

The new study was carried out by archaeologist Scott L. Fedick and plant physiologist Louis S. Santiago at the University of California, Riverside.

Even if parts of the Mayan civilisation were affected by extreme drought, many  plant species would have survived.

What’s more, the plant species susceptible to drought could have been transported from areas less affected by drought in the vast Mayan Empire, which spread all the way from central Mexico to Honduras, Guatemala, and northern El Salvador. It is estimated that at its maximum, the civilisation had at least 10 million people.

There is no doubt that a series of droughts occurred in the Yucatan Peninsula of southeastern Mexico and northern Central America at the end of the ninth century, when Maya cities mysteriously began to be depopulated.

Believing the Maya were mostly dependent on drought-sensitive corn, beans, and squash, some scholars assume the droughts resulted in starvation.

Unable to find a master list of indigenous Maya food plants, Fedick recently compiled and published one that draws on decades of Maya plant knowledge.

Faced with much speculation about drought as the cause of Maya social disruptions, he and Santiago decided to examine all 497 plants on the list for drought tolerance.

During a short-duration drought, 84 species, would not have survived an extended dry season – but this would have left a hefty total of 413 plant food species available for consumption. 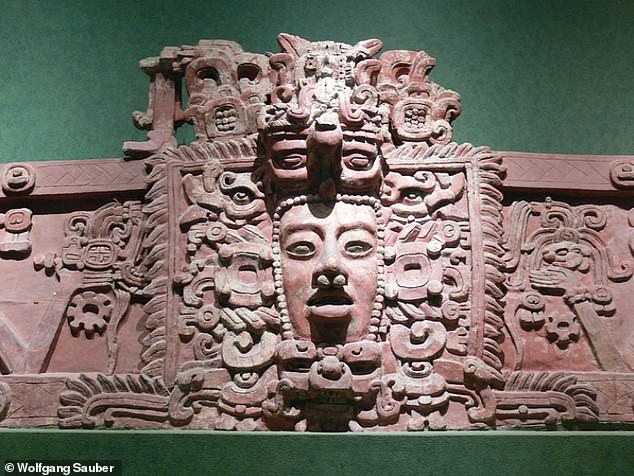 The ancient Maya created one of the world’s most brilliant and successful civilisations. Pictured, an early Maya mask 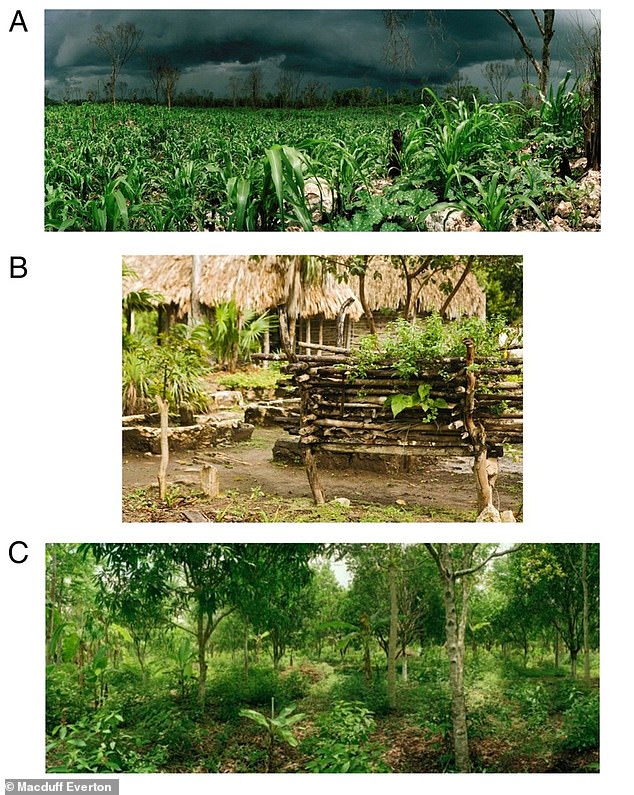 Admittedly, the longer a drought went on, the fewer food sources there would have been that were available, but arguably not too few to cause starvation.

In an extreme multi-year drought, an additional 52 species would cease to be available as food sources, leaving 56 species with 56 edible parts that would still be harvestable. 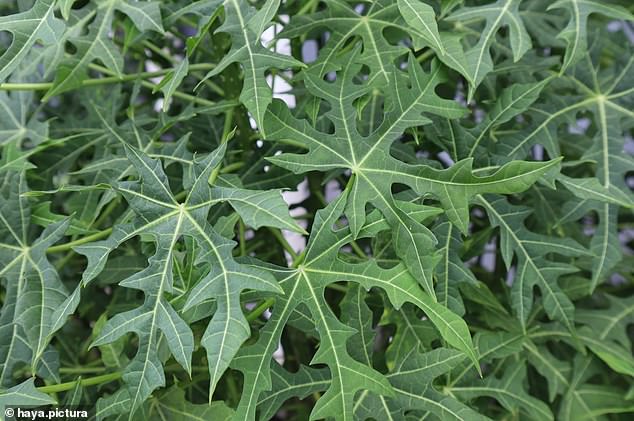 Pictured, chaya or tree spinach, a large, fast growing leafy perennial shrub that is believed to have originated in Mexico

Some of the toughest plants the Maya would have turned to include cassava with its edible tubers, and hearts of palm, an unusual-looking vegetable cut from the core of some palm tree species.

Another is chaya, a shrub domesticated by the Maya and eaten today by their descendants, with leaves high in protein, iron, potassium and calcium.

‘Chaya and cassava together would have provided a huge amount of carbohydrates and protein,’ Santiago said.

Though the researchers do not have a clear answer about why ancient Maya society unravelled, they suspect social and economic upheaval played a role.

‘One thing we do know is the overly simplistic explanation of drought leading to agricultural collapse is probably not true,’ Fedick said. 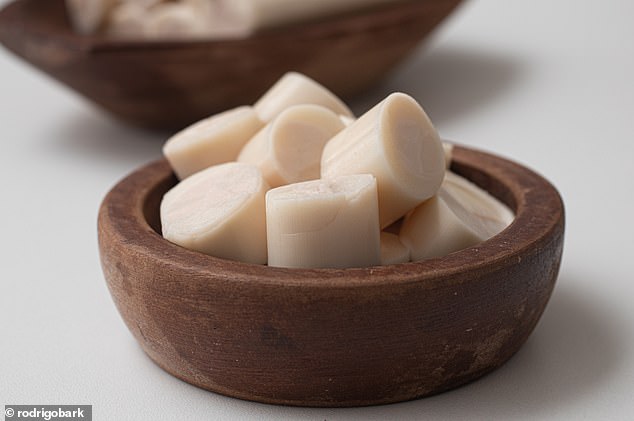 Regardless, the study provides modern-day humans with ‘ancient Maya lessons’ on surviving drought – by exploiting a variety of plants – in the face of potentially catastrophic climate change this century.

‘Even given a series of droughts, maintaining a diversity of resilient crops would enable people, both ancient and modern, to adapt and survive,’ Santiago said.

The study, published in Proceedings of the National Academy of Sciences, challenges the findings of another research team last year.

Another 2019 study by Northern Arizona University experts looked at the role of diet in the ability of the ancient Maya to withstand climate stress, based on remains of 50 human burials from the ancient Maya community of Cahal Pech, Belize.

They found that an increase in the elite Maya’s preference for corn may have made the population more vulnerable to drought, contributing to its societal collapse.

THE MAYA: A POPULATION NOTED FOR ITS WRITTEN LANGUAGE, AGRICULTURAL AND CALENDARS

The Maya civilisation thrived in Central America for nearly 3,000 years, reaching its height between AD 250 to 900.

Noted for the only fully developed written language of the pre-Columbian Americas, the Mayas also had highly advanced art and architecture as well as mathematical and astronomical systems.

During that time, the ancient people built incredible cities using advanced machinery and gained an understanding of astronomy, as well as developing advanced agricultural methods and accurate calendars.

The Maya believed the cosmos shaped their everyday lives and they used astrological cycles to tell when to plant crops and set their calendars.

This has led to theories that the Maya may have chosen to locate their cities in line with the stars.

It is already known that the pyramid at Chichen Itza was built according to the sun’s location during the spring and autumn equinoxes.

When the sun sets on these two days, the pyramid casts a shadow on itself that aligns with a carving of the head of the Mayan serpent god.

The shadow makes the serpent’s body so that as the sun sets, the terrifying god appears to slide towards the earth.

Maya influence can be detected from Honduras, Guatemala, and western El Salvador to as far away as central Mexico, more than 1,000km from the Maya area.

They maintain a distinctive set of traditions and beliefs that are the result of the merger of pre-Columbian and post-Conquest ideas and cultures.