Drunk witnesses are no less accurate at recalling details of crime than sober people – but are less confident about their memory, study finds

Drunk witnesses to crime are no less accurate when recalling details of what they have seen than sober people, a study has suggested.

The research, from Abertay University in Dundee and London South Bank University, found people who had consumed alcohol were less confident and recalled fewer details than those who had not, but were no more likely to include errors.

It also showed that people who discuss what they have witnessed with others can provide less reliable testimony.

The researchers said the results mean police, judges and jurors should be aware drunk people’s version of events may not be less accurate than others.

They stressed, however, that their research looked at people who had only mild to moderate alcohol intoxication and were asked to recall details with little delay. 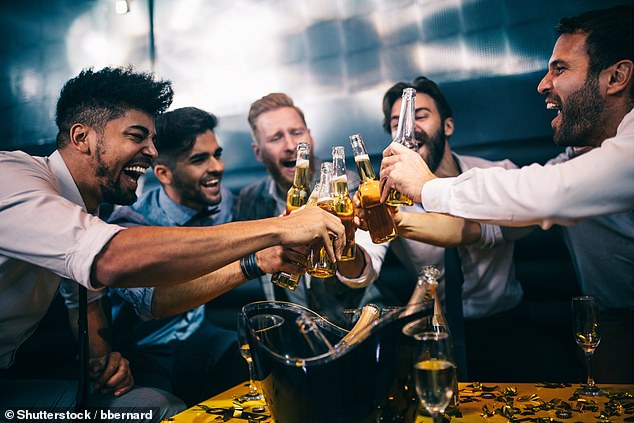 Drunk witnesses to crime are no less accurate when recalling details of what they have seen than sober people, a study has suggested (stock image)

Animal and human DNA can be collected from the air in a room, according to scientists reporting in the journal PeerJ in 2021.

Air sucked from a room and pumped through an ultra-fine filter was able to capture DNA shed by a person’s body, called environmental DNA (eDNA).

If a criminal is suspected to have passed through a crime scene, analysing the air could reveal their DNA and therefore, their identity.

Environmental DNA has previously been detected in water, soil and snow and used as a way of studying fish, animals and invasive species.

The study was led by Dr Elizabeth Clare, a senior lecturer at Queen Mary University of London

‘Here we provide the first published evidence to show that animal eDNA can be collected from air, opening up further opportunities for investigating animal communities in hard to reach environments such as caves and burrows,’ Dr Clare said.

Some people who took part in the study were sober and others had drunk vodka and orange juice.

Both groups were asked to recall details from videos showing a mock theft.

Participants were tested in pairs and each person watched a different version of the crime, although they were made to believe that they watched the same video.

The study found people who engaged in discussion incorporated errors into their testimony almost seven times more often than those who recalled alone.

A total of 87.7 per cent of these participants gave at least one piece of incorrect information that they had not actually seen themselves, but had heard about from their co-witness.

The drunk participants were no more likely to make the errors than those who were sober.

It was also found that drunk participants were not less accurate than sober ones, but their accounts were less detailed.

Drinking alcohol also had a negative effect on a participants’ confidence, meaning they thought their memory was less accurate when in fact it was not.

Dr Julie Gawrylowicz of Abertay University, co-leader on the study, said: ‘Contrary to perceptions commonly held by the general public and many professionals working within the criminal justice system, our findings suggest that mild to moderate alcohol intoxication does not make individuals more susceptible to incorporating misleading information obtained from a co-witness.

‘Our work also shows that alcohol does impact recall completeness but not accuracy, so mild to moderately intoxicated witnesses may be regarded as a reliable source of information, even if questioned in an intoxicated state.

‘It is important to note though, that this study tested memory at low to moderate intoxication levels, with a minimal delay before recall, and no other influencing factors.

‘Those involved in the criminal justice chain, including police, judges and jurors, should therefore be aware that although mildly to moderately intoxicated witnesses might report fewer details and might be less confident in their accounts, their version of events might not be necessarily less accurate.’

She added: ‘The results also show there is clear potential for all witnesses, sober and intoxicated alike, who discuss a crime with a co-witness, to report information that they did not see but have just heard about from the other witness.

‘This indicates it may be important to minimise co-witness discussion where a crime has been witnessed in public settings, such as bars and restaurants.’

The study was published in the journal Psychopharmacology.

DO YOU DRINK TOO MUCH ALCOHOL? THE 10 QUESTIONS THAT REVEAL YOUR RISK

One screening tool used widely by medical professionals is the AUDIT (Alcohol Use Disorders Identification Tests). Developed in collaboration with the World Health Organisation, the 10-question test is considered to be the gold standard in helping to determine if someone has alcohol abuse problems.

The test has been reproduced here with permission from the WHO.

To complete it, answer each question and note down the corresponding score.

0-7: You are within the sensible drinking range and have a low risk of alcohol-related problems.

Over 8: Indicate harmful or hazardous drinking.

8-15: Medium level of risk. Drinking at your current level puts you at risk of developing problems with your health and life in general, such as work and relationships. Consider cutting down (see below for tips).

16-19: Higher risk of complications from alcohol. Cutting back on your own may be difficult at this level, as you may be dependent, so you may need professional help from your GP and/or a counsellor.

20 and over: Possible dependence. Your drinking is already causing you problems, and you could very well be dependent. You should definitely consider stopping gradually or at least reduce your drinking. You should seek professional help to ascertain the level of your dependence and the safest way to withdraw from alcohol.

Severe dependence may need medically assisted withdrawal, or detox, in a hospital or a specialist clinic. This is due to the likelihood of severe alcohol withdrawal symptoms in the first 48 hours needing specialist treatment.