Bee-united! Endangered species of bumblebee has been spotted for the first time in 44 years at Devon’s Prawle Point

An endangered species of bumblebee has been spotted for the first time in 44 years in south Devon.

It was once thought to be extinct in the county, however the species has been seen in north Devon in recent years, and now at Prawle Point in the south.

The rediscovery was made through the ‘Life on the Edge’ project, which aims to restore populations of the UK’s rarest insects and plants living on the south Devon coastline. 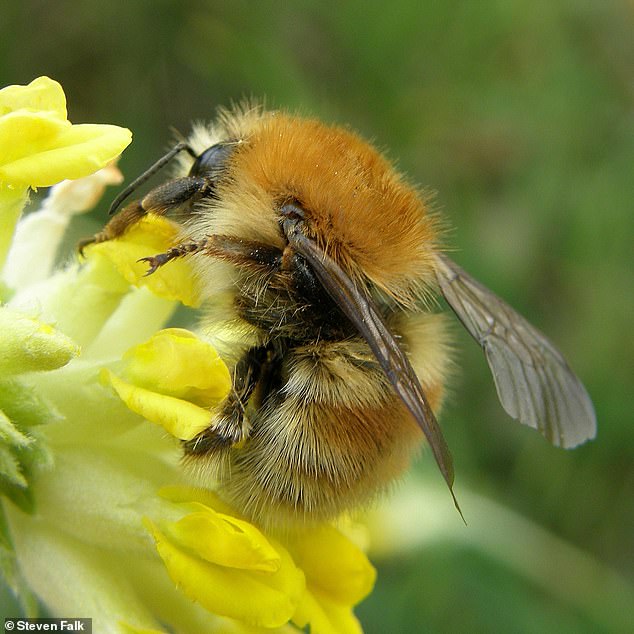 The overall abundance of pollinators is thought to have declined in the UK since the 1970s.

Similar trends in other countries – especially the USA, where domestic honey bee stocks have declined by 59 per cent – have led to claims of a global pollination crisis.

There are many possible causes for this decline, including agricultural intensification, increases in pests and diseases, agrochemicals such as neonicotinoid pesticides, climate change, and the reduction in beekeeping.

Hayley Herridge, Life on the Edge Conservation Officer says ‘This recent discovery as part of a wider rare invertebrate survey on the South Devon coast, is our headline news of the summer!

‘We are delighted that a species lost, has been rediscovered at Prawle Point for the first time since 1978.

‘Prawle Point is considered the most important location for rare invertebrates in our project area and this highlights how special it is.’

The Brown-banded Carder bee is a ginger-brown species, often with a darker brown band on its second abdominal segment.

It is similar to the two other ginger Carders – the Common Carder and Moss Carder – however it has no black hairs on its abdomen but some around its wing bases.

The pollinating species lives in open grasslands rich with wildflowers – like clovers, Bird’s-foot Trefoil, red bartsia and knapweeds – in the south of England and Wales.

However the loss of this type of habitat, through urban development and intensive farming, has resulted in population decline.

Conservationists say that the rediscovery of the endangered bee highlights the need for flower-rich wildlife ‘super highways’.

These would connect the best remaining insect habitats across the country, allowing threatened species to move in response to environmental pressures like climate change. 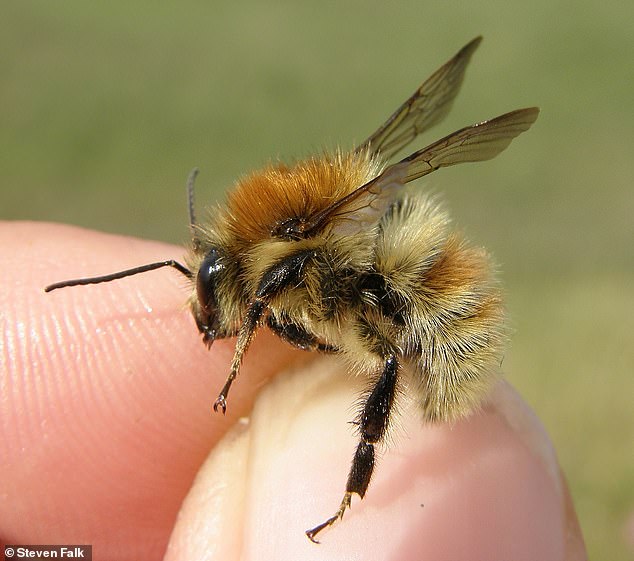 The Brown-banded Carder bee (pictured) is a ginger-brown species, often with a darker brown band on its second abdominal segment 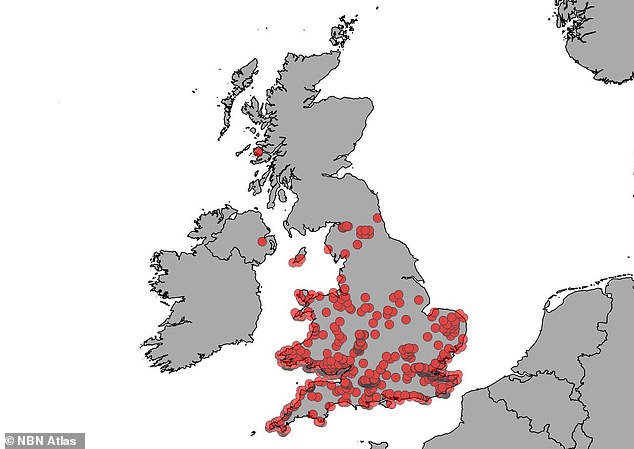 The pollinating species lives in open grasslands rich with wildflowers, like clovers, Bird’s-foot Trefoil, red bartsia and knapweeds, in the south of England and Wales. Pictured: Species distribution map of Brown-banded Carder bee from 1900 to present

Rob Skinner, Life on The Edge Project Manager at the South Devon AONB Unit said: ‘This is a fantastic and highly important find.

‘It shows that our Life on the Edge project is already delivering, boosting our knowledge of these special insects, we look forward to more finds as the project develops.’

The Life on the Edge nature recovery project hopes to enable the recovery of over 30 invertebrate species and 30 rare or declining plant species.

These include the Mediterranean Oil Beetle, Moon Spider, Goldilocks Aster and Autumn Squill.

It will do this by surveying these species, and using the results to inform farming practices and land management schemes that help support them.

The project is currently in its development stage, but will formally run from April 2024 until 2029.

Male wasps use sharp spines on their GENITALS to sting tree frogs and avoid being swallowed, new research has shown.

A study has found that increasingly hot and wet weather as a result of climate change is causing bees to develop asymmetrical wings.

The National Trust has revealed plans to create a wildflower grassland ‘savannah’ across 70 miles of Devon by 2030.

Wetlands could be key to saving our bumblebees as they provide essential environment for some species, study shows

Bringing back wild areas such as wetlands could be the best way of saving UK bumblebees, a study has found.

The Bumblebee Conservation Trust, Karlsruhe Institute of Technology and the University of Edinburgh used data from BeeWalk, in which more than 500 volunteers do monthly monitoring.

The team found wetlands and moorland were essential for species such as the moss and the brown-banded carder bee and the bilberry bumblebee. Areas with crops helped rare species like the large garden bumblebee.

Queens and males were linked with scrub, bracken and herbs, which may be good for nesting. Worker bees were found in hedges and lanes, suggesting these are good for providing food.