Santa should phase out coal as punishment in Christmas stockings: Environmental scientists claim ‘outdated and potentially harmful’ tradition for naughty children should be ended

Giving naughty children coal for Christmas could damage their mental health and the environment, it has been warned.

It is a Christmas tradition for children to get presents and oranges in their stockings, while those who have been badly behaved may end up with a lump of coal.

But the practice, adopted by retailers who sell pretend lumps of coal with messages like ‘you’ve been naughty’, has been criticised by leading paediatrician Dr Tamsin Holland Brown.

In the Christmas issue of The BMJ medical journal, she states: ‘The suggestion that children on the naughty list only deserve coal is outdated and potentially harmful to the environment and children’s health.’ 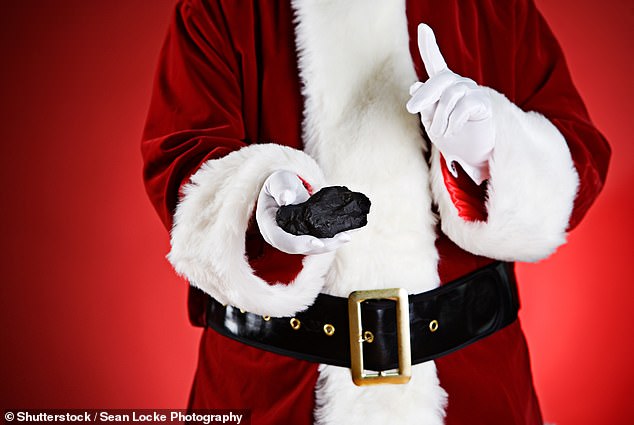 It is a Christmas tradition for children to get presents and oranges in their stockings, while those who have been badly behaved may end up with a lump of coal (stock image)

The tradition of coal being delivered to naughty children on Christmas Eve has many possible origins.

Perhaps the most famous legend is that of St Nicholas, or Sinterklaas, that was published in 1260.

In this story, a nobleman had three daughters ready to marry, but he had no dowry so no one would marry them.

So, Saint Nicholas secretly gave the family enough money so the daughters could start their lives with their new husbands.

He did this by placing the money in stockings that were drying by the fireplace.

When word spread about this miracle, everyone started hanging their stockings by the fire in hopes that the secret benefactor would visit them, too.

He did visit those houses on Christmas, but for those Saint Nicholas knew to be bad, he left a lump of coal instead of a bounty of gold.

The tradition of putting oranges or clementines into Christmas stockings is also alleged to have come from this story, with the round, orange fruit symbolising gold coins that were said to have originally been left as a gift in the stockings by St. Nick.

Quoting her daughters and co-authors, Lilac and Marigold, she says that because coal is a non-renewable fossil fuel, making climate change worse, when it is given to children, this means ‘the adults are being the naughty ones’.

Santa Claus, the character adapted from the story of 4th century bishop St Nicholas, who was noted for his generosity, has long been said to leave unruly children coal.

This may be because the material is close to hand when he comes down the chimney.

Some countries suggest the coal-giving is done by a malevolent character who comes with St Nicholas.

People in Austria and the Czech Republic, for example, attribute the gift of coal to the Krampus – a frightening creature with fangs, horns and fur who takes bad children back to the Underworld.

But the article led by Dr Holland Brown, from Cambridgeshire Community Services NHS Trust, says giving children coal will not improve their behaviour and ‘could have a negative impact on mental wellbeing’.

As the Covid-19 pandemic, ongoing war in Ukraine, cost of living crisis and climate change have already ramped up children’s worries, Dr Holland Brown and her daughters suggest fostering connections between the generations ‘might combat anxiety’ better than a lump of coal.

Calling for children’s self-worth to be improved, they quote Winnie the Pooh, describing Christmas as a ‘togethery sort of holiday’.

As the #coalforchristmas hashtag has become popular on social media, the article points out that coal’s impact on air quality can also be bad for children’s health.

The authors say: ‘It would be good for goodness’ sake if coal was left in the ground’. 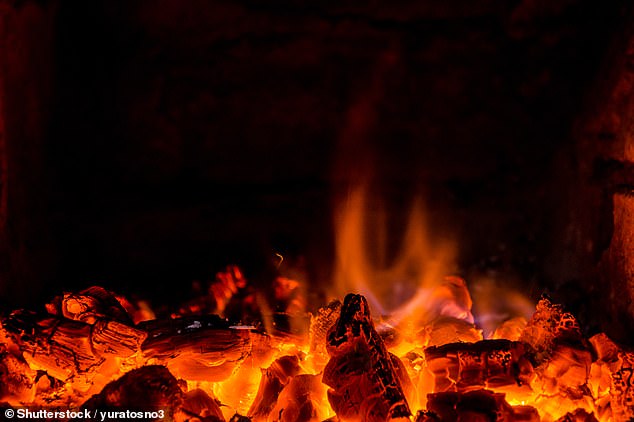 Quoting her daughters and co-authors, Lilac and Marigold, she says that because coal is a non-renewable fossil fuel, making climate change worse, when it is given to children, this means ‘the adults are being the naughty ones’ (stock image)

The article also makes the case for rewarding ‘naughtiness’, citing Greta Thunberg, the campaigner who inspired millions of children to go on strike from school to raise awareness of climate change.

As alternatives to coal, the authors suggest gifts which ‘support children’s wellbeing’, and connect them to nature and animals, such as a small pet like a stick insect.

To ease their anxiety over the climate, it is suggested youngsters could try ‘ecotherapy’ in the form of walks and bike rides in nature, and could eat plant-based foods.

Find out how Rudolph the Red Nosed Reindeer, The Grinch That Stole Christmas, and A Christmas Carol just MIGHT be possible, according to science.

Scientists have also revealed why we love Christmas films so much, and always come back to ones we’ve seen a hundred times before.

And reviewers have found that you might be able to cook your Christmas dinner in an air fryer, plus they are up to three times cheaper than an oven to run.

Scientists have calculated Santa’s carbon footprint as only 20,000 tonnes of CO2 emissions per year.

This takes into account the energy required for the elves to manufacture the gifts, heating the cabin and the sleigh journey.

That’s the equivalent of 0.5 per cent of the worst estimates for the carbon footprint of the FIFA World Cup in Qatar.

The team at Purdue University found that his journey around the world would release just 10g of carbon per child – the equivalent to one scoop of ice cream. 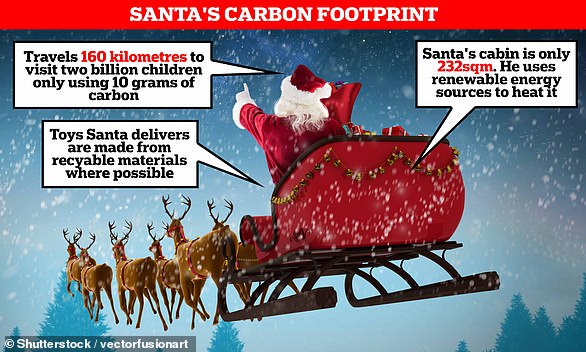 Research has shown that elves manufacturing gifts for Santa, the heating of Santa’s cabin and then his sleigh journey, only amounts to 20,000 tCo2e – equivalent to 0.5 per cent of the worst estimates for the carbon footprint of the FIFA World Cup in Qatar