The 2011 Fukushima nuclear disaster will cost hundreds of billions of dollars to clean up when all is said and done, but the environmental cost could be significantly higher, with nearby lakes contaminated for decades, according to a new study.

A group of researchers, led by those at the University of Tsukuba, have found that Lake Onuma on Mount Akagi could be contaminated with radioactive cesium-137 (137CS) for roughly 30 years after the disaster.

The researchers used the fractional diffusional method and determined that radioactivity concentration will happen for up to 10,000 days following the accident.

Just after the nuclear accident, the radioactivity concentration declined sharply, but that decline slows greatly in the months and years that follow.

Lake Onuma is a closed lake and has a limited amount of inflow and runoff water. 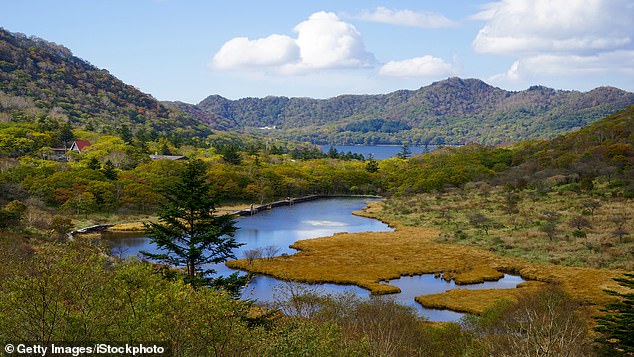 Japan’s Lake Onuma could be contaminated with radioactive cesium-137 (137CS) for roughly 30 years after the Fukushima disaster, a new study has found 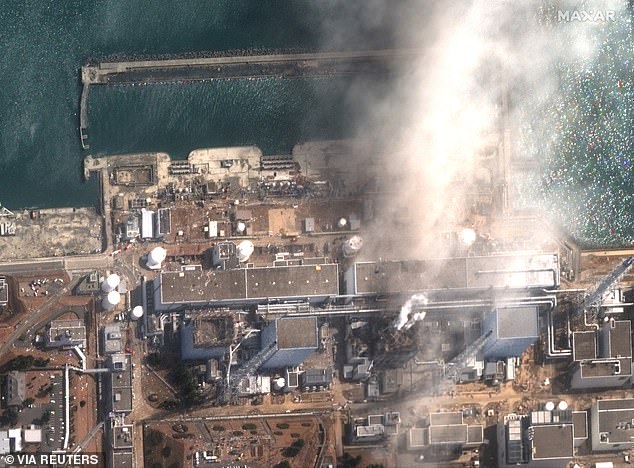 The catastrophic Fukushima nuclear disaster in 2011 caused an estimated 250,000 people to evacuate their homes 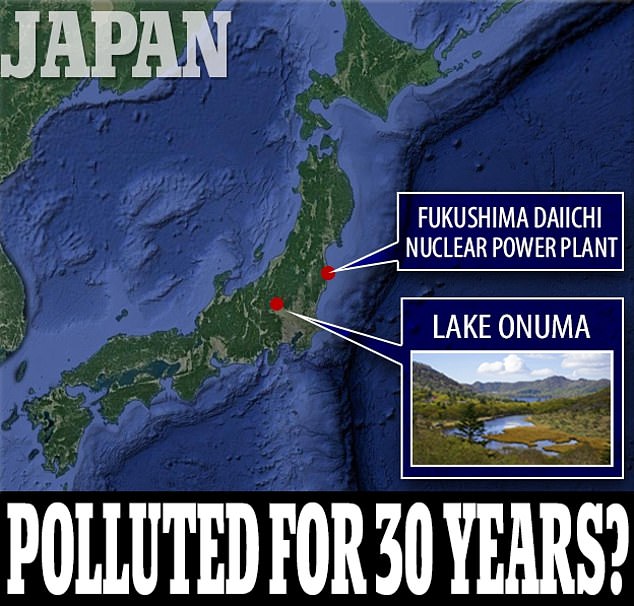 ‘Previous investigations have used the two-component decay function model, which is the sum of two exponential functions, to fit the measured 137Cs radioactivity concentration,’ one of the study’s co-authors, Professor Yuko Hatano, said in a statement.

‘Our work is instead based on the fractional diffusion model, a framework that captures the complex diffusion processes occurring in the lake water. These processes include convection-induced circulation, turbulent mixing, and absorption by plankton and other organisms.’

In 2016, the Japanese government raised its official projections for costs related to the nuclear disaster to $188 billion.

Some other estimates have suggested the final cost may approach $1 trillion and the recovery could last as long as 40 years.

According to the Environmental Protection Agency, Cesium-137 has a fairly long half-life, at approximately 30 years.

Exposure to the radioactive isotope can cause burns, radiation sickness and death, while also increasing the risk for cancer. 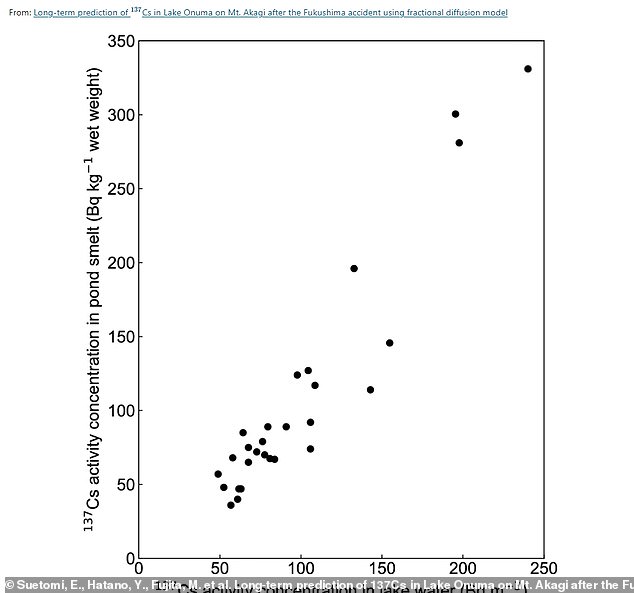 The experts used a model known as fractional diffusion to come up with a longer-term prediction for the 137Cs concentration in both the lake water and pond smelt, a typical fish that lives in the lake

The experts used a model known as fractional diffusion to come up with a longer-term prediction for the 137Cs concentration in both the lake water and pond smelt, a typical fish that lives in the lake.

The lake water and pond smelt were measured for 137CS concentration for 5.4 years after the accident, the researchers said.

‘This trend is consistent with the change in the 137Cs activity concentration of the lake water in Lake Onuma.’

Given the formula, the experts believe that radioactivity concentration will happen for up to 10,000 days following the accident. 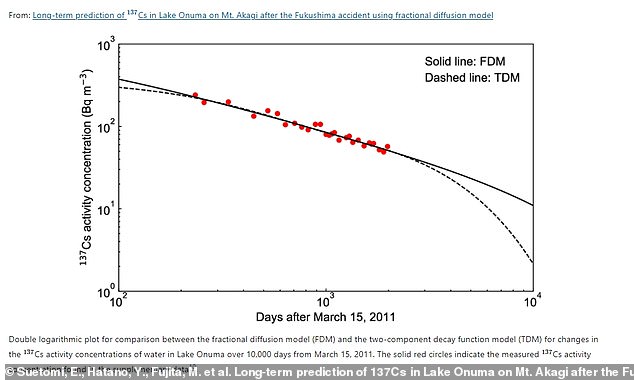 Given the formula, the experts believe that radioactivity concentration will happen for up to 10,000 days following the accident 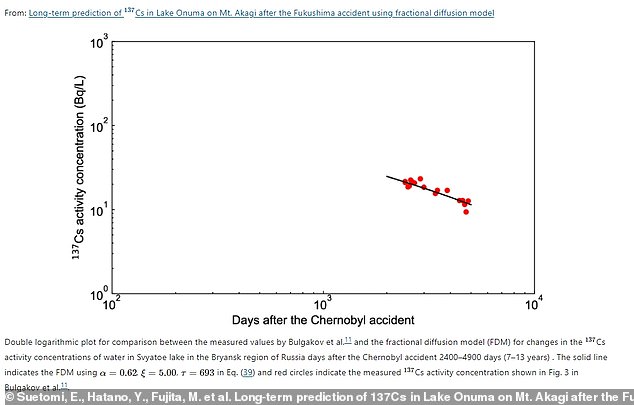 In contrast, water in Russia’s Svyatoe lake after the Chernobyl accident had 137CS concentration for a period of approximately seven to 13 years, or 2,400 to 4,900 days

In contrast, water in Russia’s Svyatoe lake after the Chernobyl accident had 137CS concentration for a period of approximately seven to 13 years, or 2,400 to 4,900 days 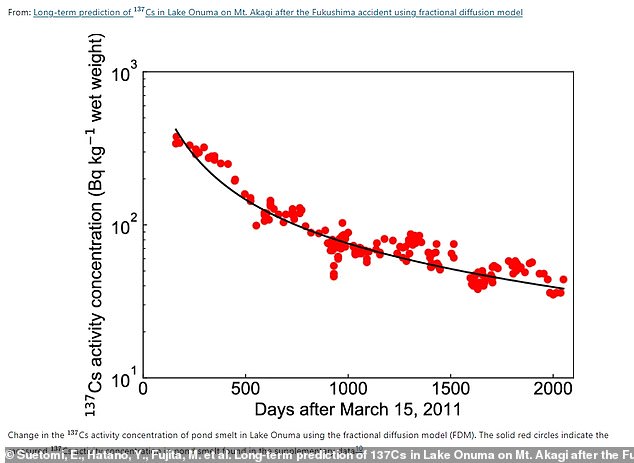 ‘Both models fit the radioactivity concentration of the lake water and pond smelt measured in the first few years after the accident,’ Professor Hatano added.

‘However, our results show that the decrease in radioactivity concentration is slowed down if the fractional diffusion model is used rather than the conventional two-component decay function model.’

The formula will allow researchers to better understand the radioactive contamination of nearby lakes that are closed and give residents a better idea of the living conditions near the lakes.

The study was published last month in Scientific Reports.

Last month, a separate group of researchers found that wildlife living in the area, specifically wild boar and rat snakes, are thriving and have not suffered from any significant adverse health effects.

This is likely due to the fact that cesium-134, one of the major radioactive materials released during the accident, saw its levels decrease in the area by almost 90 percent, as it has a relatively short half-life of just over 2 years.

In January 2020, a separate study found that more than 20 species, including wild boar, macaques and a raccoon dog were thriving in the ‘exclusion zone’ near the disabled Fukushima Daichii nuclear reactor.

In July, researchers discovered that the disaster had create a boar-pig hybrid, as both species in the area mated with one another.

Japan was devastated by the Fukushima disaster, which permanently shifted large parts of Honshu, the country’s main island, several feet to the east.

A steady stream of toxic, radioactive materials spewed into the atmosphere and forced thousands nearby to flee their homes.

In April, the Japanese government announced it will start releasing treated radioactive water from Fukushima into the Pacific Ocean in two years, a move that has angered China, South Korea, fishermen and residents of the island nation.

WHAT WAS JAPAN’S 2011 FUKUSHIMA NUCLEAR DISASTER?

Approaching a decade after the disaster, researchers are still struggling to clean up fuel in the waters of the wasting reactors.

Pictured is an aerial view of the reactors of the tsunami-stricken Fukushima Dai-ichi nuclear power plant stand in Okuma, Fukushima

It’s estimated that plant officials have only located 10 per cent of the waste fuel left behind after the nuclear meltdowns.

And the damaged plant is believed to be leaking small amounts of the radioactive waste into the Pacific Ocean, which could be travelling as far as the west coast of the United States.

Researchers are now pinning their hopes on remote-controlled swimming robots to locate the lost fuel in order to work out the safest way to remove it.

The government has lifted evacuation orders for much of the region affected by the meltdown, except for some no-go zones with high radiation levels.

Authorities are encouraging evacuees to return, but the population in the Fukushima prefecture has more than halved from some two million in the pre-disaster period.