Home » Science » February 2021 coldest in years thanks to La Nina

Earth had its coolest February in seven years due to La Niña in the tropical Pacific Ocean that dropped temperatures as much as 3.2F below the average in parts of the world, study reveals

Last month the Earth had its coldest February in seven years, thanks to the effect of La Niña.

During February, the average temperature in the contiguous US was 30.6 F, or 3.2°F below the 20th century average.

But it was a different story for the whole winter season: In the Northern Hemisphere, December 2020 to February 2021 ranked as the eight mildest winter in more than 140 years of record keeping. 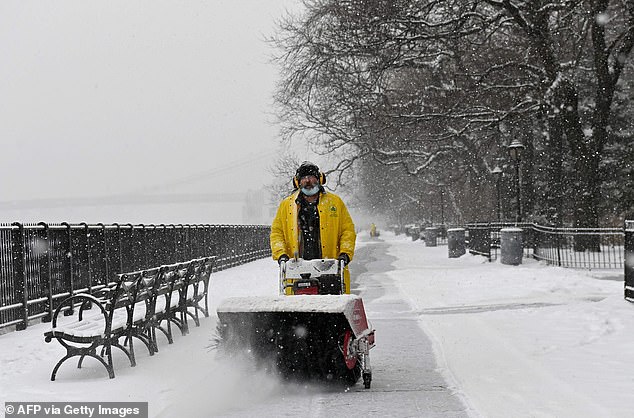 February 2021 was the planet’s coldest in seven years, due to the formation of La Niña in the tropical Pacific Ocean, according to the National Oceanic and Atmospheric Administration (NOAA). Pictured: A man uses a snow blower during a winter storm in New York

February 2021 was the planet’s coldest in seven years, due to the formation of La Niña in the tropical Pacific Ocean, according to the National Oceanic and Atmospheric Administration (NOAA).

The agency also pointed to ‘unusually brisk’ temperatures in most of North America, Scandinavia and northern Asia.

The US was particularly hard hit: The average temperature in the continental U.S. last month was 30.6 degrees F, or 3.2 degrees below the 20th century average. 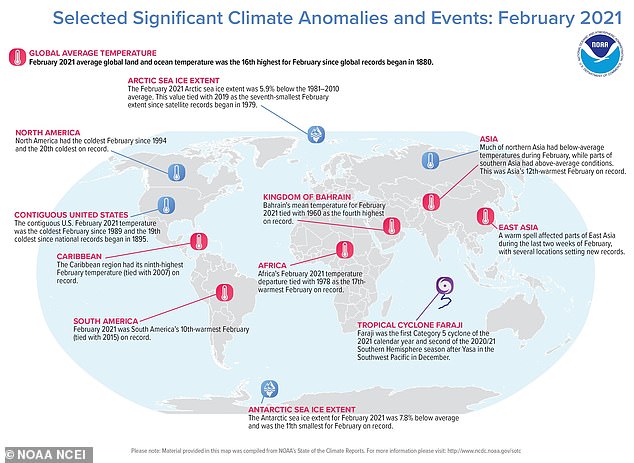 An annotated map with key climate events that occurred during February 2021. Despite the chilly month, the Northern Hemisphere as a whole experienced its 8th warmest winter (December 2020 through February 2021) in 142 years.

‘Below-average temperatures dominated much of the nation from the Northwest to the Great Lakes and south to the Gulf of Mexico,’ the NOAA said.

In Arkansas, Iowa, Kansas, Missouri, Nebraska and Oklahoma, February 2021 was in the top 10 coldest on record.

February also brought the coldest air to Texas since 1989, with many regions, including Austin and Waco, setting records for the longest streak of below-freezing temperatures.

A furious winter storm ravaged the state that resulted in 57 deaths and millions of people losing power, according to the Texas Department of State Health Services.

But winter overall was relatively mild and dry in the US, with an average of 33.6 degrees F, or 1.4 degrees above average.

Globally, December 2020 to February 2021 was the eighth warmest winter in 142 years of record-keeping, according to NOAA’s National Centers for Environmental Information.

Eastern Canada, much of Europe and southern and northeastern Asia experienced a remarkably mild February.

And South America and the Caribbean saw average temperatures in February that placed among the top 10 warmest for the month.

WHAT IS LA NINA?

A weather pattern that occurs in the Pacific Ocean every three to seven years.

It causes abnormally strong winds that make the ocean colder than it normally is.

This small change in temperature can trigger local weather patterns all over the world, including torrential rain, plunging temperatures and cyclones.

Rain clouds normally form over warm ocean water. La Niña blows all of this warm water to the western Pacific.

This means that places like Indonesia, Australia and southern Africa can get much more rain than usual.

It typically unfolds during the end of autumn or early winter.

For January and February 2021, the global land and ocean surface temperature logged in at 1.30 degrees F above the 20th-century average, making it the 11th warmest year to date on record.

The average global land and ocean surface temperature last month was 1.17 degrees F higher than the average for the 20th century

The National Oceanic and Atmospheric Administration (NOAA) sent out a warning in August that La Niña conditions were present in the Pacific Ocean and were set to make their way to the US.

This weather phenomenon is formed by a build-up of cooler water that lowers surface temperatures.

NOAA observed below-average temperatures stretching across the central and eastern regions of the Pacific Ocean in August, along with atmospheric circulation anomalies hanging over the surface – a sure sign La Niña has arrived.