North Atlantic right whales have had their ‘most encouraging calving season in years’ with more than 14 new calves sighted off the Florida coast by environmentalists.

FWC Fish and Wildlife Research Institute, who published a bulletin on population statistics, says 65 North Atlantic right whales have been spotted so far this year off the coast of Florida and North Carolina.

Despite the population boost, experts from advocacy group Defenders of Wildlife, warn that North Atlantic right whales are being killed through commercial fishing nets and speeding vessels faster than they can reproduce. 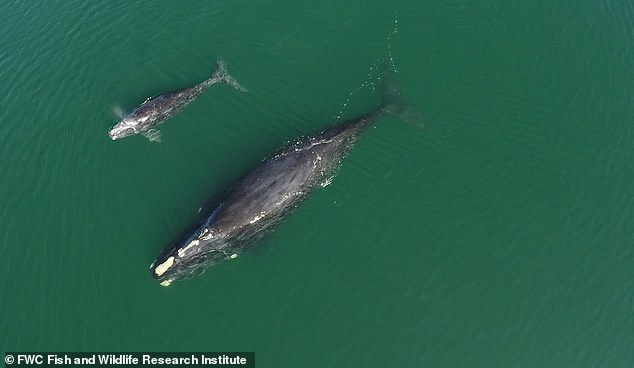 North Atlantic right whales are critically endangered, with an estimated 356 alive as of the end of 2019 – of which fewer than 70 adult females of calf-bearing-age are left.

State authorities in Florida say the three first time mothers were Champagne, 12, Infinity, 19 and an as yet unnamed whale aged 14.

Adding those to the 11 other recorded newborns has led to Defenders of Wildlife describing it as the ‘most encouraging calving season in years’.

However, group senior attorney, Jane Davenport, said while the births are an encouraging sign, humans are still ‘killing the creatures faster than they can reproduce’.

She said continuing threats from entanglements in fishing ropes and vessel strikes underscore the need to redouble conservation efforts.

Within the first few weeks of January a severely entangled right whale was spotted off the coast of Georgia dragging rope through the heart of calving grounds.

‘Right whales face a daily gauntlet of fishing ropes and speeding vessels, which together have caused the deaths of more than 200 right whales in the last decade alone, said Davenport.

Since 2017 there have been 32 confirmed deaths of right whales in US and Canadian waters – and 14 serious injuries – a period described by Defenders of Wildlife as an ongoing ‘unusual mortality event’.

In 2020 alone, two of the season’s 10 right whale calves were killed by vessel strikes.

‘Unless we move quickly to abate these threats, we’re running out of time to save the species from extinction,’ she said. 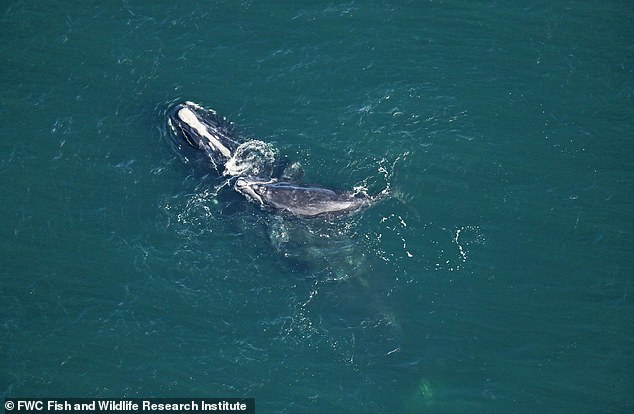 North Atlantic right whales are critically endangered, with an estimated 356 alive as of the end of 2019 – of which fewer than 70 adult females of calf-bearing-age are left

There have been 65 sightings of the right whales around the Florida coast as part of the winter 2021 season – aside from the newborns, they range in age from one to 47.

According to FWC, who published a bulletin into the latest population figures: ‘Right whales are low profile and can be difficult to see while boating.

‘They spend a lot of time at or near the surface while in the calving grounds, particularly mother-calf pairs.’

This is a critical and vulnerable time for right whale mothers to bond with their calves – Federal law requires that vessels, kayaks, SUPs, jet skis and all other watercraft remain at least 500 yards from right whales.

WHAT ARE NORTH ATLANTIC RIGHT WHALES?

North Atlantic right whales are a species of marine mammal which can measure up to 60 feet long (20 metres).

They tend to calve off the shores of Georgia and Florida in the Atlantic Ocean before migrating further north.

Numbers have plummeted in recent years due to premature deaths as a result of getting trapped in fishing lines and unfortunate encounters with ships.

A primnciple food source for the whales is phytoplankton.

This phytoplankton has been damaged in recent times as global warming has increased the water temperature of the Gulf of Maine.

It is currently critically endangered and there are believed to be only 365 animals in the world.,

Of these, only 70 are reproductive age females, and at the current rate they are being killed (10 last year) the species could be functionally extinct in 20 years.

The animals has a gestation period of over a year and the calves rely on their mother for food for a further 9-12 months.