From floppy disks to cassette tapes: MailOnline reveals the obsolete technologies that will baffle modern generations – as the fax machine reaches the end of its road

After a history stretching back more than 150 years, the beloved fax machine may finally become a thing of the past.

Ofcom, the UK’s communications regulator, has set out plans to kill off fax machines for good by no longer requiring telecoms companies to use them.

It said the move ‘reflects that use of fax services in the UK is now very limited’ due to a range of free and low-cost alternatives available, such as email and Google Docs.

Here, MailOnline reveals the obsolete technologies that the fax machine will join in the great electronic graveyard, from the floppy disk to the pager and the VHS cassette. 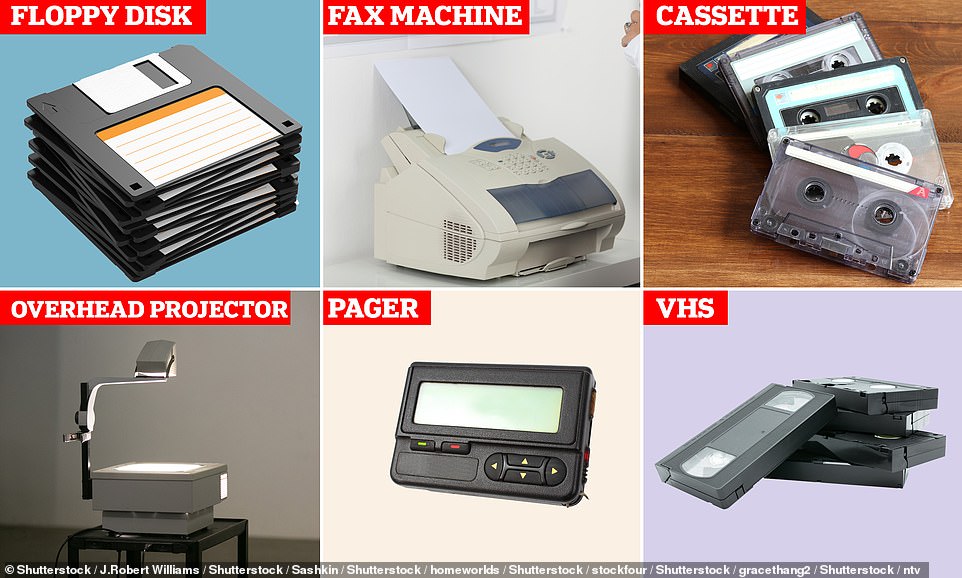 Here, MailOnline reveals the obsolete technologies that will baffle modern generations, from the floppy disk to the overhead projector, a mainstay of 1990s classrooms

BRIEF HISTORY OF THE FAX MACHINE

The first recognizable version of what we consider the telephone fax was invented in 1964 by the Xerox company in New York, but the technology that led to that advancement was created much earlier.

Baine’s invention wasn’t widely tested, although it was the catalyst for several improved versions. Those include one by Frederick Blakewell in 1847 and another by Giovanni Caselli, who made the first commercial fax system in 1863.

Ofcom revealed on Tuesday that is looking to scrap the requirement to providers to offer fax machines, consigning the popular technology to the e-waste pile.

The iconic communications device – formally known as a facsimile machine – was once a regular feature in offices and even homes.

Fax machines work by allowing users to send an exact copy (a ‘facsimile’) of a page of text or images to the recipient, using a telephone line to do so.

They were popular for big-money transactions with tight deadlines, such as house sales or football transfers, as they enabled contracts to be exchanged quickly.

The technology behind the fax machine was first patented in 1843, more than three decades before Scottish inventor Alexander Bell did so with the telephone.

But the rise of digital messaging through phones and laptops made the fax machine less useful to business and individuals, so its impressive run may finally be coming to an end.

After a 2018 survey found 9,000 fax machines were still in use within the NHS, then health secretary Matt Hancock had promised to phase out the ‘archaic machines’.

Now, Ofcom has proposed rule changes that would mean telco firms BT and KCOM would no longer be required to provide fax services, potentially withdrawing the framework that allows them to operate in homes and offices.

Ofcom’s proposed rule change comes ahead of the old telephone network – which has become harder and more expensive to maintain – being retired by the end of 2025.

The whole infrastructure will instead be digitised, meaning certain devices that connect to the landline, including fax machines, will no longer function.

Ofcom is inviting comments on its proposed rule change by December 1 and expects to publish a statement early next year.

The floppy disk, invented and made by IBM in 1967, was once the preferred format for storing files and transferring them between computers – but you’d be lucky to find one being used today.

A floppy disk is a flexible circle of plastic – the ‘floppy’ part – that’s coated with a magnetic material and enclosed in a hard square plastic case. Data is arranged on the surface of the magnetic disk in concentric tracks. 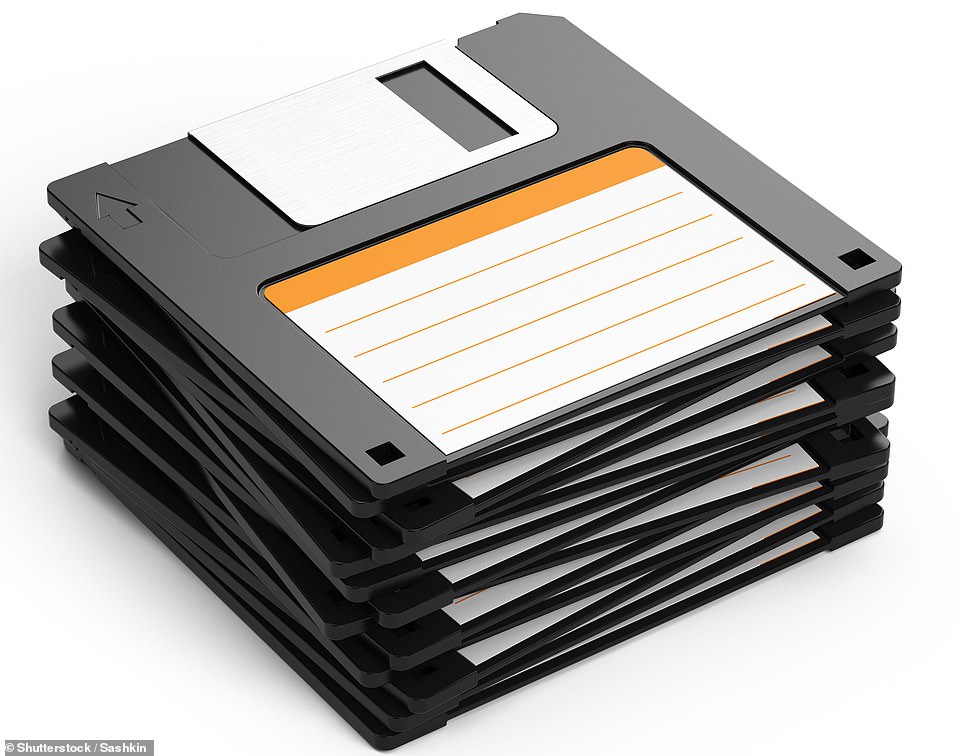 The floppy disk, invented and made by IBM in 1967, was once the preferred format for storing files and transferring them between computers

In 2018, researchers at YouGov showed 2,011 children photographs of different technologies and asked them to name each one. If they thought they knew what it was, they were asked to write down its name.

The results showed 67 per cent either did not know what a floppy disk is or incorrectly identified it.

Under 18s found pagers and Ceefax/Teletext hardest to identify], with 86 per cent of children baffled as to what they could be.

When inserted into a computer’s floppy disk drive, a metal slide door is opened to expose the inner magnetic circle to read the data.

Floppy disks were eventually made obsolete by CDs, USBs and flash drives, as a smaller and more portable way to share files from computer to computer, with more storage capacity too.

More than five billion were sold per year worldwide at its peak in the mid-1990s, but now, the little plastic squares are a fast-fading memory for some, and unrecognizable for others.

A memorable comic strip from 2014 showed how far the floppy disk had slipped out of public consciousness. In the comic, a child sees a floppy disk and says: ‘Wow, cool! You made a 3D model of the save icon!’.

Before Spotify on smartphones, iPods and MP3 players, popping a cassette into our Sony Walkman was the dominant method of listening to music on the go.

Much like a floppy disk, a cassette is a rectangular plastic shell that surrounds two rotating spools with tape wrapped around them. 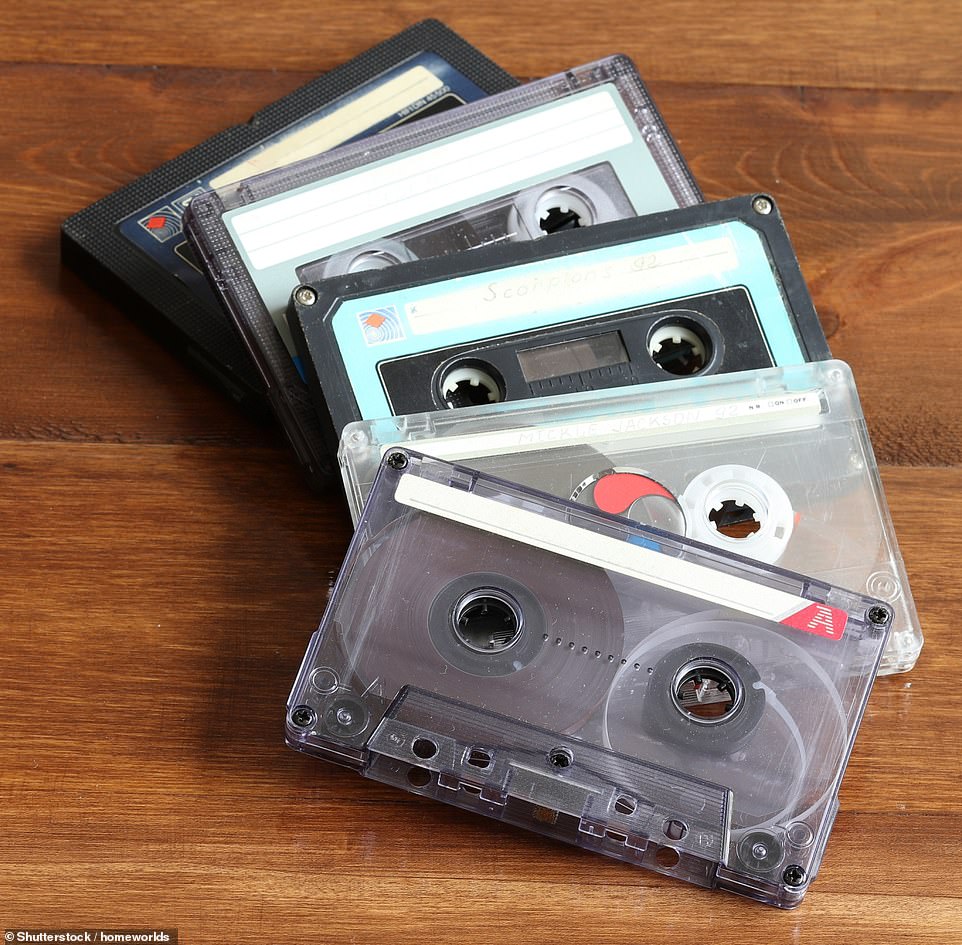 A cassette is a rectangular plastic shell that surrounds two rotating spools with magnetic tape wrapped around them. They’ve largely been replaced by CDs and vinyl as a means of listening to music – although they are making something of a comeback

The tape has a magnetic coating that is used to encode an audio signal. When slotted into a cassette player, the tape runs past an electromagnetic head on the cassette player for audio playback.

Cassette tapes were initially relatively poor quality and showed low fidelity, and as a result, usage was mainly confined to voice recording and dictation.

But gradual improvements to the tape, materials and hardware led to high fidelity cassettes and players which could be used for music, heralding an era of listening to tunes on the move.

After booming in the 1970s and 1980s, the format started to decline in popularity though the 1990s as music buyers opted for CDs instead. 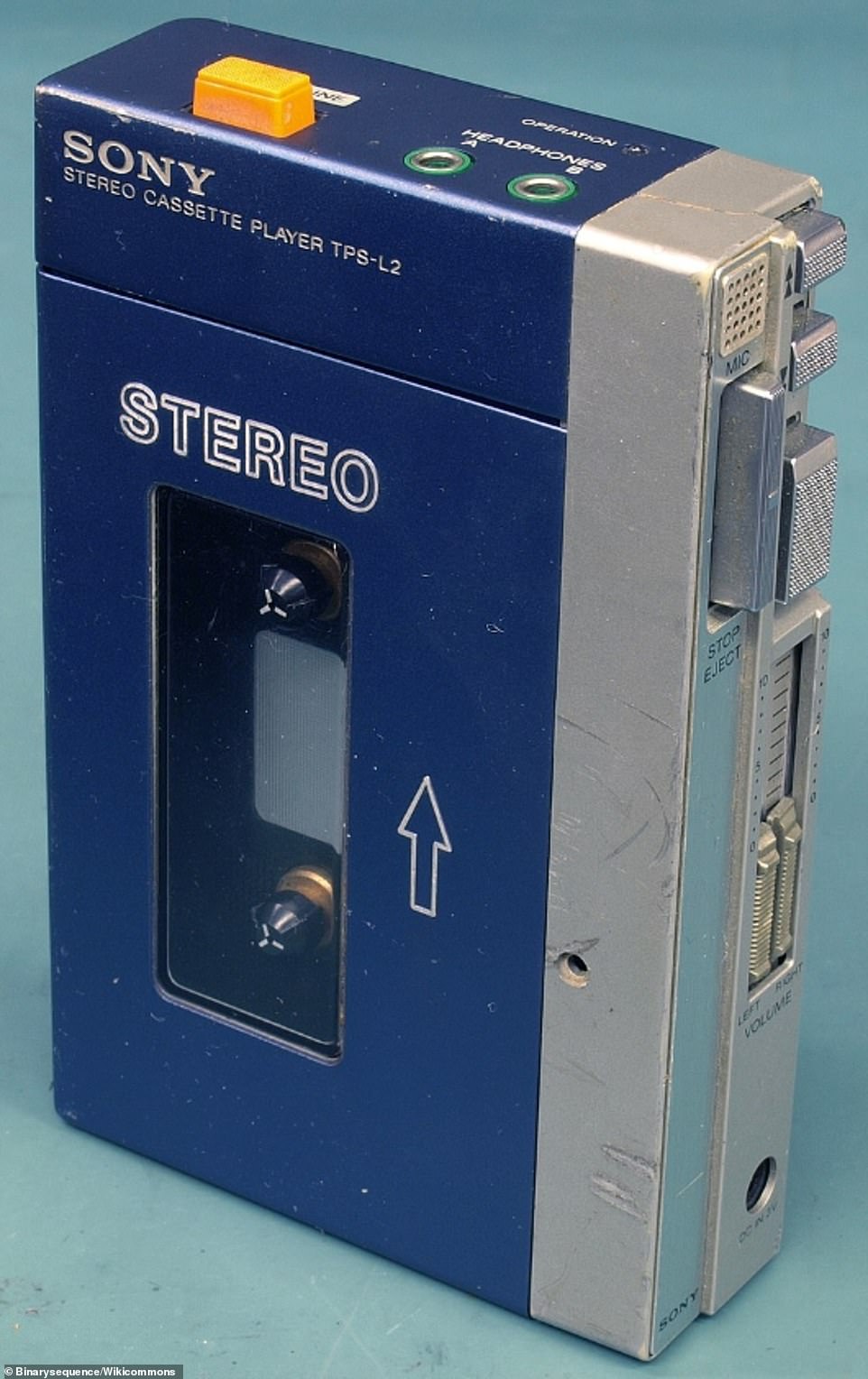 However, the humble cassette does seem to be making something of a comeback for hipster music fans. To cater for a love of retro, record labels are releasing cassettes as an alternative to vinyl and CDs.

Surely one of the most beloved products of the 1990s was the VHS, the dominant format for watching films and TV shows before the existence of DVDs, Blu-ray and streaming.

VHS, short for video home system, used magnetic tape just like the audio cassette, although the VHS cassette was much bigger and chunkier. 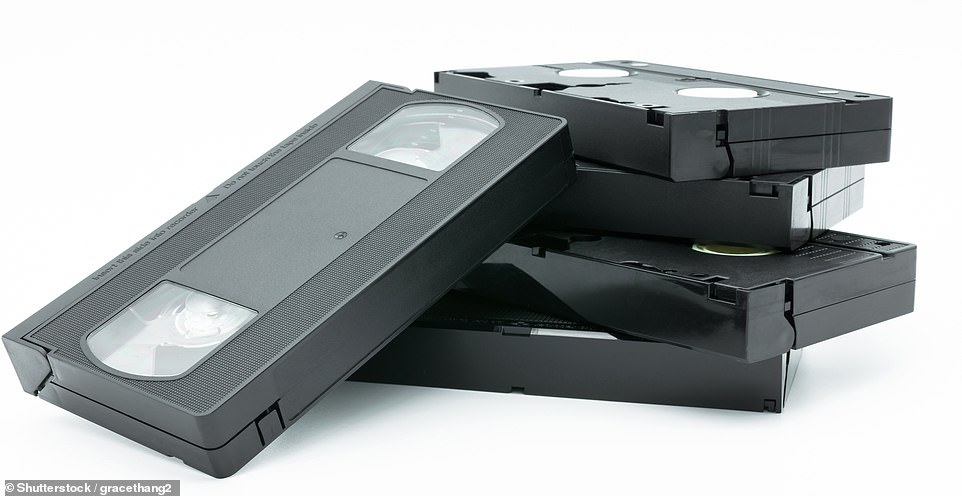 VHS, short for video home system, was the dominant format for watching films and TV shows before the existence of DVDs, Blu-ray and streaming

Sony first launched its Betamax products in 1975 as a household, magnetic video format for consumers to record analogue television shows.

Popularity of Betamax tapes peaked in 1984 when some 50 million cassettes were shipped, according to Sony.

However, the format, initially supported by Toshiba and other electronics makers, is remembered as the loser of the tense corporate battle in the 1970s and 1980s over setting the de facto household video standard.

The battle was won heartily by the VHS format, made by another Japanese electronics maker called JVC.

VHS gave way to digital formats, such as DVDs, that have largely been replaced by online streaming.

VHS was developed by Japanese company JVC, and after its consumer introduction in September 1976, VHS sparked a home entertainment revolution.

Although its primary rival was Sony’s Betamax, other companies such as Philips, MCA and RCA also produced tape and disc systems that failed to capture the market.

VHS eventually won the format war – although it eventually lost out to digital discs, which has since been largely superseded by video streaming platforms.

Today we have streaming on-demand platforms like BBC iPlayer and All 4 to ensure we can watch programmes even when we missed its live transmission.

But half a century ago, in the absence of this luxury, inserting a blank VHS to a videocassette recorder (VCR) really was the only way we could see films and TV whenever we wanted.

A stalwart of classrooms in the 1990s was the clunky but loveable overhead projector, which uses light to project an enlarged image onto a blank screen.

Light from the base of the device is used to illuminate a clear plastic projector sheet with images or text written on it in pen ink – such as a maths equation or a complicated graph.

Hanging over the base is an adjustable arm containing mirrors, which reflect the light coming through the image and out through a lens. 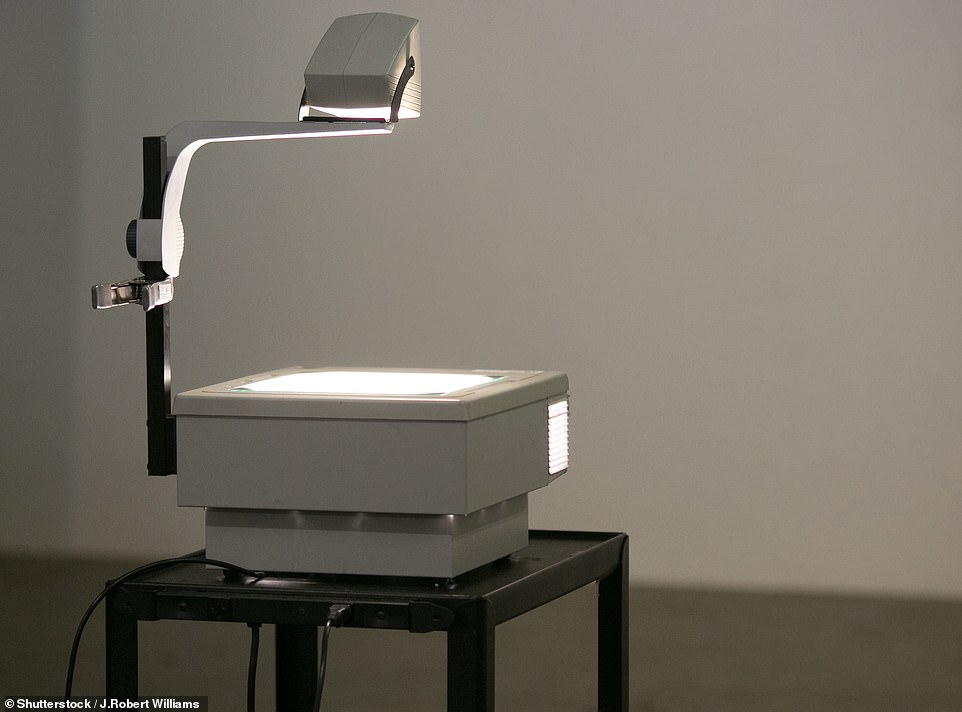 The overhead projector (pictured), which used simple light reflection to project text and images, was often used in schools and businesses before digital projection

When the light in the base is turned on, it causes the ink on the projector sheet to be reflected by the mirror so that it can be displayed on the blank surface, usually the teacher’s white board.

Brits of a certain age will remember the tedium of teachers laying sheet after sheet onto the overhead projector during a lesson, alleviated only by knocking the long arm to make the projection move about.

In the 2000s and 2010s, overhead projectors were largely phased out across British classrooms, replaced by power point presentations and massive touchscreen white boards.

It’s difficult to imagine an era where WhatsApp wasn’t the go-to for sending and receiving text and voice messages, although the pager was very much a pioneer in this regard. 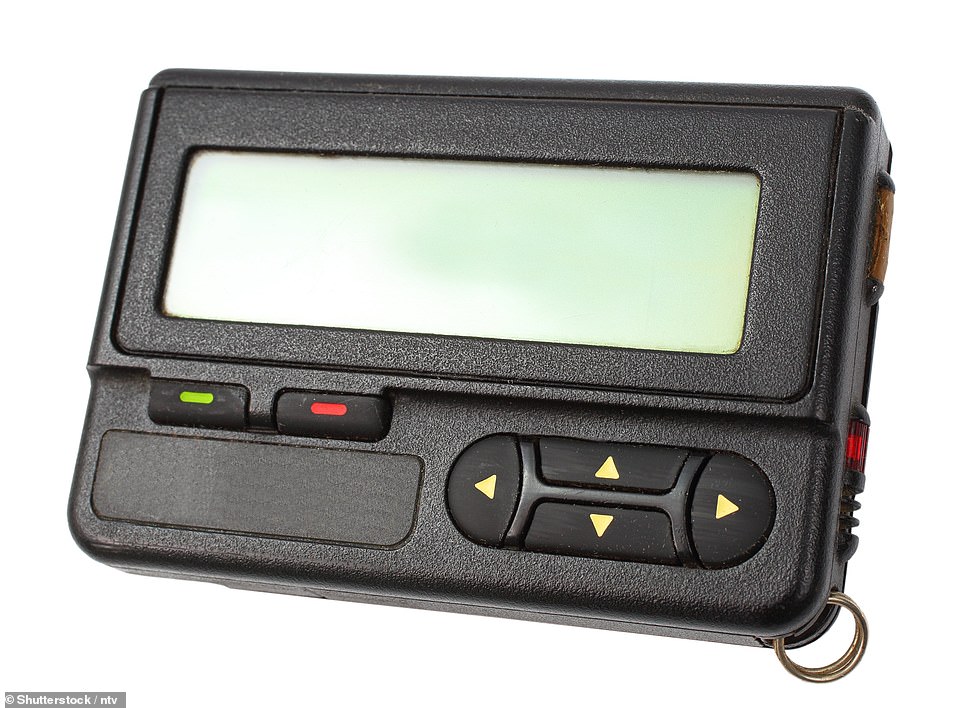 Also known as a buzzer or beeper, the wireless telecommunications device beeps or vibrates when receiving transmissions from others.

A screen on the pager shows alphanumeric messages, such as a telephone number for the person carrying the device to call.

Pagers made appearances in classic films of the 1990s and 2000s such as American Beauty, Cast Away and Bruce Almighty.

THOSE WERE THE DAYS! NOSTALGIC SNAPS REVEAL HOW PEOPLE ENTERTAINED THEMSELVES BEFORE NETFLIX WAS INVENTED – FROM VIDEO TAPES TO CAR CASSETTE PLAYERS

Between video streaming services and social media, there are countless ways for today’s teenagers to pass the time.

But these social media users remember what it was like before Netflix and Amazon Prime Video, when box set videos, mix tapes and car cassette players were all the rage.

During the Covid pandemic, Reddit users from around the world shared images of the things that kept them entertained as children and teenagers.

One person shared the welcome screen for now defunct Microsoft Windows XP, as they reflected on the years spent sharing a computer with their family.

Another sparked memories of watching documentaries at school with a photo of a television and video player on wheels.

Another individual confessed they spent much of their childhood playing Space Cadet on their computer.