Giant SHARK — possibly a megalodon — sunk its teeth into a baleen whale 15 million years ago, bite marks on a flipper bone reveal

A baleen whale was lunch for a giant shark — possibly a megalodon — some 12–15 million years ago, bite marks on a fossilised flipper bone (or ‘radius’) have revealed.

Perhaps fortunately for the whale, it was most likely dead at the time and floating at the sea surface when the shark scavenged it, Calvert Marine Museum experts said.

Analysis of the damage inflicted to the radius suggests that one shark repeatedly sunk its teeth into the corpse, thrashing its head back and forth to tear off each bite.

As is standard for so-called ‘trace fossils’ — evidence of animal behaviour — the bite marks were given their own species name, that of ‘Linichnus bromleyi’.

The 11-inch-long bone was found at Parkers Creek, in Maryland’s Calvert County, by local fossil collector William Douglass, and donated to the Calvert Marine Museum.

Identifying the exact shark species that left the bite marks is difficult — but suspects include a young Otodus megalodon, the largest shark ever known to have lived.

Megalodon was an extinct mackerel shark thought capable of growing up to 65 feet in length and biting through flesh and bones with a force of 182,200 newtons. 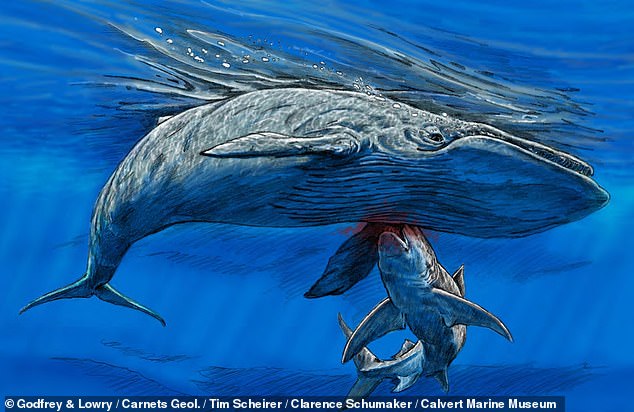 A baleen whale was lunch for a giant shark — possibly a megalodon — some 12–15 million years ago, bite marks on a fossilised flipper bone, or ‘radius’, have revealed. Pictured: an artist’s impression of the shark feeding on the larger whale

During the Miocene — the geological period spanning roughly 23–5 million years ago, and from which the fossil whale bone dates — Maryland’s Chesapeake area was intermittently flooded by water from the Atlantic.

In the period from 20–9 million years ago, fossil-rich sediments were deposited in this sea, forming today the rocks that outcrop at Parkers Creek in the Calvert Cliffs.

Today, the cliffs yield assorted fossils — including not only the direct remains of ancient creatures, but also so-called trace fossils like burrows and fossilised faeces (or ‘coprolites’).

‘This bone is very unusual because it preserves so much evidence of head-thrashing behaviour of an extinct shark feeding on an extinct whale’, Calvert Marine Museum’s curator of palaeontology and paper author Stephen Godfrey said in a press release.

Multiple gouge marks were found on both sides of the whale’s flipper bone, indicating that the shark took at least three bites of the large marine mammal.

‘The shark would have clenched down on the flipper firmly and then shaken its head vigorously in an attempt to cut through the bone (unsuccessfully) or to simply remove flesh. After it had removed some, it re-bit the flipper to remove more.’

Based on the radius bone’s flattened and curved shape, the researchers believe that the fossil originally belonged to a filter-feeding baleen whale — most likely Diorocetus hiatus, an extinct species known to have lived in the area.

‘When a whale dies, it inverts and floats at the surface of the water due to the build-up of abdominal gases from decomposition,’ Dr Godfrey told Live Science.

Scavenging sharks often feed at the ocean’s surface — and the whale’s flipper would have been an easy target for the hungry creature, the team explained.

Alongside Megalodon, several other sharks could have been behind the posthumous attack, Dr Godfrey said, including Alopias grandis or palatasi, Galeocerdo aduncus, Hemipristis serra, Physogaleus contortus and Sphyrna laevissima.

Unfortunately, the bite marks do not indicate clearly enough whether or not the shark had serrated teeth — which could have been used to narrow down the culprits.

Were the marks made by a shark with non-serrated teeth, Dr Godfrey told Live Science, then the ‘most likely candidate would be Carcharodon hastalis — the ancestor of the living great white shark.’

The full findings of the study were published in the journal Carnets Geol. 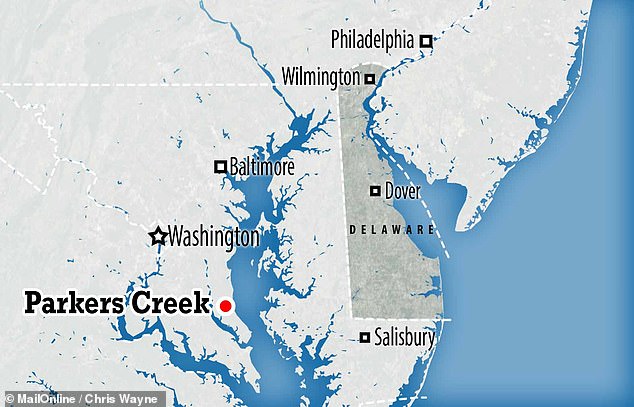 The 11-inch-long bone was found at Parkers Creek, in Maryland’s Calvert County, by local fossil collector William Douglass, and donated to the Calvert Marine Museum 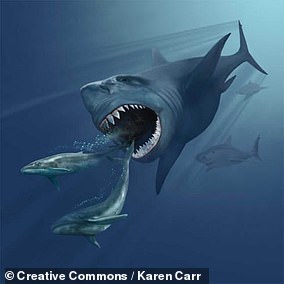 The megalodon, meaning big-tooth, lived between 15.9 and 2.6 million years ago.

O. megalodon is considered to be one of the largest and most powerful predators in vertebrate history and fossil remains suggest it grew up to 65ft (19 metres) long.

It’s thought the monster looked like a stockier version of today’s much feared great white shark and weighed up to 100 tons.

Megalodon is known from fossilized vertebrae and teeth, which are triangular and measure almost eight inches (20cm) in diagonal length.

The Megalodon’s colossal mouth would have produced a but force of 10.8 to 18.2 tons.

The ancient shark has been described as a super predator, because it could swim at high speeds and kill a wide variety of prey such as sea turtles and whales, quickly in its strong jaws.