Giant hippos weighing around three tonnes roamed Britain one million years ago, according to a new study.

Researchers from the University of Leicester have discovered a tooth in a cave in Somerset, which they believe belonged to a giant species of hippo called Hippopotamus antiquus, and dates back around one million years.

Hippopotamus antiquus was much larger than the modern African hippo, weighing in at a whopping three tonnes, the researchers say.

While previous research has indicated that these creatures roamed the UK 750,000 years ago, the new tooth suggests the animal lived here much earlier than previously thought. 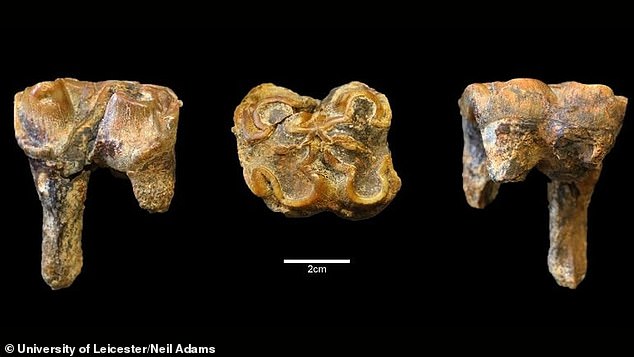 Researchers from the University of Leicester have discovered a tooth in a cave in Somerset, which they believe belonged to a giant hippo called Hippopotamus antiquus, and dates back around one million years 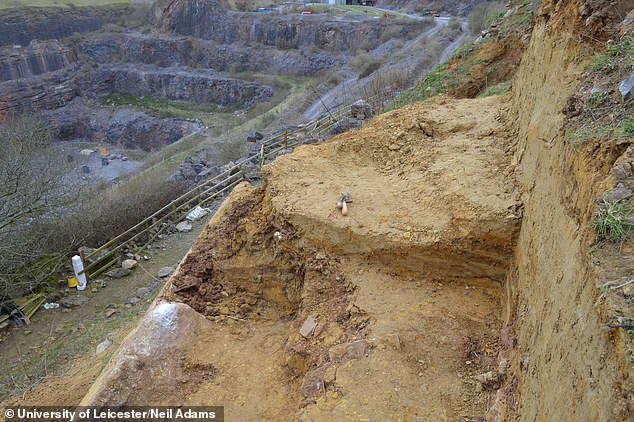 In the study, researchers from the University of Leicester excavated Westbury Cave in Somerset, where they uncovered the hippo tooth

Hippopotamus antiquus was a species of hippo that ranged across Europe around 1.8 million years ago.

It was much larger than the modern African hippo, weighing around three tonnes, and was even more reliant on aquatic habitats than its living relative.

Previous research has uncovered fossils in sites across Europe, including Germany, France and the Netherlands.

In the study, researchers from the University of Leicester excavated Westbury Cave in Somerset, where they uncovered the hippo tooth.

Dating revealed that the fossil is over one million years old – significantly older than the previous hippo fossils found in the UK, which date back to 750,000 years ago.

Dr Neil Adams, who led the study, said: ‘It was very exciting to come across a hippo tooth during our recent excavations at Westbury Cave.

‘It is not only the first record of hippo from the site, but also the first known hippo fossil from any site in Britain older than 750,000 years.

‘Erosion caused by the coming and going of ice sheets, as well as the gradual uplift of the land, has removed large parts of the deposits of this age in Britain.

‘Our comparisons with sites across Europe show that Westbury Cave is an important exception and the new hippo dates to a previously unrecognised warm period in the British fossil record.’

Surprisingly little is known about the fauna and flora living in Britain 1.8 – 0.8 million years ago – a key period when early humans began to occupy Europe.

However, the researchers hope the new findings will help to fill this gap, with the toothe indicating this interval was warmer enough to allow hippos to migrate from the Mediterranean to southern England.

Professor Danielle Schreve, co-author of the study, said: ‘Hippos are not only fabulous animals to find but they also reveal evidence about past climates.

‘Many megafaunal species (those over a tonne in weight) are quite broadly tolerant of temperature fluctuations but in contrast, we know modern hippos cannot cope with seasonally frozen water bodies.

Previous research has uncovered hippo fossils from this age in sites across Europe, including Germany, France and the Netherlands.

Why are Hippos so dangerous? 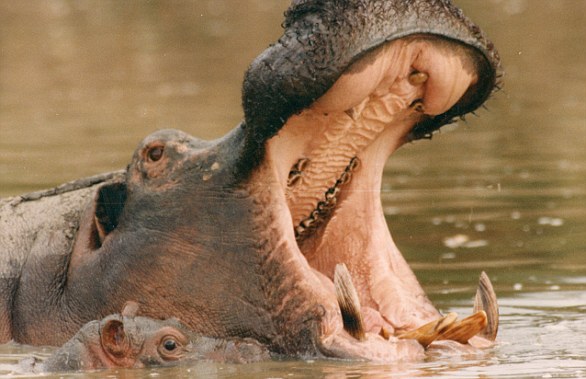 The world’s third-largest land mammal is also on of the most dangerous.

Despite their primarily vegetarian diet, the hippopotamus is extremely aggressive and territorial.

The combination of sheer size,sharp teeth, and mobility both in and out of water make for a killer animal.

They are agile and aggresive and kill large animal and sometimes humans.

Over the years hippos have been spotted eating impala, kudu, eland, wildebeest and buffalo.

In Niger in 2014, 13 people drowned when hippos overturned their boat.