Region in the Bermuda Tringle is a destination for green turtles during their ‘lost years’ after hatching on Florida beaches, study reveals

But where the little amphibians go after making the perilous journey to the Atlantic has long been a mystery.

To solve it, researchers outfitted baby turtles with solar-powered tracking devices and set them loose in the Gulf Stream.

Rather than just drifting with the current, it turns out most of the turtles spent their ‘lost years’ in the Sargasso Sea, an ocean gyre in the North Atlantic.

The findings will help environmentalists protect this endangered species, especially during their vulnerable early years. 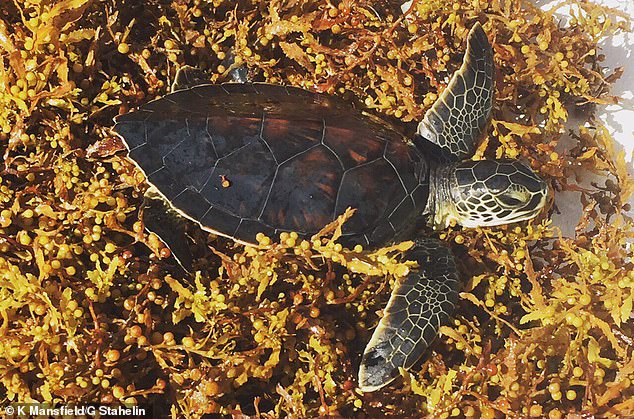 One of the largest species of sea turtles, green turtles are found mainly in tropical and subtropical waters.

Their name comes from the greenish hue of their fat and cartilage, not the color of their shells.

The International Union for Conservation of Nature has classified the green turtle as endangered.

Hunting, over-harvesting of their eggs, loss of nesting sites and getting caught in fishing gear have decimated their numbers, with an estimated 100,000 killed every year. 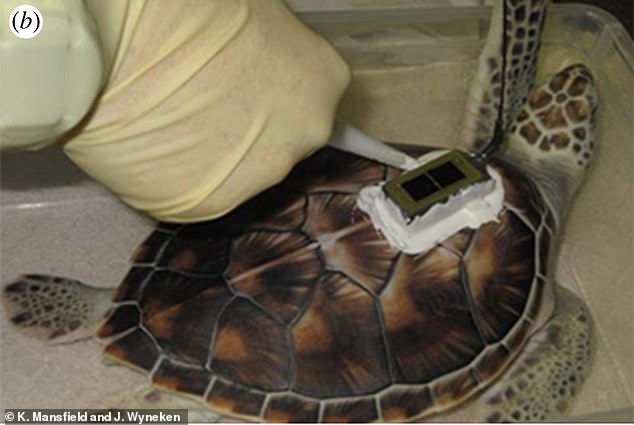 To find out where green turtles spent their ‘lost years,’ researchers outfitted 21 turtles with solar-powered trackers. The devices didn’t harm the turtles or inhibit their behavior, and were designed to fall off after a few months 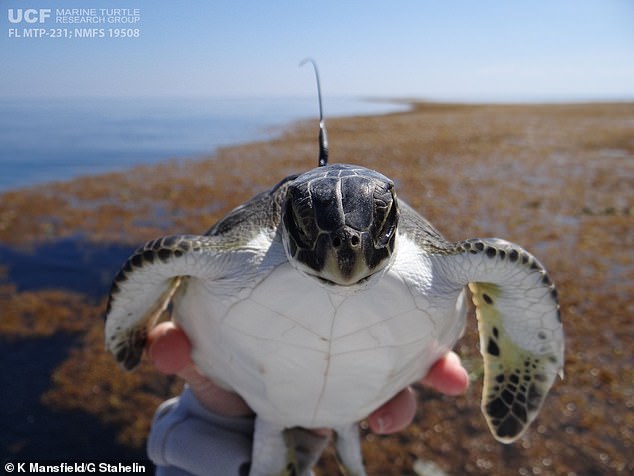 The young turtles were released into the Gulf Stream about 10 miles offshore from the beach where they hatched. The longest tracker kept working for 152 days

Like other sea turtles, young green turtles will hatch on the sand and then crawl to the ocean and migrate a vast distance to feeding grounds.

The study, published this week in the journal Proceedings of the Royal Society B, marks the first time marine biologists have tracked green turtles during the period between hatching and when they return to coastal waters years later.

Previously, it was thought the young turtles just passively rode sea currents in their early years.

To get a clearer answer, researchers at the University of Central Florida attached inch-long solar-powered trackers to the shells of 21 baby green sea turtles.

The tracking devices didn’t harm the turtles or inhibit their behavior, and were designed to fall off after a few months. 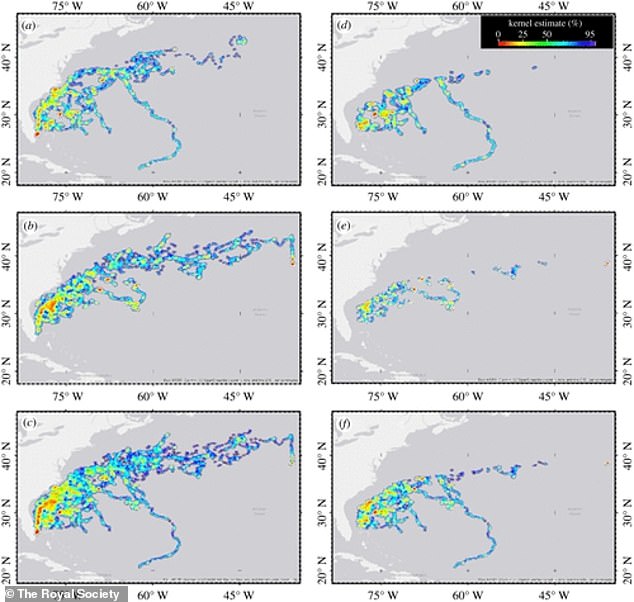 The trackers indicated most of the turtles rode the Gulf Stream currents for a bit, but then dropped out to swim in the Sargasso Sea. The warmer colors above indicate a high density of turtles in the Sargasso

Their tracking data indicated that after entering the Atlantic off the coast of Florida near Boca Raton, a majority of turtles made their way to the Sargasso Sea to spend their adolescence.

Earlier research had indicated loggerhead turtles made a similar journey to the Sargasso.

Unlike other seas, the Sargasso doesn’t touch land—it’s bounded by four currents that form an ocean gyre.

In popular culture, the Sargasso is viewed as a mythic quagmire where pirate ships and other vessels become hopelessly mired in seaweed.

In reality it’s hallmarks are calm blue waters and the brown Sargassum algae that gives it its name—and gives sustenance to the turtles. 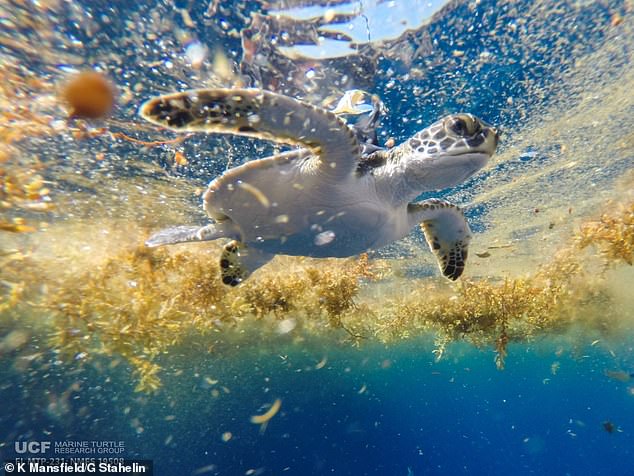 Of the 21 turtles that were tagged with transmitters, two-thirds dropped out the Gulf Stream and entered the Sargasso, staying there at least until their tags stopped transmitting

In the new study, the young green turtles were released into the Gulf Stream ocean currents about 10 miles offshore from the beach where they were born and tracked for up to 152 days.

Of the 21 turtles, two-thirds departed the Gulf Stream and the North Atlantic gyre and entered the Sargasso, staying there until their tags stopped transmitting.

‘We found that the green turtles actively oriented to go into the Sargasso Sea and in even greater numbers than the loggerheads tracked in our earlier work,’ said Kate Mansfield, director of the University of Central Florida’s Marine Turtle Research Group.

‘Granted, our sample sizes aren’t huge, but enough turtles made this journey that it really throws into question our long-held beliefs about the early lives of sea turtles.’

The Sargasso makes an ideal habitat for the young turtles, Mansfield told Live Science. The seaweed provides camouflage and warms up the water for the cold-blooded creatures, who can dine on juvenile shrimp, crab, fish and other marine life that also mature in the Sargasso. 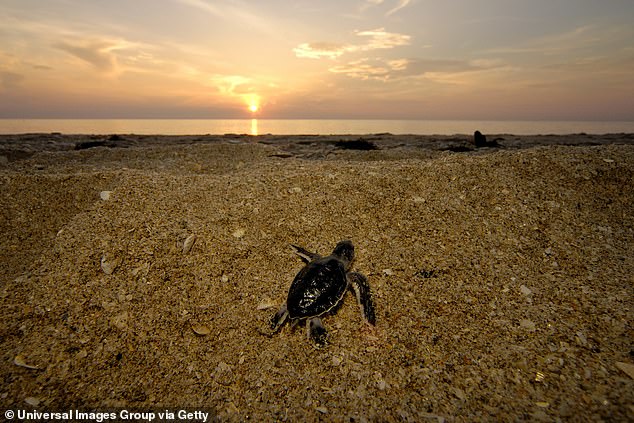 Green turtles hatch on the beach then make the perilous journey to the Atlantic, not returning to coastal waters until they’re juveniles

The Sargasso Sea Commission will use the data to identify threats to the sea and its marine life, including climate change and pollution.

‘If we don’t know where they are and what parts of the ocean are important to them, we are doing conservation blindfolded,’ said Wyneken.