By restoring soil health, Donald Wyse hopes to transform farms, to the benefit of farmers and their customers.

Donald Wyse in a greenhouse at the University of Minnesota in St. Paul. “The state of Minnesota has 20 million acres of agricultural land. What percentage of that land has a cover crop on it?” he said. “Two percent.”Credit…Jenn Ackerman for The New York Times

Send any friend a story

As a subscriber, you have 10 gift articles to give each month. Anyone can read what you share.

Visionaries is a limited series that looks at figures who are trying to transform the way we live.

If you haven’t heard the term “regenerative agriculture,” you probably will soon — it could transform our approach to farming. Like organic farming in the 1960s, however, it’s a movement awash with grand promises. Then there are practical visionaries like Donald Wyse, who are putting roots in the ground — literally.

The concept behind regenerative agriculture — essentially restoring soil health — is not new, but in the last few years it has been adopted by eco-conscious farmers and experts, international NGOs and Fortune 500 corporations. The movement promises to rebuild the fertility of depleted topsoil, reduce carbon dioxide levels in the atmosphere, prevent fertilizers from polluting rivers and aquifers, and promote biodiversity. What might that look like, practically speaking? Dr. Wyse may be close to an answer.

After growing up on his family’s farm in Ohio and eventually earning his doctorate in plant physiology and biochemistry from the University of Michigan, Dr. Wyse, 74, became a professor at the University of Minnesota specializing in the management of perennial weeds in the grass-seed industry. The ryegrass varieties his team developed in the early 1990s are still a high-profit crop in Minnesota’s northernmost counties.

In 2012, Dr. Wyse co-founded the Forever Green Initiative, which is working to make regenerative agriculture a reality by convincing farmers to keep plants in the soil year-round, rather than leaving the soil bare. The benefits are myriad: Nitrates from fertilizer are less likely to leach into the water; corn and soybean farmers don’t have to apply as much fertilizer or pesticides; and roots mean more organic matter, which makes the soil more fertile.

Dr. Wyse now coordinates a team of 55 University of Minnesota researchers, as well as partners at universities and private companies across the region, who are developing 16 crops capable of thriving in the Upper Midwest. Some will be planted as cover crops after the main harvest, growing underneath Minnesota’s thick snows until they can be harvested in the spring. Others are perennials such as Kernza, a wheatgrass variety that produces grains year after year without having to be tilled up and replanted.

The university owns the crops, but releases them to private companies to produce and sell seeds, creating commercial markets, so farmers have an economic incentive to change generations-old practices. After 20 years of quiet effort, Dr. Wyse and his teams may be on the brink of success. In the next decade, if his vision holds true, the Upper Midwest’s Corn Belt could become the most forward-thinking agricultural region in the country. (This interview has been edited and condensed.) 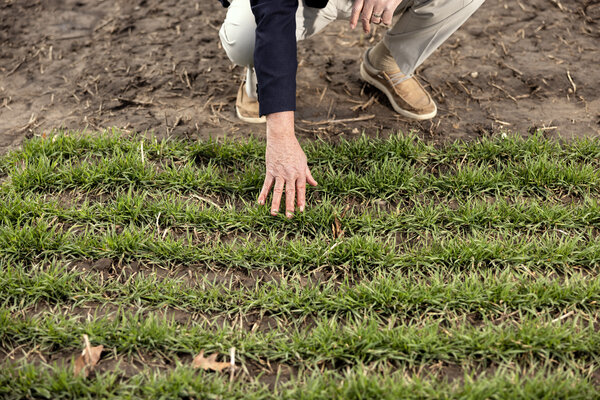 How did your research evolve from studying weeds and turf grass to regenerative agriculture?

In 1974, my position was created by a group of farmers in Roseau and Lake of the Woods Counties. In the 1950s, the university had released a turf-type Kentucky bluegrass line called Park, which started the grass-seed industry in northern Minnesota.

Why did those farmers want to plant perennial grasses? It was tough to get crops in that area to market. They wanted a crop that was in the ground for a number of years and that they could harvest during the middle of the summer. Those are the folks who taught me the value of having perennials on a landscape.

How did the Forever Green Initiative come about?

Well, if you really think about it, that happened in 1974. The philosophy has been there for a long time. One day, I was making a presentation, and I basically laid out a title for new resilient, agriculture systems: evergreen crops. Forever Green caught on.

What’s the relationship between the university and the initiative?

We have 16 [crop-development teams]. Each of those are coordinated from developing the basic science — genomics, breeding agronomics — through commercialization and building the supply chain. That’s what makes us unique in the world. We basically have 16 mini companies. What I do is make sure these teams are coordinated and funded across that entire platform.

Every agronomic crop that’s produced in the state of Minnesota, other than sugar beets, came from the University of Minnesota’s department of agronomy and plant genetics. Hybrid corn was developed there, along with soybeans, wheat and perennial ryegrass.

How did you settle on these 16 specific crops?

If you’re living in Minnesota, what do you think the biggest challenge would be if you wanted to plan for continuous living cover?

Damn straight. You look across a wide range of potential crops that we know are extremely winter hardy. Then, you say, OK, this kind of pennycress or camelina can produce protein and oil. What’s the value of that in the marketplace? Perhaps biofuel.

The state of Minnesota has 20 million acres of agricultural land. What percentage of that land has a cover crop on it? Two percent. In some parts of the Midwest, it’s four. The reason that Minnesota is low is because of the short length of our growing season. You’re not going to get any ecosystem services if you kill a cover crop in Minnesota in the first or second week in April. You’re just wasting your time, and every farmer knows it.

So the value of these cover crops for corn-soybean farmers is that this new crop could benefit their land, benefit the environment and become a second source of income?

Yes. These cropping systems actually increase yield per acre. It’s up to us to make sure that these new crops also have the highest value possible.

You have another set of organic farmers who are interested in planting perennial crops to avoid commodity crop markets altogether.

We already have an elderberry co-op, a group of 30 farmers who are starting to make partnerships with the industry. We’ve organized hazelnut farmers across Minnesota and Wisconsin. You can now go online and buy hazelnuts, oil and flour. In our program, we’re developing the germ plasm for consistent, uniform and larger nuts.

Perennial wheatgrass gets all the attention, but it’s not going to be the big landscape changer. It’ll be a long time before we have a million acres of Kernza. Within less than a decade, we’ll have more than a million acres of pennycress and camelina on the landscape. That’s because the market for biodiesel is huge.

How do you hope this will change agriculture in Minnesota, or perhaps the broader Midwest?

I’m hoping that we are able to give farmers new tools to protect our water, our land and other natural resources associated with it, in a way that the farmers will have the economic capacity to make that change.

Some people complain about farmers and the way they operate. Why are they doing all of these things the way they’re doing them? It’s because all the policy, all the infrastructure, all the inputs, everything has been dedicated to those commodity crops.

What I worry about is developing an even playing field, making sure these new crops are treated the same way as commodity crops. So there is crop insurance, a safety net. We can build the germ plasm and build the markets, but those farmers have to be protected because the banker will demand it.

What do you want to make sure people know about what you do?

I hope that the work that we’ve done shows that there is a need for investing in people who can help organize — the science, the policy, the supply chain and commercialization. That’s kind of the role I have played.