Home » Science » Halloween: Experts warn the public not to dump pumpkins in the woods

Wildlife experts urge the public NOT to dump their pumpkins in the woods after Halloween amid fears decaying gourds attract rats, kill hedgehogs, and upset fungi

Dumping your Jack-O-Lantern in the woods after Halloween may seem like a harmless thing to do, but experts have warned that it can fatally affect wildlife.

Thousands of tonnes of pumpkin get thrown away after Halloween, many of which get discarded in nearby woodland, according to Woodland Trust.

But pumpkin flesh can kill hedgehogs and other animals, as well as attract rats and upset soils, plants and fungi.

Instead, the charity advises the public to responsibly dispose of their pumpkin in a food waste bin or compost heap, or eat it if it’s still in a good condition. 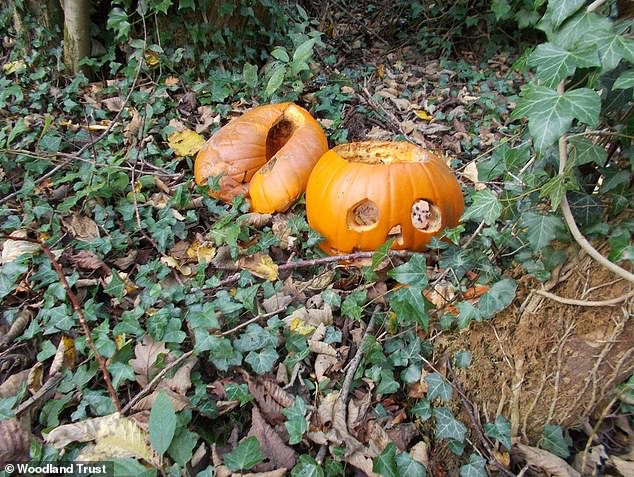 Woodland Trust has noticed a trend in recent years for Halloween pumpkins to be taken to the nearest wood and dumped (pictured). The charity says this can have a fatal effect on hedgehogs and other creatures 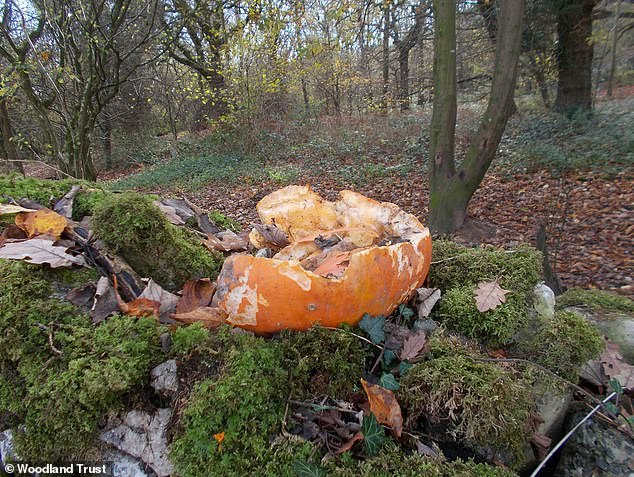 Pumpkin flesh can be fatal for hedgehogs, attracts colonies of rats and also upsets woodland soils, plants and fungi

HOW TO DISPOSE OF YOUR PUMPKIN

– Put in your food waste bin or compost heap

– Donate to farms or zoos for animal feed

– Bury it in your garden for invertebrates

– Turn it into a bird feeder by hanging from the trees

– Eat it if it’s still in a good condition

Hedgehogs are opportunistic eaters and spend autumn and early winter building up their fat reserves for hibernation.

‘As a result, hedgehogs can gorge themselves on easily available food like dumped pumpkins,’ said Trevor Weeks at East Sussex Wildlife Rescue and Ambulance Service.

‘Although not toxic to them the fleshy fibrous fruit can cause stomach upsets and diarrhoea as they are not designed to eat large quantities of fruit.

‘This can lead to them becoming bloated and dangerously dehydrated which in turn can be fatal.

‘At this time of year, they can’t afford to become ill, or they may not survive the winter hibernation.’

Woodland Trust staff have increasingly noticed a trend over the last few years of pumpkins being dumped in the woods in the days after October 31.

‘A myth seems to have built up that leaving pumpkins in woods helps wildlife,’ said Paul Bunton at Woodland Trust.

‘People think they’re doing a good thing by not binning them in landfill and instead leaving them for nature.

‘But pumpkin flesh can be dangerous for hedgehogs, attracts colonies of rats and also has a really detrimental effect on woodland soils, plants and fungi.

‘We can’t leave dumped pumpkins to rot so we end up with an orange mushy mess to deal with at many of our sites.’ 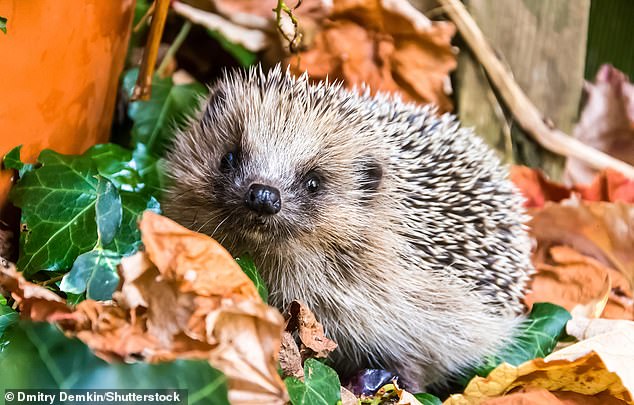 Hedgehogs are opportunistic eaters and they spend autumn and early winter building up their fat reserves for hibernation. They can gorge on pumpkin flesh if they find it in the woods, but this can make them very ill, say wildlife experts

– Take the lid off your jack-o’-lantern, or if you have a fresh pumpkin, cut the top off and scoop out the insides.

– Push strong sticks through so that they jut out to create perches for the birds.

– Fill with bird seed and place on a bird table, or tie strings to the sticks and hang from a sturdy branch.

– Keep it clean and add it to the compost heap when it starts to rot to avoid harming the birds.

The Woodland Trust has tips on its website on how leftovers can be best used, including making a pumpkin birdfeeder for the garden.

These pumpkin bird feeders should be kept high off the ground well away from hedgehogs, and should be removed when they start to rot.

Environmental charity Hubbub is also encouraging the public to eat their pumpkins after Halloween, as long as they are in a good condition.

It claims Brits will throw away 22.2 million uneaten pumpkins this Halloween – around £32.6 million worth – at a time when food bills are at an all-time high.

Even if a pumpkin is labelled a ‘carving pumpkin’ at the shops, it is still perfectly edible, and can be carved up and put in the oven to use as a basis for soups, stews, curries or pumpkin pie.

Another option is blending up the flesh in a food processor and making a homemade pumpkin spice latte, with the addition of coffee, milk, cinnamon, ginger and nutmeg.

Only the stalk of the vegetable isn’t edible, and the rest can even be frozen if it’s not cooked immediately after Halloween. 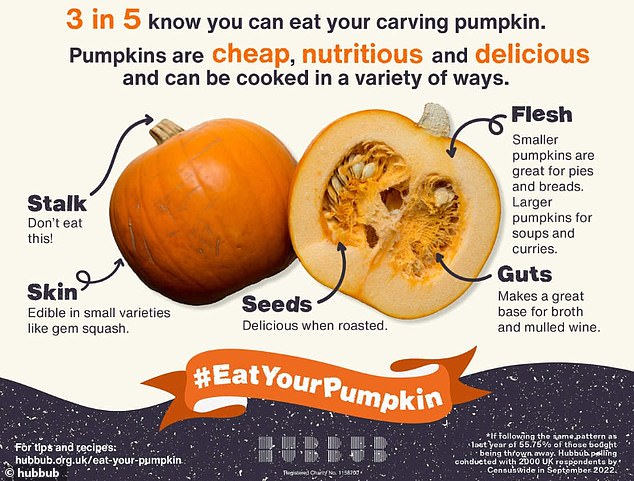 ‘Pumpkins are a cheap, nutritious and versatile source of food, which can go a long way and are great for feeding a crowd,’ said Ellen Rutherford, head of food at Hubbub.

‘People might find it easier to throw away their pumpkin carvings, particularly if they’re juggling the pressures of costume making and entertaining too.

‘However we’re really keen to spread the word that cooking this delicious vegetable can wait until after the madness of Halloween is over.’

HOW TO KEEP YOUR PUMPKIN FRESH FOR HALLOWEEN, ACCORDING TO SCIENCE

Halloween is just around the corner, and many of us will be carving our pumpkin to welcome trick-or-treaters on Monday.

Pumpkin decorations are getting more and more artistic and creative, requiring hours of painstaking handiwork.

But too often can all that painstaking labour go to waste when, just hours before night falls on October 31, the fruit collapses into mush. 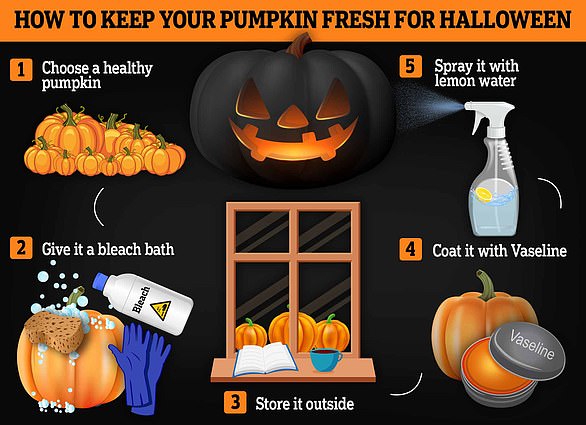 To prevent this terrifying fate, professional pumpkin sculptor Szimonetta Zombori has revealed how to keep your pumpkin looking its best for Halloween.

This includes giving it a bath in bleach to kill any bacteria that could speed up decomposition, and rubbing Vaseline into its surface.