Eating a bag of worms or fried crickets may be unsettling. But the numbers suggest many people are going to change their minds in the next few years.

In 2019, Barclays predicted that insects would become an $8 billion business by 2030. More recent figures from analysts at Research and Markets, projected double-digit annual growth in the market and that 1,398,862.6 tonnes of insects would be produced between 2020 and 2027.

This comes as interest in climate-friendly food grows. According to the UN Food and Agriculture Organisation, insect farming produces 1% of the emissions of the equivalent output from cattle or pigs.

A landmark EU ruling in January that certified yellow mealworms safe for human consumption has only spurred the industry on.

Insider profiles the brands hoping to ride the predicted boom. 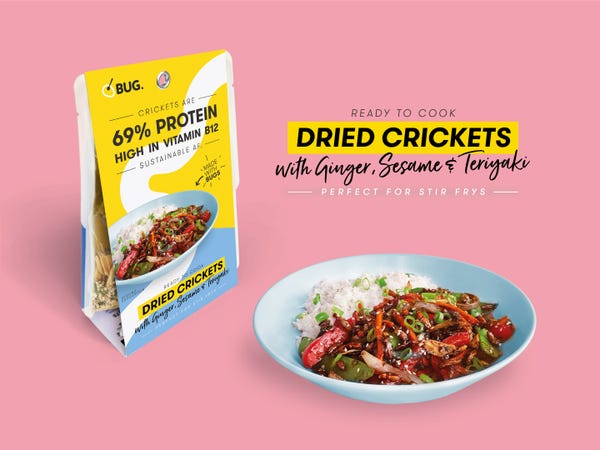 Pioneering in the world of insect recipe development, Better Universal Grub, or BUG, wants to be the answer to the question of how we can make sure meat is taken off the table, integrating more sustainable protein sources into our diets. Recipe kits and tips for cricket stir fry, carbonara and salads are on the menu, alongside buffalo worm falafels and mealworm apple crumble.

The company’s founders, Aaron Thomas and Leo Taylor, used their own money to fund its initial efforts when they created it during the UK’s first national lockdown last year, but are in the process of fundraising so it can grow, outsource manufacturing and bump up its marketing.

They are close to securing the £200,000 ($279,000) in investment they have been looking for. The pair are also planning to start a further crowdfunding campaign on CrowdCube in March. 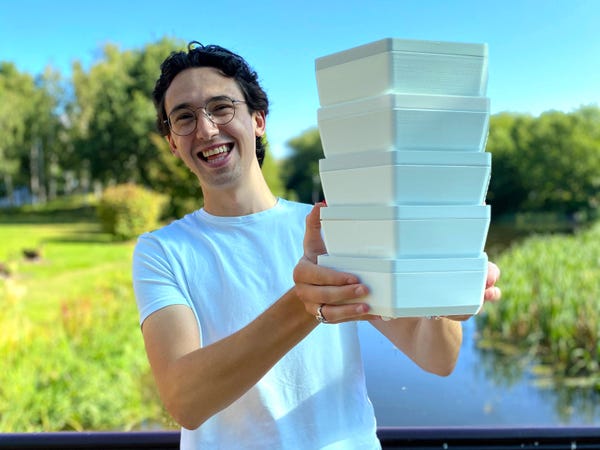 Industrial designer Thomas Constant founded Beobia in 2019, seeking to create a product for producing food at home that has a minimal environmental impact.

He invented a tabletop insect cultivation unit. Made from recycled bioplastic, it is a closed-loop production system: the insects eat compostable vegetable waste; then, growing over a matter of days, they become food for humans. The excrement from the insects can be used as a plant fertilizer; and thus the circuit is complete. One input for two outputs.

By the time the kickstarter closed, the amount raised had more than quadrupled from its original target to £22,000 ($30,650).

The fledgling company is due to open up a new investment round in early spring with a view to expanding into new markets. 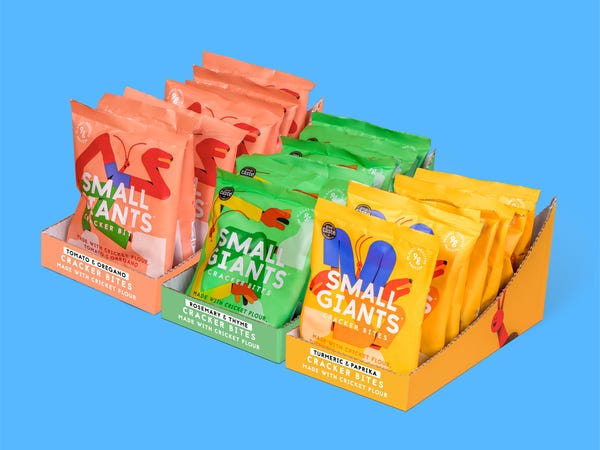 Small Giant’s crackers are made with 15% cricket flour, bringing an umami taste, a protein punch and a boost of Vitamin B12.

The company recently clinched a deal with UK supermarket chain Sainsbury’s which is due to stock two flavors of the treat: rosemary & thyme and tomato & oregano. It is one of the only insect-based brands currently available on large UK supermarket shelves.

Originally called Crické, Francesco Majno and Edoardo Imparato co-founded the company launched in the UK in 2019.

It has since raised £150,000 ($208,980) investment, allowing it to rebrand and expand its product range. The newly re-imagined Small Giants, was launched in November last year. 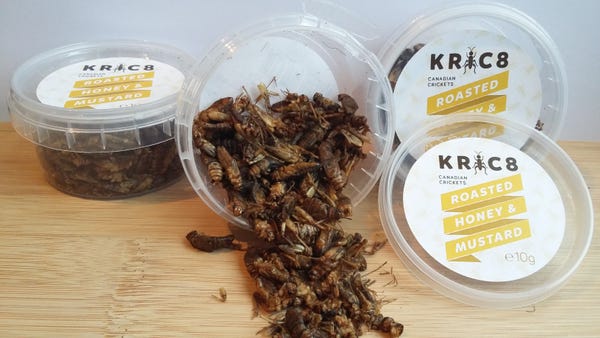 In creating online shop Kric8, founder Ross Bell harnessed his interest in bushcraft and travel, alongside his experience in the food and drinks business.

In pre-COVID times, the four-year-old shop would tour food shows and sell bug-based pasta as well as entomophagy merchandise, including hats and posters.

Bell told Insider that, in the last two and a half years, he has seen momentum grow in the edible insects market.

On the supply-side, he added, it’s now easier to obtain the raw ingredients he needs to make his products, as new UK farms have ramped up production of insects. He used to have to import crickets from Canada.

He has ambitions for his products to be on the shelves in UK supermarkets and other stockists in the future. 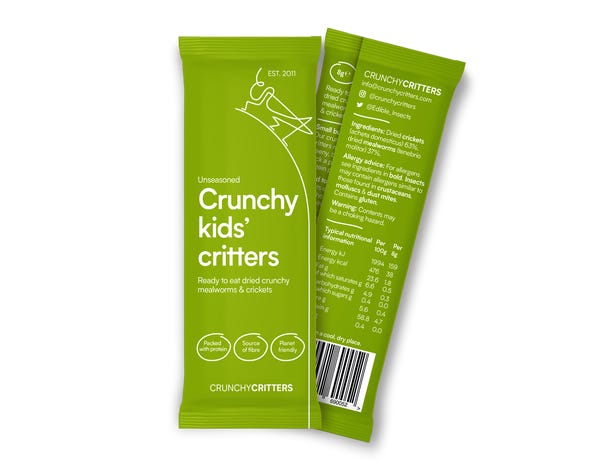 Established in 2011 in the UK, snack brand Crunchy Critters originally drew inspiration from the bush tucker trials in which contestants in “I’m a Celebrity, Get Me Out of Here” were forced to eat various foods that repulsed the audience.

The brand has evolved alongside attitudes towards eating insects.

Packaged products underwent a rebrand in recent years and now include flavored mealworms with chocolate and fruit; a spiced paprika flavored mix; salt and vinegar worms with roasted beans and peas; and a purely insect-filled mix of crickets, locusts and worms, marketed towards kids.

The brand also retails cricket powder as a food supplement.

Launched in 2013 as a concept test on whether bugs could be successfully brought to the UK market, Eat Grub took inspiration from a business trip to Malawi, and the idea of bugs as a nutritionally complete superfood as its launchpad.

The business trilled a five-course insect tasting menu in east London in 2014, which did 500 covers in five days. It went on to develop a cooking range for Planet Organic and set about developing an energy bar that year.

The brand has developed a number of products over the years, with roasted crickets and insect-based flour among them.

It retailed in UK supermarket chain Sainsbury’s in 2018, which led to a deal with Lidl in Germany in 2019, where it has distributed close to 200,000 items.

In Pembrokeshire, Wales, there’s a 100-acre farm, created with the purpose of putting research and science about sustainability into practice.

Before COVID, the business also offered “close up” sessions with insects for kids, where they can hold the tiny invertebrates.

It also has a dung beetle research unit which plans on supplying native dung beetles to farmers and horse owners to replenish populations.

The farm has won awards, including the most exciting new business award from the Pembrokeshire Tourism board in 2018.

Born in 2013 out of a project for the Duke of Edinburgh Awards – an achievement award initiative for UK schoolchildren – London-based Horizon Edible Insects farm has been growing and developing new products and recipes.

Pre-COVID, the eight-year-old business ran cooking classes and toured food shows, spreading the word about the possibilities of bug farming for sustainability.

Current recipes in their roster include curry and coriander mealworm fritters, mealworm burgers and cupcakes.

The growth of the business has led to interest from restaurants in selling its bug burger and the owners hope to start selling to more eateries in the near future.

They have seen an uptick in interest from the culinary scene as sustainability rises up the agenda, the company told Insider, and are considering expanding into locusts. 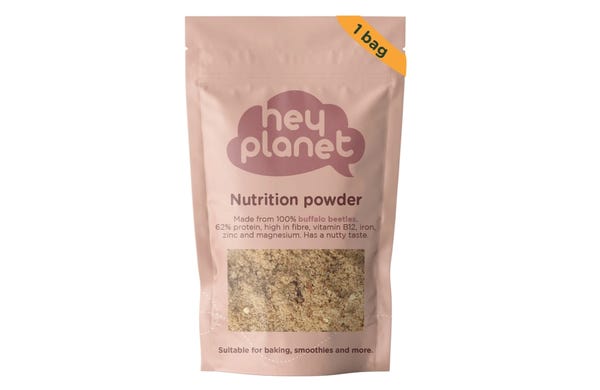 Danish brand Hey Planet was born out of a trip to Tanzania, where one of the founders first ate fried grasshoppers.

Now, it makes protein bars from organic dates and nuts, with each containing more than a tenth buffalo beetle powder. Their recipe packs about 500 beetles into one bar.

Amid the coronavirus lockdowns, the brand has started selling snack care packs you can send to a friend or relative with a personalized note.

The shop hosts an eclectic mix of chocolate covered treats and healthy energy bars, based around cricket and beetle protein.

Those looking for something savory can head for their cricket crispbread. The brand is run by a small team who also offer their services speaking at events and corporate workshops. 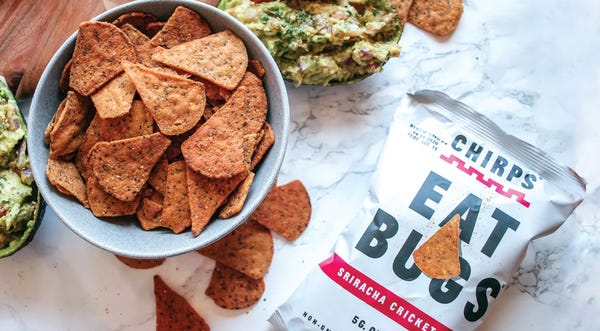 American brand CHIRPS makes a range of products including cricket-based protein shakes. The tubs of powder come in chocolate and vanilla in several different sizes.

Founded in 2013 by three university students, the brand gained traction in 2017 when it appeared on Shark Tank, a show where young companies showcase their wares in hope of gaining investors.

At the time, it brokered a deal with Mark Cuban, an American billionaire, for $100,000 in exchange for a 15% stake of the business.

CHIRPS had projected it would make $1.5 million in its trading year following the show.