With much of the country covered in a blanket of snow this week, many of us will be tempted to whip out our phones for a wintery snap.

But before you do, it may be worth taking a few precautions to help protect your device from the elements.

Tech expert Catherine Hiley, from Uswitch.com, has shared her tips on how to keep all your gadgets working this winter. 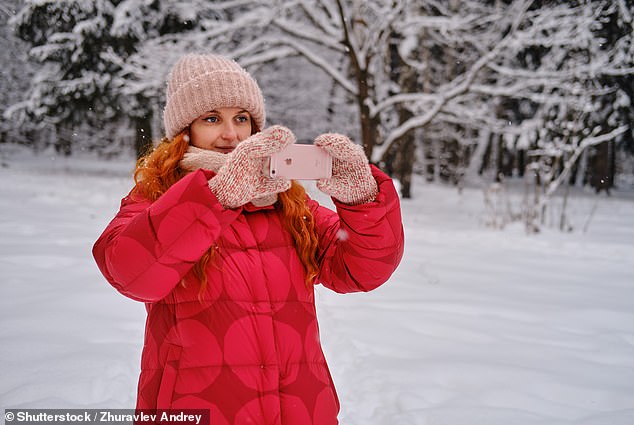 How does cold weather affect gadgets?

Many gadgets are powered by lithium-ion batteries, which rely on a chemical reaction as they discharge power.

A drop in temperature reduces the speed of chemical reactions while increasing the resistance of electrical components.

This means that the battery will find it harder to deliver power as it gets colder, so devices may lose charge more quickly, become less responsive or even shut down.

In addition, most touchscreen phones have what’s known as a ‘liquid crystal display’, or LCD.

This is where the individual pixels contain a liquid crystal in between two electrodes, which move when an electric field is applied and allow light to pass through.

When the screen gets colder, the liquid within its pixels becomes more viscous, and therefore it becomes less responsive to touch.

Plus, if you take your phone inside after it has become very cold outdoors, moist air can quickly condense onto its surface, making it susceptible to water damage.

Both Apple and Samsung recommend keeping iPhones and Galaxy devices between 32°F and 95°F (0°C and 35°C) to ensure they work properly.

How can I keep my gadgets working?

1. Charge before you go

As gadgets powered by lithium-ion batteries can lose charge more quickly in colder temperatures, it is good to be on 100 per cent before you head outdoors.

Ms Hiley said: ‘The biggest toll that chilly weather takes on your handset is how it affects battery life.

‘The lithium-ion batteries found in smartphones are known to struggle in cold temperatures.

‘Be aware of this and give it a full charge before you take it outdoors, as you may find the battery drains quicker than normal.’

Keeping your phone in a thick, strong case is both great for keeping it warm and safe for if you slip on the ice.

Ms Hiley said: ‘When we brace ourselves for the cold weather outside, we turn to coats, hats and scarves to keep us warm – why should our phones be any different?

‘One of the best ways you can keep your phone warm and avoid battery drain is by keeping it in a protective case that’s insulated from the elements.

‘Keeping it in a secure pocket can also help, as it will benefit from your body temperature.’

Until someone asks for the password, our Wi-Fi routers are often out of sight and out of mind.

But if you keep yours in particularly cold place, it may be susceptible to water damage from the moisture in the air.

Ms Hiley said: ‘If your router is placed in an unheated area like a garage, be mindful of condensation in or around the device, which could seep into the unit.

‘Consider putting it in a small box for insulation with holes for airflow, so it can keep it running smoothly.’ 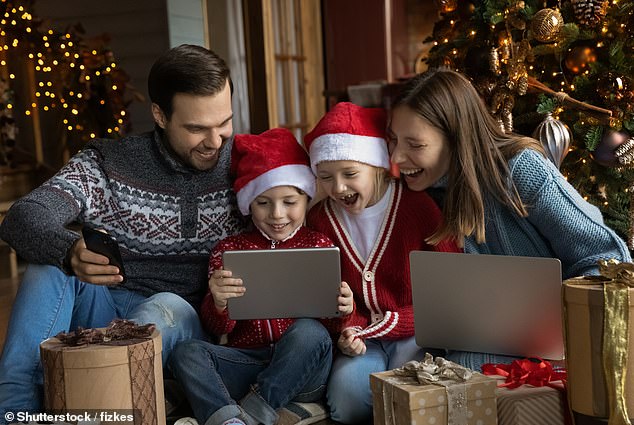 Ms Hiley said: ‘When the mercury drops, people tend to stay indoors, which leads to a lot more strain on broadband networks, as bandwidths are stretched by large numbers logging on. So, particularly if we’re in the middle of a cold snap, it’s worth avoiding peak times for data-heavy activities like movie or game downloads’ (stock image)

Sticking on a Netflix Christmas movie while snuggled in a blanket is one of the cosiest ways to get through a cold snap.

Unfortunately, this pleasure is almost universal, meaning a lot of us will have the same idea at the same time.

Ms Hiley said: ‘When the mercury drops, people tend to stay indoors, which leads to a lot more strain on broadband networks, as bandwidths are stretched by large numbers logging on.

‘So, particularly if we’re in the middle of a cold snap, it’s worth avoiding peak times for data-heavy activities like movie or game downloads.’

If you’re excited for a new programme on BBC or ITV, it might be a good idea to schedule it to record.

That’s because a particularly cold evening can affect external antennas, like a Sky dish, and Ms Riley said that this can lead to the TV signal cutting out.

Harsh weather can also put a strain on mobile broadband routers, so even if you’re watching via the internet, you may want to check outside before getting too comfy.

Ms Riley said: ‘Be prepared for the occasional drop in signal. Don’t be surprised if you encounter buffering during an HD film.’

HOW DOES COLD WEATHER AFFECT BATTERIES?

Many gadgets are powered by lithium-ion batteries, which rely on a chemical reaction as they discharge power.

A drop in temperature reduces the speed of chemical reactions while increasing the resistance of electrical components.

This means that the battery will find it harder to deliver power as it gets colder, so devices may lose charge more quickly, become less responsive or even shut down.

6.  Power down your phone

When enjoying the snow or strolling through a chilly Christmas market, your smartphone will be working extra hard to keep running properly.

Ms Riley recommends reducing the number of apps and functions it has to do, in order to conserve its battery life and responsiveness.

She said: ‘If you’re going to be exposed to sub-zero temperatures, turn on low power mode, turn off location services and close down apps running in the background that you’re not using.

‘You could also put it on Airplane Mode to conserve battery, which will still give you access to apps that don’t require an internet connection.’

7. Don’t leave them out in the cold

It’s easily done – a snowball fight is kicking off, so you slam your phone on the nearest surface to have both hands available for moulding your weapons.

But forgetting about it could result in you having to add a very expensive item to your Christmas list.

Ms Riley said: ‘This may seem obvious but it’s something we hear about all the time in the winter months – people leaving their gadgets outside in sub-zero temperatures only to discover they’re not working later on.

‘So if you’re sat outside, keep your phone in a pocket rather than out on a table.’

8. Get them backed up

Phones get dropped in the snow, laptops get hot chocolate spilled on them – so its worth making sure your precious photos are safe before accidents happen.

Ms Riley recommends backing up all your data to avoid any loss if your gadgets get damaged by the cold weather or hot drinks.

Ms Riley said: ‘The festive period is a time of gift-giving for many households, meaning that a lot of tech gets purchased.

‘When buying a new device, whether it’s a laptop, smartphone, tablet or games console, consider taking out insurance that can cover you against all of the elements.’

Find out how Rudolph the Red Nosed Reindeer, The Grinch That Stole Christmas, and A Christmas Carol just MIGHT be possible, according to science.

Scientists have also revealed why we love Christmas films so much, and always come back to ones we’ve seen a hundred times before.

And reviewers have found that you might be able to cook your Christmas dinner in an air fryer, plus they are up to three times cheaper than an oven to run.

Spending time in snowy landscapes can can help you love your body, study finds

With December just around the corner, many of us will be looking forward to some snow to help get that festive feeling.

But snowy landscapes could have another benefit, particularly if a relative feels inclined to comment on your figure around the Christmas dinner table.

A new study from Anglia Ruskin University in Cambridge has found that spending time in the snow can make you feel better about your body.

It is thought this is because it helps distract your brain from negative thoughts about how your body looks, and forces you to appreciate how it moves instead.