Home » Science » Jawbone of a giant vampire bat dating back 100,000 years is discovered

The ‘Dracula’ bat with a thirst for blood: Jawbone of a giant vampire bat dating back 100,000 years is discovered in an Argentinian cave

The jawbone of a giant ‘Dracula’ bat dating back 100,000 years has been found in a cave in Argentina.

It is one of the largest vampire bats known to have existed — around 30 per cent bigger than its closest living relative, the common vampire bat, which has a wingspan of about 20 inches (50cm).

The extinct species Desmodus draculae, which lived during the Pleistocene epoch in Central and South America, was first discovered in Venezuela in 1988. 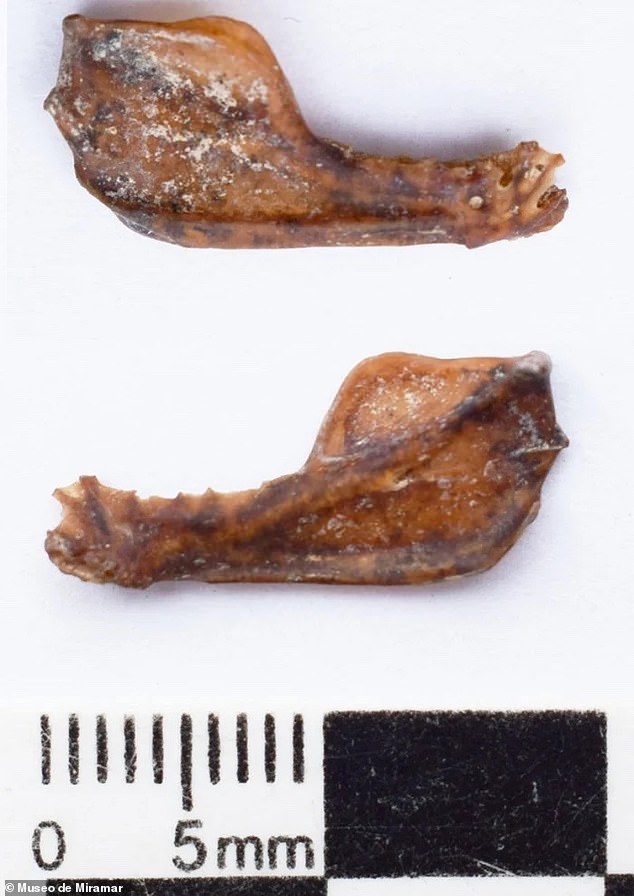 The jawbone of a giant ‘Dracula’ bat (pictured) dating back 100,000 years has been found in a cave in Argentina. It is one of the largest vampire bats known to have existed

Other remains have been found that are recent enough not to have fossilised, suggesting the species may only have died out a few hundred years ago.

‘They are the only family of bats in the world [that] arouses curiosity from the legends of the Transylvania and its creepy Count Dracula,’ said palaeontologist Mariano Magnussen of the Miramar Museum of Natural Sciences in Argentina.

‘But in reality they are peaceful animals that feed on the blood of animals, and sometimes humans, for a few minutes without causing discomfort…

‘The only bad thing is that they can transmit rabies or other diseases if they are infected. Surely their prehistoric representatives had similar behaviours.’

Today, just three of the 1,400 known bat species are vampire bats that live solely on the blood of other creatures.

They are the common vampire, white-winged vampire and hairy-legged vampire bat species, all found only in Central and South America.

The jawbone found in Argentina was recovered from Pleistocene-era sediments in a cave not far from the Buenos Aires town of Miramar.

It was being used as a burrow by a giant sloth when the bat was alive 100,000 years ago, which could provide a clue about how it survived.

Some experts think that Desmodus draculae fed on megafauna, a set of large animals including the giant sloth that lived on Earth during the Pleistocene epoch.

If true, it would support theories that the bat species declined following the extinction of megafauna around 10,000 years ago.

‘The jaw of Desmodus draculae was found inside a cave or burrow 1.2 m (3.9 feet) in diameter attributed to a giant sloth of the family Mylodontidae, such as Scelidotherium,’ said Dr Daniel Tassara, a palaeontologist at the Museo Municipal de Ciencias Naturales Pachamama.

‘We do not know if this vampire entered the cave to feed, take refuge, or was prey to another animal.’

Researchers said the species was ‘the last of the giant flying mammals’, adding that it ‘became extinct during the colonial period, around 1820, possibly as a consequence from the Little Ice Age.’

It had long been thought that a species of vampire bat known as the hairy-legged vampire bat only fed on the blood of birds. 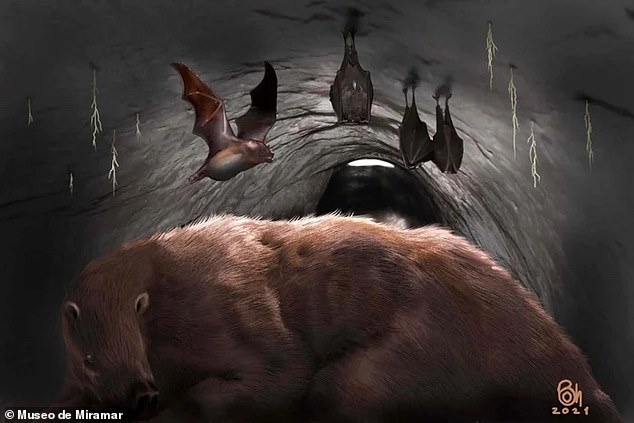 However, in 2018 scientists discovered for the first time that they sometimes feed on humans too.

Researchers from the Federal University of Pernambuco in Brazil set out to look at how the species would behave in a situation of scarcity of birds.

The team analysed 70 faeces samples from a colony of hairy-legged vampire bats living in the Catimbau National Park in Brazil.

To their surprise, they found that three samples contained traces of human blood.

The researchers said that human intrusion in the national park could have driven the vampire bats to try mammal blood.

In their paper, published in Acta Chiropterologica, the researchers wrote: ‘The record of humans as prey and the absence of blood from native species may reflect a low availability of wild birds in the study site, reinforcing the impact of human activities on local ecological processes.’

The latest research on Desmodus draculae is published in the journal Ameghiniana.

HOW BATS CAN ACT AS ‘RESERVOIRS’ FOR VIRUSES WITHOUT GETTING SICK

Bats act as ‘reservoirs’ of numerous zoonotic viruses, including SARS-CoV, MERS-CoV, Ebola virus, and, possibly, SARS-CoV-2, the pathogen behind the ongoing coronavirus pandemic.

They identified mechanisms that balance the activity of key proteins that play a major role in mediating immunity and inflammatory responses.

These mechanisms enable bats to harbour and transmit zoonotic pathogens without setting off the detrimental consequences of immune activation, like the symptoms coronavirus-infected humans have.

One of the mechanisms bats use is to reduce the levels of caspase-1, a protein that triggers a key inflammatory cytokine protein, interleukin-1 beta (IL-1β).

Another mechanism they employ hampers the maturation of IL-1β, through a finely-tuned balancing between caspase-1 and IL-1β.

‘Our findings may offer potential insights to the development of new therapeutic strategies that can control and treat human infectious diseases.’