Lucy Bronze, the best women’s football player in the world, has said that a greater understanding of players’ menstrual cycles can give athletes an ‘extra inch’.

The Manchester City player was voted the best player in the world in FIFA’s 2020 awards and has spoken about how little is known about the impact of periods in sport.

Women’s bodies undergo monthly fluctuations in hormone levels leading to episodic bouts of inflammation, swelling and a raft of other side-effects.

Ms Bronze reveals that during the 2019 World Cup, where the Lionesses lost in the semi-finals to Sweden, the players had received very little education about the role menstruation plays on performance.

But she says there is a evolution afoot with female athletes learning more about how to tailor their training around their cycle to improve their performance. 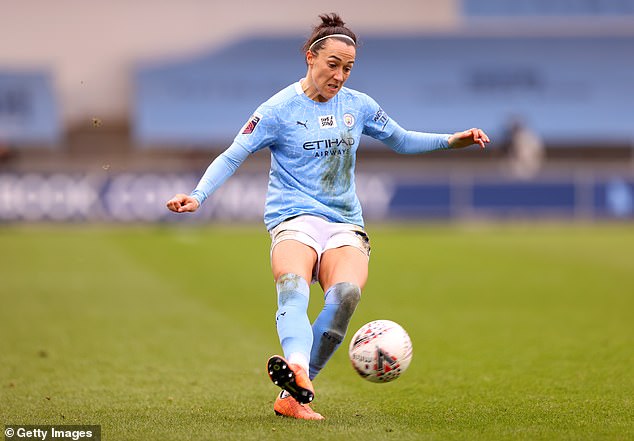 Lucy Bronze (pictured), the best women’s football player in the world, has said that a greater understanding of players’ menstrual cycles can give athletes an ‘extra inch’ 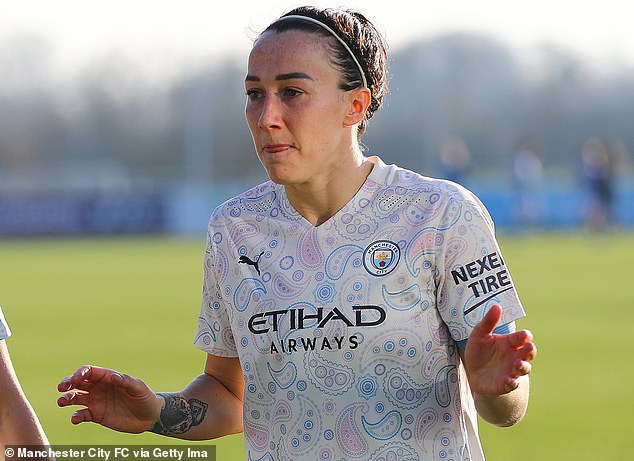 Ms Bronze reveals that during the 2019 world cup, where the Lionesses lost in the semi-finals to Sweden, the players had received very little education about the role menstruation plays on performance

Women are significantly more likely to develop blood clots from taking the contraceptive pill than by having the Oxford-AstraZeneca vaccine, doctors have pointed out.

Fourteen countries in Europe – including France, Germany, Italy and Spain – suspended use of the Oxford jab this week over unproven fears it increases the risk of thrombosis or pulmonary embolism.

Scientists fear Europe’s moves could now fuel ‘more extreme anti-vaccine sentiment’ despite findings by the EU, UK, WHO and AstraZeneca that there is no evidence of a link to the sporadic blood clots.

Dr Paul Ettlinger, GP at The London General Practice, pointed out contraceptive pills taken by millions of women pose a far greater risk of blood clots as he accused governments of ‘scaremongering’ and told MailOnline there was ‘no evidence’ the vaccine increased risk.

While 37 people out of 17million inoculations in the EU and UK have reported blood clots, women taking certain types of the contraceptive pill face much starker odds each year.

One in 1,600 people taking combination hormonal birth control will suffer from blood clots, compared to just one in 459,000 of those taking the Oxford vaccine – as far as current figures reveal.

The 29-year-old footbaling star from Northumberland said that all changed when sports scientist Dawn Scott joined the coaching staff.

Dr Scott, originally from Newcastle, was part of the staff which helped the US women’s national team win gold at the World Cup.

Ms Bronze credits Dr Scott and her knowledge and expertise for educating the England players about the importance of understanding their periods.

Bronze said former England manager Phil Neville embraced Scott’s methods when she came on board, and that the male sports science staff at Manchester City ‘are probably more comfortable than most girls about speaking about it’.

‘I wouldn’t know any of this stuff if it wasn’t for Dawn,’ Bronze told the PA news agency.

‘In 2019 at the World Cup, an article came out that Dawn had released about the work she had done with the US team.

‘Obviously they won the World Cup and it’s fine margins that win you the World Cup, and potentially this is a fine margin that we hadn’t explored – not to this full extent – to help bridge that gap between hitting the semi-finals and getting the gold medal.

‘I definitely think it’s one of those things that give you an extra inch, when you have all that information about how menstrual cycles affect your body. It has a huge part to play, and could be a difference.’

Bronze spoke about the subject in ‘The Football Podcast’ from UEFA Together #WePlayStrong, and how it can even help prevent injury and fatigue.

The bodies of women face a greater level of natural fluctuation than their male peers, with menstruation, contraception and pregnancy all affecting their careers in a way that men do not have to contend with.

Speaking to The Telegraph recently, Kimberley Woods, a Team GB kayaker, said her contraceptive pill triggered a downward turn in her mental health.

One of her coaches, Craig Morris, realised in 2019 that sport had never addressed the importance of female hormonal health. After 14 years in his post, he decided to approach Dr Georgie Bruinvels, an expert in female athlete health.

He says the topic received little attention because menstruation was traditionally an area which was deemed to be ‘out of bounds’.

Mallory Franklin, Britain’s best hope of having a representative at the Tokyo Olympics in the canoe single class, then also started paying attention to her period.

After five years of using the implant — another form of hormonal contraception — she ditched it to see how her body responded.

She noticed she was getting back pain and other serious symptoms with her periods but says the advantages outweigh the cons.

Emma Wigs, the reigning paralympic world champion, says by studying her menstrual cycle she was able to find out that in the first half of her cycle, around ovulation, she experiences a small spike in testosterone. 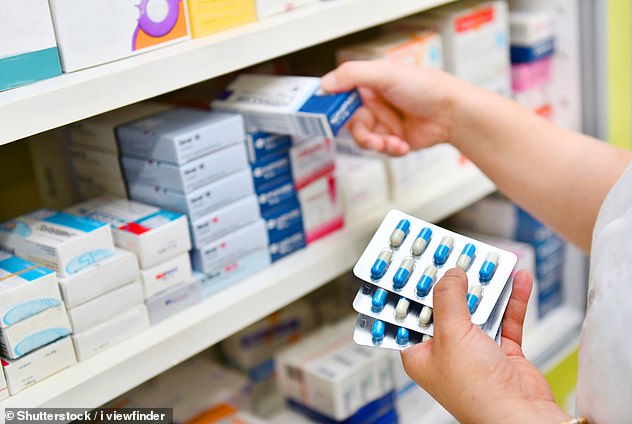 The contraceptive Pill could soon be sold over the counter without a prescription, in a first of its kind move. Picture: Stock

This meant her body responds better to weight training in this window, giving her a tiny edge compared to if she had not had this insight.

A study published this week looked further into the role of the contraceptive pill in female athletes.

It found that when a woman is in her luteal phase, just after ovulation, she has elevated levels of progesterone and is also less likely to suffer a concussion after a blow to the head.

‘Our findings suggest being in the luteal phase (right after ovulation) of the menstrual cycle when progesterone is highest – or being on contraceptives, which artificially increase progesterone – may mean athletes won’t have as severe symptoms when they have a concussion injury,’ said co-author Amy Herrold, at Northwestern University Feinberg School of Medicine.

Analysis of football, lacrosse and rugby players revealed when progesterone is elevated, blood flow in the brain is higher, protecting from side-effects of concussion.

Progesterone is a hormone that is secreted by the corpus luteum, a temporary endocrine gland that the female body produces after ovulation.

It prepares the body for the possibility of pregnancy after ovulation.

It causes a thickening of the uterus lining to allow for an egg to embed into the wall.

After a woman’s cycle is completed and they are not pregnant the gland breaks down and the menstrual cycle begins.

If a woman does become pregnant the chemical continues to be produced to maintain the layer and provide oxygen to the developing fetus.

Said to be ‘oestrogen’s cousin’ or the ‘relaxing hormone’, is thought to help to maintain pregnancy.

It is not typically prescribed on the NHS in the UK unless a woman has three or more miscarriages in a row.

If progesterone levels are too low with regard to estrogen levels, a woman will experience sleep disturbances, irritability, anxiety, weight gain, breast swelling, breast tenderness, and itching, bloating, sweating, loss of memory, and loss of libido.

Despite its widespread use in pregnancy the hormone has also been shown to promote nerve, blood vessel, and bone tissue repair.

This has therefore brought around applications in tissue regeneration.

Ms Bronze told PA: ‘There are certain times within a four-week period where you’re more prone to getting inflammation in your body.

‘Now if you’re talking about playing a game every couple of days, imagine if your body is swelling up more than it normally does.

‘That was definitely something that affected me in the (2019 World Cup) – the energy was just getting drained out of me and potentially that was something I didn’t have any information about.’

Dr Simran Deo, an Online Doctor at Zava, told MailOnline: ‘Although inflammation may play a role in PMS symptoms it is not the only factor to do so.

‘Taking anti-inflammatories whilst experiencing these symptoms may help, as can avoiding behaviors that are associated with inflammation.

‘There is some evidence that exercise can both cause and reduce inflammation. If you aren’t used to exercising it can cause more inflammation, especially if done excessively, for a long time or at high intensities, such as training sessions.’

Ms Bronze said the research in this area had been slow to come through because of the greater focus on the men’s game.

‘If this was men’s sport there would definitely have been research into it (before now),’ she said.

‘I think it’s like anything, there’s 20 times more data on the men’s side than the women’s side.

‘There are more resources put into it, there is more money put into it, so the fact that periods are only a thing that affect female athletes.

‘It doesn’t surprise me that people haven’t bothered to do the research or spend the time and the money, when actually it’s something that probably needs more scientific research behind it than certain other aspects of the sport.’

Professor Herrold from Northwestern echoes this sentiment and says the majority of studies on sports-related injuries is done on men.

‘The trajectory of recovery from mild traumatic brain injury is different in female athletes than male athletes,’ she says.

‘Male athletes have shorter length of recovery than females, despite similar symptom severity.’