McDonald’s is ditching plastic cutlery in favour of paper spoons, knives and forks across England and Wales – in move that could eliminate 858 TONNES of plastic each year

McDonald’s is axing plastic cutlery in favour of paper-based spoons, knives and forks across England and Wales.

The fast-food giant said it hopes the move will eliminate 858 metric tonnes of plastic each year.

The new cutlery is made from a recyclable and compostable pressed-paper that is certified by the Forest Stewardship Council (FSC).

It comes after the chain switched to the paper-based alternatives across restaurants in Scotland, Northern Ireland and the Republic of Ireland.

McDonald’s said it will now gradually roll out the new cutlery – including a renewable and compostable McFlurry spoon – across England and Wales from today. 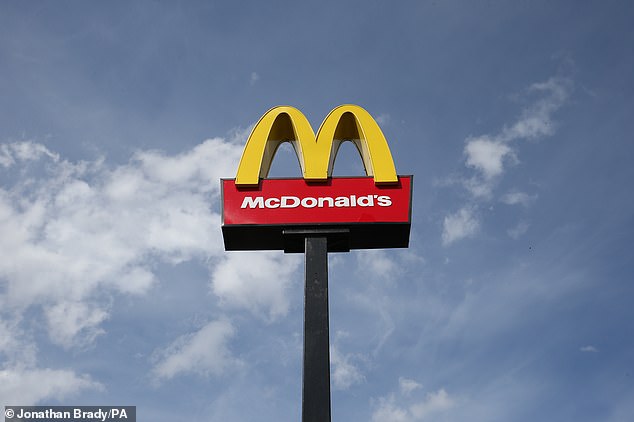 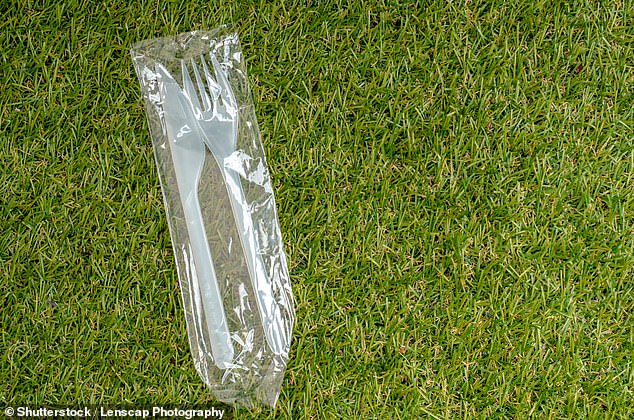 McDonald’s packaging accounts for half of England’s fast-food litter, a study reveals.

The charity picked up 75,551 items of rubbish, and found that the greatest proportion of litter came from McDonald’s, and was followed by Coca-Cola and Wrigley’s gum.

Nina Prichard, head of sustainable and ethical sourcing at McDonald’s, said: ‘As a business, we’re committed to taking action on packaging and waste and increasing our use of sustainable materials.

‘We’re pleased to announce another step forward in eliminating single-use plastics and it’s great to be switching our famous McFlurry spoons to this new paper-based material.’

The switch is part of the US-based firm’s sustainability strategy – Plan for Change.

This includes a goal to achieve net zero emissions across its UK and Ireland business by 2040, and globally by 2050.

Net zero means that its greenhouse gas emissions are removed from the atmosphere through reduction measures, such as planting trees or using technology like carbon capture and storage.

McDonald’s also set a target to ensure all its packaging is made from renewable, recycled or certified sources and is fully recyclable and compostable by 2024.

It has already introduced paper-based straws, new McFlurry cups without plastic lids, and developed salad boxes made from card.

McDonald’s is also already buying only renewable electricity for use in many of its restaurants, turning cooking oil into fuel for its delivery trucks and rolling out electric vehicle (EV) charge points.

It’s packed with environmentally-friendly features, such as wall art made from recycled polystyrene cups,  and kerb stones out of recycled plastic bottles.

The Drive-Thru lane is also made from recycled tyres and is permeable – meaning any rain that falls through gets collected underground and is used to flush the customer toilets.

Building cladding is made from recycled IT equipment like printers and computer monitors, as well as recycled white goods such as refrigerators and dishwashers.

Around 15 per cent of total power used comes from its own solar panels on the roof and two on-site wind turbines, while the rest is purchased and totally renewable.

To help keep in heat, McDonald’s has also used British sheep’s wool as a sustainable alternative to man-made building insulation, which is often made from plastic fibres.

External furniture including picnic benches is made from 100 per cent recycled plastic that is also recyclable. 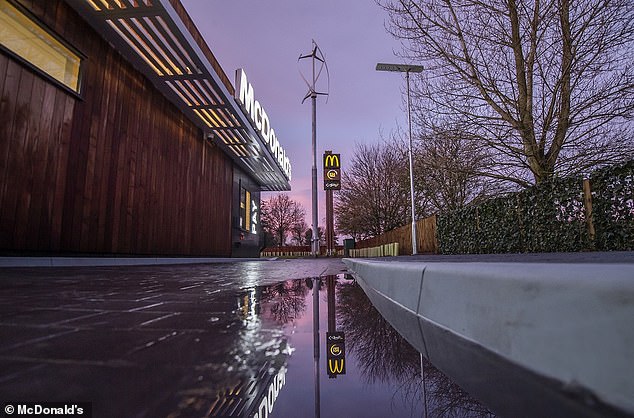 Last year, the UK’s first ever ‘net zero’ McDonald’s branch was opened in Market Drayton in Shropshire. Rainwater is collected at the Drive-Thru and used to flush toilets 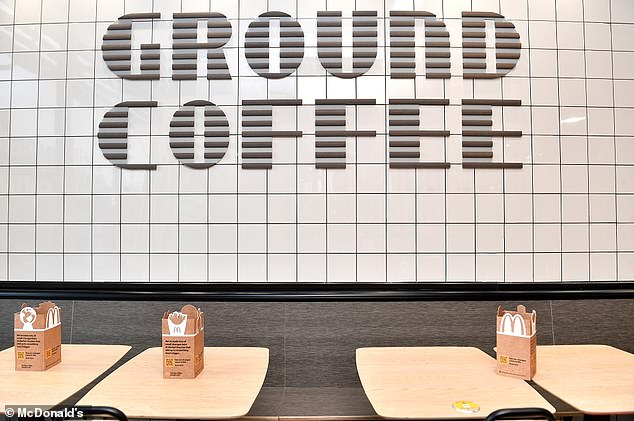 It’s packed with sustainable features, such as wall art made from recycled polystyrene cups and used coffee beans (pictured), and kerb stones out of recycled plastic bottles

McDonald’s said the new restaurant is ‘net zero’ in terms of its construction and operations, but admitted that items on the menu are not included in this classification.

Roughly 80 per cent of the company’s total emissions come from its supply chain, in particular its use of beef, chicken, dairy and other proteins.

Beef is said to be responsible for around 30 per cent of the its carbon footprint, and McDonald’s is one of the largest beef purchasers in the world.

Livestock farming contributes heavily towards climate change and, by some estimates, is responsible for 14.5 per cent of human-induced global greenhouse gas emissions.

This is because it involves converting forests into agricultural land to grow grain for animal feed, meaning carbon dioxide-absorbing trees are being cut down.

Around a third of all grain produced in the world is used to feed animals raised for human consumption.

Just one Big Mac is the equivalent of driving nearly eight miles in terms of carbon dioxide emissions, according to carbon calculator Plate Up For The Planet.

In 2021, McDonald’s told MailOnline it is committed to keeping beef on its menu provided it is sustainably sourced.

‘PLAN FOR CHANGE’: MCDONALD’S TIMELINE FOR A MORE ECO-FRIENDLY FUTURE

2024: McDonald’s UK & Ireland customer packaging will be made from renewable, recycled or certified sources and designed to be recyclable or compostable.

2025: McDonald’s UK & Ireland will be a market leader in vegan plant-based food, beginning with the recent launch of the 100 per cent vegan McPlant burger.

It will drastically cut the use of plastic in the more than 1 billion children’s toys it sells globally each year by the end of 2025.

2030: McDonald’s UK & Ireland will have helped one million people gain new skills and open doors to jobs. As part of this, McDonald’s UK&I will have supported 3,000 apprentices by 2025 and have introduced a youth worker into every UK restaurant by 2024.

McDonald’s UK & Ireland will aim to achieve net zero emissions for all its restaurants and offices.

2040: McDonald’s UK & Ireland will aim to achieve net zero emissions across its entire business by addressing all the ways it impacts the climate, and significantly reducing and removing greenhouse gas emissions.