McDonald’s will open its first ‘net-zero’ restaurant in the UK in Shropshire next month as part of its ambition to have a net zero carbon footprint.

The new branch, which is currently near to completion, will open on the western edge of Market Drayton and will be stocked with vegan plant-based food.

Customer packaging will be made from renewable, recycled or certified sources and designed to be recyclable or compostable.

The site will be a blueprint for other new-build McDonald’s in the future, according to the fast food giant, and is being built to a ‘UK industry net-zero emissions standard’.

McDonald’s, which currently operates around 1,300 restaurants across the UK, plans to slash carbon emissions across the country by 2040, it has also announced, as part of its ‘Plan for Change’ programme.

It wants to reach net zero emissions – meaning it emits no more greenhouse gases than it absorbs through its business – across the world by 2050, but in the UK and Ireland its net-zero target has been set a decade earlier. 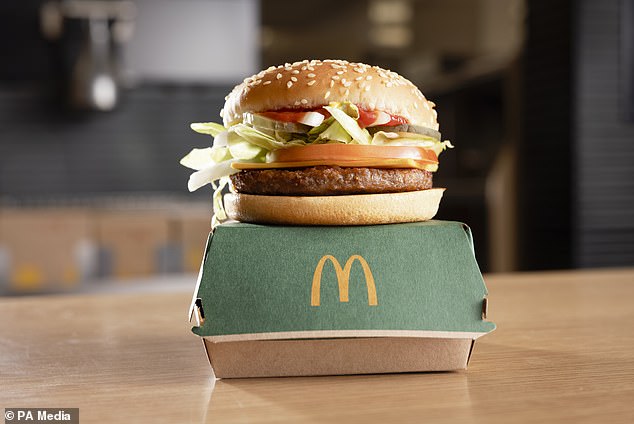 McDonald’s launched its first plant-based burger earlier this year. The new burger will be one of the options available at ‘net-zero’ restaurant 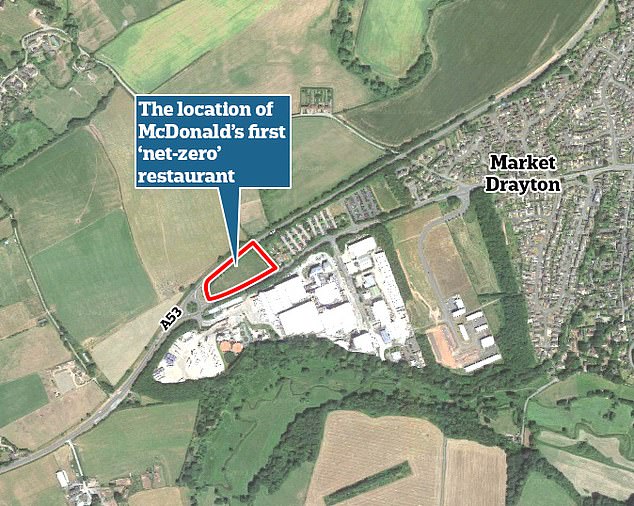 The first ‘net-zero’ McDonald’s restaurant in the UK is on the western edge of Market Drayton, on a patch of land between the A53 and Shrewsbury Road

WHAT IS NET ZERO CARBON?

Net zero refers to achieving an overall balance between emissions produced and emissions taken out of the atmosphere.

Net-zero organisations should be actively reducing their emissions aligned to a 1.5ᵒC science-based target in line with the Paris Agreement.

There will be some carbon emissions that cannot be eliminated with current technology, so to achieve net zero, it is essential that certified greenhouse gas removals are also in place.

The UK government says it is committed to ensuring emissions generated by the UK re offset by removing the same amount of carbon from the atmosphere.

There are two main ways this can be achieved – by planting more trees and by installing ‘carbon capture’ technology at the source of the pollution.

The new Market Drayton branch, dubbed its ‘greenest yet’, is on a patch of land between the A53 and Shrewsbury Road, close to business units owned by dairy product manufacturer Müller.

Construction started at in June, the Shropshire Star reported, after Shropshire Council cleared proposals in early 2020.

It will be stocked with McDonald’s first plant-based burger, called McPlant, which was released in the UK in September.

The Californian fast food company – which opened its first UK branch in Woolwich, south London, in October 1974 – also recently announced it will ramp up the amount of recycled or plant-based plastics in its Happy Meal toys.

‘Our Market Drayton restaurant is an exciting testing ground to put into practice what a net zero building, both in build and in use, looks like,’ said Gareth Hudson, construction director at McDonald’s.

‘From the materials used throughout the build process to how it’s powered, along with creating new areas of natural habitat to enhance the biodiversity of the site and local area, we’re bringing together skills and expertise from across McDonald’s and the partners we work with.’

McDonald’s wouldn’t reveal much about the specifics of the upcoming Market Drayton branch to MailOnline, including how exactly it will be different compared to a standard McDonald’s restaurant.

It did say that it will be serving both meat and plant-based food options, like all McDonald’s restaurants.

HOW DOES EATING MEAT AND DAIRY HURT THE PLANET?

Eating meat, eggs and dairy products hurts the environment in a number of different ways.

Cows, pigs and other farm animals release huge amounts of methane into the atmosphere. While there is less methane in the atmosphere than other greenhouse gases, it is around 25 times more effective than carbon dioxide at trapping heat.

Raising livestock also means converting forests into agricultural land, meaning CO2-absorbing trees are being cut down, further adding to climate change. More trees are cut down to convert land for crop growing, as around a third of all grain produced in the world is used to feed animals raised for human consumption.

As well as this, the nitrogen-based fertiliser used on crops adds to nitrous oxide emissions. Nitrous oxide is around 300 times more effective at trapping heat in the atmosphere. These fertilisers can also end up in rivers, further adding to pollution.

Overall, studies have shown that going vegetarian can reduce your carbon emissions from food by half. Going vegan can reduce this further still.

Currently, McDonald’s is one of the largest beef purchasers in the world. Roughly 80 per cent of its total emissions come from its supply chain, in particular its use of beef, chicken, dairy and other proteins.

Vegan alternatives to meat, such as those made by soy and even fungi, help the environment by cutting the amount of greenhouse gas emissions, which are notoriously generated by cattle.

Also at the Market Drayton branch will be eco-friendly furniture and packaging, including wooden outdoor play pens to replace the plastic ones currently found at branches around the world.

From 2023, all new furniture in McDonald’s sites will be made with recycled or certified materials, and will be designed to be recycled or reused when no longer needed.

Packaging will also be made with materials that are renewable, recycled or from certified sources by 2024. The goals are in line with the Science Based Targets initiative.

‘McDonald’s has a long history of taking action where it really matters to the communities we serve,’ said McDonald’s UK and Ireland chief executive Paul Pomroy.

‘But we are at a moment now where we need to accelerate our ambition and work even harder to look after each other and the planet.

‘This new plan for change is not just our sustainability strategy, it’s our business priority.

‘That means it isn’t a plan for one change, but for many – changes that together, with 1,400 restaurants, over 130,000 people, 23,000 British and Irish farmers and four million customers visiting every day, really will add up.’

McDonald’s is also part of the UN’s Race To Net Zero campaign to reach net-zero carbon emissions by the year 2050. 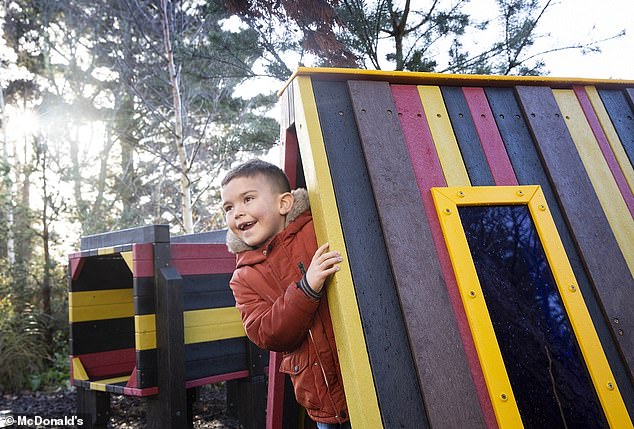 Also at the Market Drayton branch will be eco-friendly furniture and packaging, including wooden outdoor play pens to replace the plastic ones currently found at branches around the world

‘Having an iconic brand like McDonald’s join the hundreds of businesses across the UK that have signed up to the UN’s Race To Net Zero campaign is an exciting milestone,’ said MP Andrew Griffith, who has been appointed by the government to champion net-zero targets among British businesses.

‘I hope businesses across the UK will be inspired by their ambitious initiatives, helping us all to build back greener.’

McDonald’s said it is already buying only renewable electricity for use in its restaurants, turning cooking oil into fuel for its delivery trucks and rolling out electric vehicle charge points.

‘PLAN FOR CHANGE’: MCDONALD’S TIMELINE FOR A MORE ECO-FRIENDLY FUTURE

2021: McDonald’s UK & Ireland will launch its first restaurant built to a UK industry net zero emissions standard in Shropshire. When the restaurant opens in November, it will be a first for the UK industry and will act as a blueprint for future restaurants.

2024: McDonald’s UK & Ireland customer packaging will be made from renewable, recycled or certified sources and designed to be recyclable or compostable.

2025: McDonald’s UK & Ireland will be a market leader in vegan plant-based food, beginning with the recent launch of the 100 per cent vegan McPlant burger.

It will drastically cut the use of plastic in the more than 1 billion children’s toys it sells globally each year by the end of 2025.

2030: McDonald’s UK & Ireland will have helped one million people gain new skills and open doors to jobs. As part of this, McDonald’s UK&I will have supported 3,000 apprentices by 2025 and have introduced a youth worker into every UK restaurant by 2024.

McDonald’s UK & Ireland will aim to achieve net zero emissions for all its restaurants and offices.

2040: McDonald’s UK & Ireland will aim to achieve net zero emissions across its entire business by addressing all the ways it impacts the climate, and significantly reducing and removing greenhouse gas emissions.