Mexico City is SINKING: Land is depressing at an ‘unstoppable rate’ of up to 20 inches a year due to a dry lake bed under the city compressing and cracking

Mexico City is sinking at an ‘unstoppable’ with some parts decompressing up to 20 inches a year over the past decades.

A new report highlights centuries of pumping water from the aquifer under North America’s most populous city that has caused its foundation to compress at an alarming rate.

The city was built on what what was once Lake Texcoco and the lake bed acts as an infrastructure underneath the bustling travel destination.

However, the lake bed had become so dry that clay sheets are cracking and compressing, causing it to decompress.

If the rate of sinking continues,  it will end up contaminating drinking water for millions. 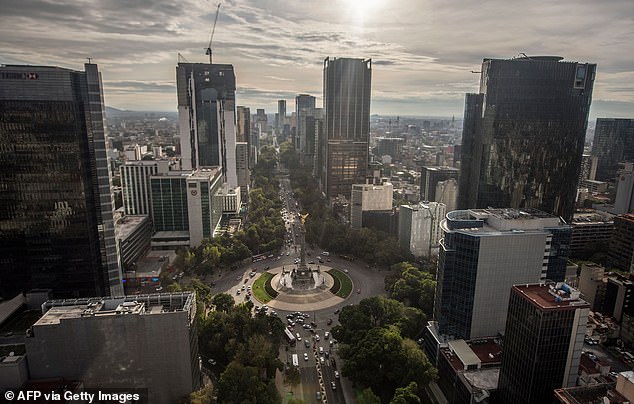 Metropolitan Mexico City is the largest city in North America, with a population of over 21 million people.

More than three-quarters of its drinking water comes from wells that extract water from the ground and continue to deplete the area’s aquifers.

Experts first noticed the city was sinking in 1900, when it was recorded at a rate of about 3.5 inches a year.

Drilling for groundwater wasn’t capped until the late 1950s, by which time Mexico city was sinking at a rate of 11 inches a year. 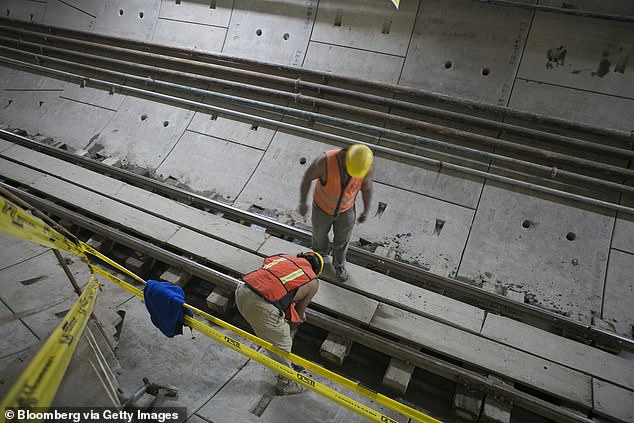 Completed in 2014, the Eastern Wastewater Tunnel in Mexico City is intended to help prevent flooding and the over-exploitation of groundwater resources

That slowed the rate of sinking, or subsidence, back to 3.5 inches a year but it didn’t stop the problem, which only worsened as the city’s population grew and development increased exponentially.

A new report published in the journal JGR Solid Earth indicates that parts of the city, including the historic downtown, are now sinking at a rate of up to 16 inches annually.

In some areas it’s even worse: the underdeveloped northeast has sunk 20 inches a year and experts say there’s no hope of reversing it.

Should the northeast become more industrialized, the situation there would only worsen.

Scientists from the US and Mexico analyzed more than a century of data, including more recent information from GPS and Interferometric Synthetic Aperture Radar (InSAR).

According to their findings, the level of subsidence in Mexico CIty is no longer even affected by how much water is being removed from the ground.

‘Instead, it reflects the steady compacting of the ancient lake bed on which the city was built,’ reports the American Geophysical Union.

A chart indicating Mexico City’s rate of shrinking, or subsidence, over the past 45 years and its impact on the aquifer beneath

Mexico City was built on what was once Lake Texcoco, home of the Aztec capital Tenochtitlán.

According to the AGU, centuries of water extraction have pushed the groundwater further underground, and the minerals in the dry lake bed have been repacking themselves tighter and tighter, ‘causing the ground to shrink and subside.’

The clay layers beneath Mexico City have been compressed by 17 percent, according to the report, and the subsidence ‘is almost fully irreversible.’

If water levels aren’t raised, the clay layers in the lake bed are expected to compress further, to 30 percent.

That would cause Mexico City to sink almost 100 feet more in the next 150 years.

But even if water levels are raised, the report said, ‘there is no hope for recovering the great majority of the lost elevation and the lost storage capacity of the aquitard.’

An aquitard is a zone that restricts groundwater flowing from one aquifer to another.

The sunken city is especially vulnerable to flooding from rain and spring water washing down the Sierra Madre mountains.

Those floodwaters could eventually pollute the groundwater, adding a drinking water shortage to the growing environmental catastrophe.

‘The stage is set for a dual water and subsidence crisis if no drastic water management actions are implemented,’ the researchers write.

completed in 2014, the Eastern Wastewater Tunnel is intended to help prevent flooding during the rainy season and stop the over-exploitation of groundwater resources.

Some experts suggest harvesting rainwater is a ‘viable and necessary’ solution to the city’s water crisis.

‘Harvesting rainwater offers a simple, practical, proven and inexpensive solution that could provide water for up to six months in areas such as homes and schools,’ Eduardo Vázquez, executive director of Mexico City water fund Agua Capital, told BNamericas.