Migratory birds have evolved to have lighter-coloured feathers to help them keep cool during their arduous journeys, study finds

Migratory birds have evolved to have lighter-coloured feathers to help them keep cool while flying over vast distances, a new study suggests.

Birds such as sanderlings and sandpipers fly thousands of miles every year to find the best ecological conditions and habitats for feeding, breeding and raising their young.

During these arduous journeys, they are often exposed to extreme weather conditions, and are at risk of overheating if they spend too long in direct sunlight.

However, new research from the Max Planck Institute for Ornithology in Germany shows that many migratory bird species have evolved to have pale plumage, which absorbs less heat than dark feathers.

This means the birds are less likely to overheat when exposed to sunshine for long periods of time. 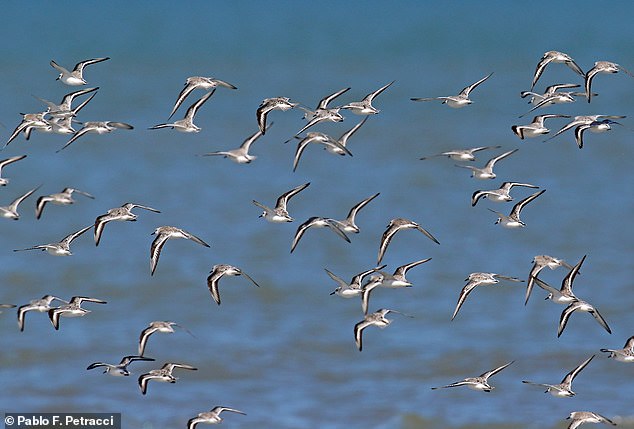 A flock of sanderlings (Calidris alba), a long-distance migratory shorebird, which may benefit from being lighter coloured to avoid overheating during migration.

Climate change may end winter migrations from Europe to Africa

The winter migration of birds southwards from Europe to Africa may become a thing of the past thanks to the impacts of climate change, a study has warned.

Many species are already spending up to an extra two months in their summer breeding grounds already, a team of researchers led from Durham University found.

They came to this conclusion after studying more than 50 years of trans-Saharan migratory bird sightings from both Gibraltar and The Gambia.

Among the affected species are some of Europe’s most common migratory birds — including Nightingales and Willow Warblers.

The team’s data suggest that these birds are able to survive longer in their European breeding grounds than before and may one day not need to migrate at all.

The findings show that birds are not just timing their migrations based on day length, but make nuanced decisions factoring in climate and vegetation availability.

It is estimated that some 4,000 bird species — around 40 per cent of the world’s total — undertake regular migrations.

At least 4,000 species of bird are regular migrants – representing about 40 per cent of the world’s total.

In far northern regions, such as Canada or Scandinavia, most birds move south to escape winter.

In temperate areas like the UK, about half the species migrate, including cuckoos, swifts and other insect-eaters that can’t find enough food.

The study, led by Dr Kaspar Delhey, of the Max Planck Institute for Ornithology in Germany, compared data on the plumage colour of different bird species with their migratory behaviour.

The researchers quantified overall plumage lightness for all species from zero to 100 – or black to white – using images from the Handbook of the Birds of the World.

They found that species that migrated over large distances had the lightest-coloured feathers, compared to those that migrated short distances or did not migrate at all.

‘We think lighter plumage coloration is selected in migratory species because it reduces the risk of overheating when exposed to sunshine.’

For example, nightingales and willow warblers, which migrate from Europe to Africa in the winter, have light brown and light green plumage, respectively.

Sanderlings, which are long distance migratory shorebirds, breed in the Arctic and visit the UK in the winter – benefiting from their grey and white hue.

White-rumped sandpipers make one of the longest migrations of any North American bird. They sometimes fly from Arctic Canada to winter in southern South America – covering 2,500 miles without a rest.

‘Lighter surfaces absorb less heat than darker ones, as anybody wearing dark clothes on a sunny day can attest,’ said Dr Delhey.

‘This would be particularly important for long-distance migrants that undertake extensive flights during which they cannot stop to rest in the shade.’ 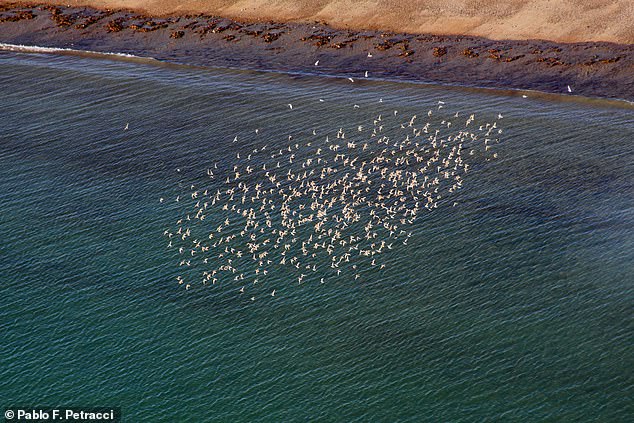 A flock of mainly white-rumped sandpipers (Calidris fuscicollis), a long-distance migratory shorebird, which may benefit from being lighter colored to avoid overheating during migration.

Dr Delhey said that the one of the biggest surprises was how consistent the effect was across different types of birds.

The researchers saw the same pattern in large and small species, and the same held true in waterbirds and land-dwelling birds too.

The findings provide more evidence that temperature and climate factors play an important role in shaping the evolution of animal coloration.

A previous study by Dr Delhey’s team revealed that lighter-coloured birds are found where temperatures are high and there’s little shade. This is because the birds’ lighter plumage helps to keep them cooler in the hot sun.

Other analyses also showed some birds fly at much higher altitudes during the day than at night.

‘Because flying at high altitude is likely costly, these changes required an explanation,’ said Dr Delhey.

‘One possibility was that flying higher, where it is colder, would offset the heat absorbed by the plumage when the sun was shining.’

Dr Delhey acknowledged that many factors influence bird colouration, and light colours are just one of many ways that migratory birds can avoid overheating.

However, in light of the new findings, he suggested that future studies should directly test how migratory species cope with thermoregulatory challenges.

The study was published on December 6 in the journal Current Biology.

WHY DO MIGRATING BIRDS FLY IN A V-FORMATION?

Birds fly in a v-formation to help them fly more efficiently, staying aloft while expending as little energy as possible.

Scientists learned the aviation secrets of migrating birds after attaching tiny logging devices to a flock of 14 northern bald ibises that not only tracked their position and speed by satellite but measured every flap of their wings.

The 14 birds used in the study were hand-reared at Vienna Zoo in Austria by the Waldrappteam, an Austrian conservation group that is re-introducing northern bald ibeses to Europe.

Birds fly in a v-formation to help them fly more efficiently, staying aloft while expending as little energy as possible (stock image)

The birds were studied as they flew alongside a microlight on their migration route from Austria to their winter home in Tuscany, Italy.

Lead researcher Dr Steve Portugal, from the Royal Veterinary College, University of London, said: ‘The distinctive V-formation of bird flocks has long intrigued researchers and continues to attract both scientific and popular attention, however a definitive account of the aerodynamic implications of these formations has remained elusive until now.

‘The intricate mechanisms involved in V-formation flight indicate remarkable awareness and ability of birds to respond to the wingpath of nearby flock-mates. Birds in V-formation seem to have developed complex phasing strategies to cope with the dynamic wakes produced by flapping wings.’

When flying in a V formation, the birds’ wing flaps were approximately ‘in-phase’, meaning all the wing tips followed roughly the same path, the scientists found.

This helped each bird capture extra lift from the upwash of its neighbour in front.

Occasional shifts of position within the formation meant that at times birds flew directly one behind the other.

When this happened, the birds altered their wing beats to an out-of-phase pattern to avoid being caught by downwash.