Millie Hughes-Fulford, NASA’s first female payload specialist, who conducted biomedical experiments on the physical toll of spaceflight on humans on board the space shuttle Columbia in 1991, died on Feb. 2 at her home in Mill Valley, Calif. She was 75.

The cause was cancer, her daughter, Tori Herzog, said. Dr. Hughes-Fulford had received a diagnosis of lymphoma in 2014, and cancer had recently been found in her esophagus.

Dr. Hughes-Fulford had aspired to fly to outer space since childhood. She achieved her goal on the Columbia in June 1991, eight years after Sally Ride, the first American woman in space, flew on the Challenger.

The experiments Dr. Hughes-Fulford conducted on the shuttle were only the start of her yearslong examination into the effects of weightlessness on the body’s immune system and bone mass.

In addition to her work over nine days aboard the Columbia, which carried the Spacelab laboratory, she oversaw experiments on five shuttle flights (four to the Russian Space Station Mir and one to the International Space Station) and on a Russian Soyuz and two SpaceX missions (all to the international station).

Fifteen of the 29 Apollo astronauts had infections in space or soon after they returned. In her experiments, Dr. Hughes-Fulford examined how microgravity, or weightlessness, caused the suppression of T cells, the white blood cells that lead the immunological fight against disease. 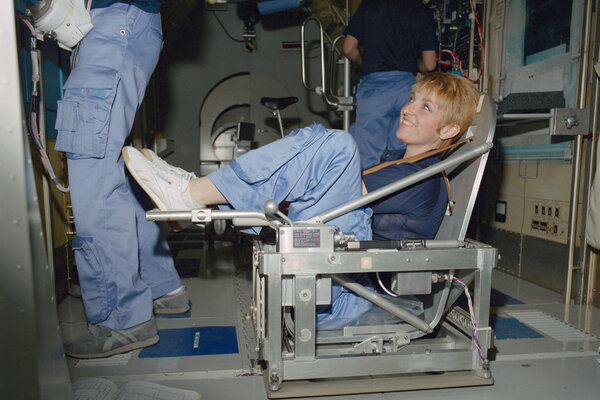 At the San Francisco VA Medical Center, where she worked for 47 years, she led a team of researchers that discovered that when there is no gravity, certain genes that activate T cells are greatly inhibited or do not switch on at all.

“There is a specific pathway that is not working in the absence of gravity,” Dr. Hughes-Fulford was quoted as saying in Science Daily in 2005. “You’re short-circuiting a whole lot of the immune response — namely, the ability to proliferate T cells — which shouldn’t be a surprise because life evolved in Earth’s gravity field.”

Her research carried the hope of helping to create treatments to decrease the immunosuppression of T cells, especially among older people.

“Millie was joyous about science,” Dr. Carl Grunfeld, associate chief of staff for research and development at the San Francisco VA Medical Center, said in an interview. “At one point during her illness, she proposed a different way to modify her chemotherapy and got a wonderful remission. When she told me about that, it was with the same joy about science as she had in the laboratory.”

Millie Elizabeth Hughes was born on Dec. 21, 1945, in rural Mineral Wells, Texas. Her father, Charles, owned a grocery store. Her mother, Lanore (Wilder) Hughes, was a homemaker. Later in life, both her parents became teachers.

At 5, Millie became infatuated with science fiction when she watched the early “Buck Rogers” television series. She admired the character Wilma Deering because she was a pilot — and because she wore pants at a time when Millie was always being told to wear a dress.

“And so I wanted to be Wilma Deering, because she could wear anything she wanted to, she flew a spaceship and was a professional woman,” Dr. Hughes-Fulford said in an interview for the Department of Veterans Affairs website in 2014.

Dr. Hughes-Fulford became a pilot and remained a science fiction fan, with strong devotion to the “Star Trek” television series and the “Star Wars” films, as well to the newest “Star Wars” attractions at Disney World, which she visited in 2019, her daughter said.

Recognizing that NASA’s missions in the 1960s and early ’70s were restricted to men, Dr. Hughes-Fulford became a scientist. She attended Tarleton State University (now a part of the Texas A&M University System) in Stephenville, where she graduated in 1968 with a bachelor’s degree in biology. She earned a Ph.D. in chemistry and biology from Texas Woman’s University in Denton in 1972.

As a postdoctoral fellow at the University of Texas Southwestern Medical School, she studied the regulation of cholesterol metabolism. She soon moved to the VA Medical Center, and she was working there when she spotted an advertisement in Family Circle magazine announcing NASA’s search for the first woman in space.

Dr. Hughes-Fulford found another route to space. She asked a colleague to apply for a NASA bone research grant that allowed him, once he received it, to pick two people as potential payload specialists. He chose her and himself, and in 1983 NASA named her.

But her scheduled mission was scrubbed after the Challenger exploded in January 1986, 73 seconds into its flight, killing all seven crew members.

Her flight, aboard the Columbia, finally lifted off in June 1991, about eight years after she was selected.

“When she went into space, it was like, ‘OK, let’s do this,’” her daughter said by phone. “It was originally supposed to be 19 months of training. When they went up, she was prepared for anything that could happen. She said her heart rate didn’t go up when they launched.”

Still, after sighting Earth, she was thrilled. “It looked alive to me,” she recalled to The Honolulu Star-Advertiser in 2014. “Imagine, looking at a living cell that has a glow to it. The entire Earth has a glow.”

Twelve years later, Columbia broke apart as it returned to the Earth’s atmosphere. Again, the entire crew was killed.

In 2006, Dr. Hughes-Fulford sent experiments to the International Space Station on a Soyuz spacecraft — resuming what had been lost when the Columbia was destroyed — in an incubator that included samples of T cells and a centrifuge to activate the cells. Once activated, the cells mimicked what happens when they are confronted with an infection, but some of the genes did not turn on in the weightless environment.

Dr. Hughes-Fulford, who had her own laboratory within the VA Medical Center, was also a professor in the department of biochemistry and biophysics at the medical school of the University of California, San Francisco.

In addition to her daughter, she is survived by two granddaughters and her sister, Gail Shewmake. Her husband, George Fulford, a commercial pilot, died in 2018. A previous marriage, to Rick Wiley, ended in divorce.

Dr. Hughes-Fulford’s outer space experimentation earned her an award from NASA in 2013 for her work on T cells.

She received the honor shortly before the SpaceX launch in April 2014, in which her tests examined the causes of decreased T cell activation in weightlessness.

“What we are looking for are new ways to regulate the immune system to help people on Earth,” she told the Veterans Affairs website. “It’s not just the four people who may go to Mars in 2025 (although it will help them, too); it’s about people on Earth, especially the elderly.”