Hikers were surprised on Thursday to find a frozen caveman beside the trails of a Minneapolis park, according to reports.

Artist Zach Schumack wanted to make use of the sculpture after having it in storage since it made a one-night debut at a marketing event. 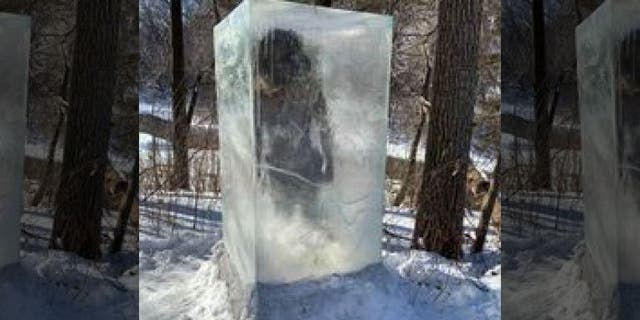 “Every day I would go to my garage and see this thing looking at me and it seemed like such a shame that this piece of art was just sitting there,” Schumack told FOX 9.

He created the piece after his friend was approached by local ad agency Hunter Adkins.

“I really like that it’s getting some attention because it’s getting people to get away from their TVs and computer screens,” he added. Schumack explained that he wanted to do something people could enjoy, so he and his friends planted the statue as a “prank.”

Schumack has gotten his wish as local residents have described the statue as a pleasant surprise.

“I don’t think anyone has ever seen anything quite like this,” Ellen Lasner told WCCO. “This is quite an art installation out in the middle of the woods.”

While he did not seem to have approval at first, Schumack’s piece has gained the support of the park board after the two sides struck an agreement.

The piece will remain in place until the snow melts.

Schumack also hinted that Zug Zug might have a “female companion” as well.