On July 20, 1969, Armstrong and Buzz Aldrin touched down at Tranquility Base, fulfilling President John F Kennedy’s goal of landing man on the Moon by the end of the Sixties and bringing an end to the Space Race. That “one small step for man” saw Washington and Moscow reach unimaginable feats of technology, but also tension, during one of the most important events of the Cold War. But while animosity between the two superpowers would continue until the fall of the Berlin Wall in 1989, the star of NASA’s Apollo 11 flight did not appear to feel the same.

Visiting the Yuri Gagarin Cosmonaut Training Centre (GCTC) in Star City, Moscow, Professor Brian Cox revealed during the BBC’s “Adventures in Space and Time” how an incredible piece of history has been preserved. 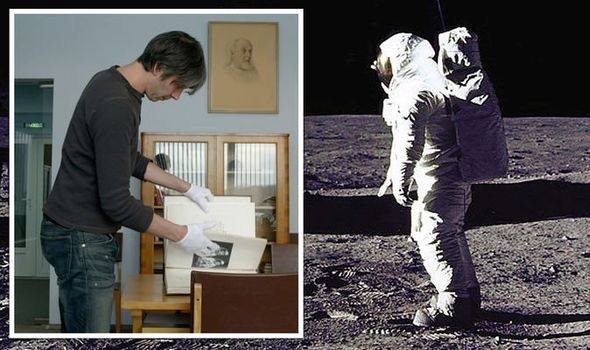 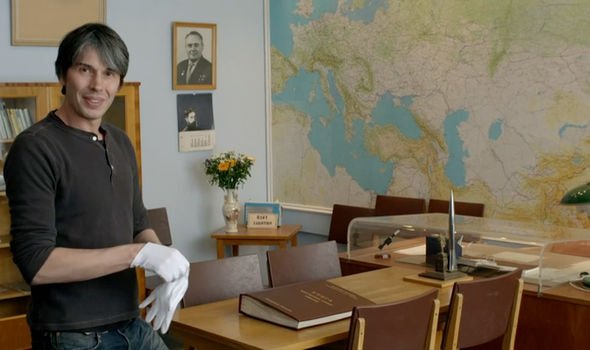 Shortly after returning from their historic mission, Armstrong and his Apollo 11 crewmates Michael Collins and Aldrin took a 38-day around the world Presidential Goodwill Tour, visiting 22 countries.

Between May 24 and June 5, 1970, Armstrong travelled to the Soviet Union, a country not on the goodwill tour’s itinerary, at the invitation of the USSR Academy of Sciences.

While the primary purpose of his visit was to give a talk at a conference in Leningrad (now St. Petersburg), Armstrong also travelled to Novosibirsk in western Siberia and to Moscow.

And his incredible contribution to the book was revealed by Prof Cox. 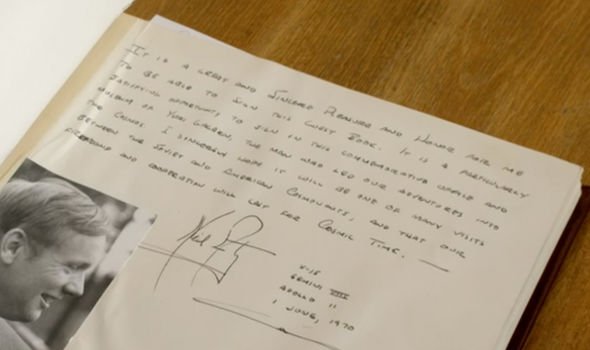 It reads: “It is a great and sincere pleasure and honour for me to be able to sign in this guest book.

“It is a particularly incredible opportunity to sign in this commemorative museum of Yuri Gagarin, the man who led our adventures into the cosmos.

“I sincerely hope it will be one of many visits between the Soviets and American astronauts and that our relationship and cooperation will last for cosmic time.”

His visit marked another step in the slowly warming relationship between the two space superpowers that ultimately led to the Apollo-Soyuz Test Project (ASTP) joint docking mission in July 1975.”

Valentina V. Tereshkova, the first woman in space, served as his hostess for his visit to Star City. 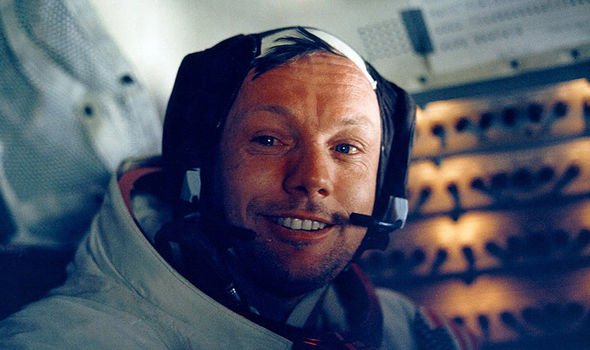 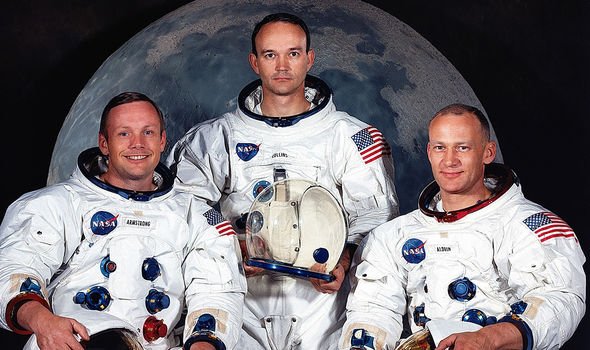 Armstrong met other cosmonauts as they showed him the Soyuz flight simulators and other training facilities and presented him with gifts such as a model of the Soyuz 4 and 5 spacecraft docked to each other. A

The NASA astronaut met the widows of Gagarin, who died in an aircraft crash in 1968, and Vladimir M.. Komarov, a cosmonaut who had been killed during the Soyuz 1 accident in 1967.

In a later press conference, Armstrong told reporters he had been “most emotionally moved” by meeting with them.

He added that he and Aldrin had left medallions on the lunar surface in honour of fallen astronauts and cosmonauts, including their husbands.

Armstrong’s visit marked a vital step in the slowly warming relationship between the two space superpowers that ultimately led to the Apollo-Soyuz Test Project (ASTP) joint docking mission in July 1975.