Home » Science » Most common age for having children is 27, study finds

Most common age for having children over the last 250,000 years is 27 – while fathers are consistently older than mothers, study finds

Scientists have discovered that, over the last 250,000 years, the most common age for becoming parents is 27.

It was also found that fathers were consistently older than mothers, with an average age gap of 7.5 years, according to the study from Indiana University.

A child’s DNA has between 25 and 75 genetic mutations that differentiate it from their parents’, and the types of mutations that occur depend on the parents’ ages.

The researchers used 25 million genetic variants in children with parents whose ages at conception were known to train a model to be able to predict parental age. 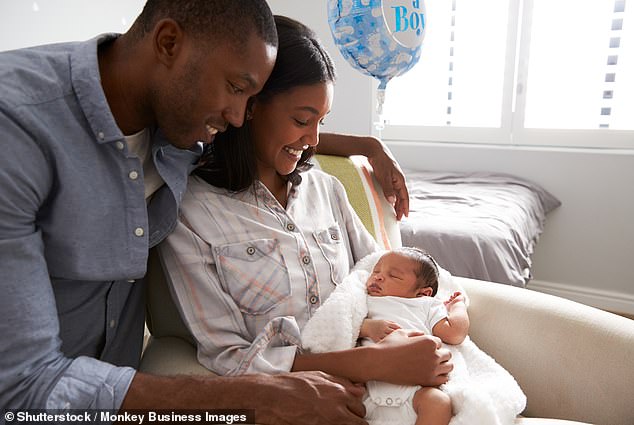 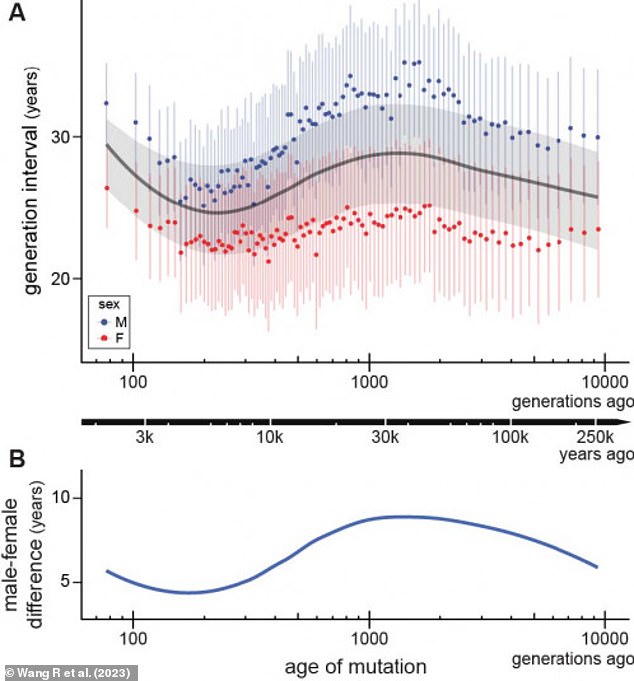 Generational information can provide insights into historical events, for example, when we migrated to new continents or bred with now-extinct human relatives. Pictured: Graphs showing the average age at conception for men versus women over the past 250,000 years

They then used this to see when new generations were born throughout history, to help increase understanding of the environmental changes that affected families.

‘Our genomes, the DNA found in every one of our cells, offer a kind of manuscript of human evolutionary history.

‘The findings from our genetic analysis confirm some things we knew from other sources – such as the recent rise in parental age – but also offer a richer understanding of the demography of ancient humans.

‘These findings contribute to a better understanding of our shared history.’

Generational information can provide insights into historical events, for example, when we migrated to new continents or bred with now-extinct human relatives.

The species of modern human, Homo sapien, first emerged about 300,000 years ago, but previous studies determining human generation times only look back at the past 45,000 years.

They do this by measuring how modern DNA has diverged from ancient samples, but averaged data across males and females.

For the new study, published in Science Advances, the Bloomington-based researchers wanted to look back further in time and separately estimate ages of maternity and paternity. 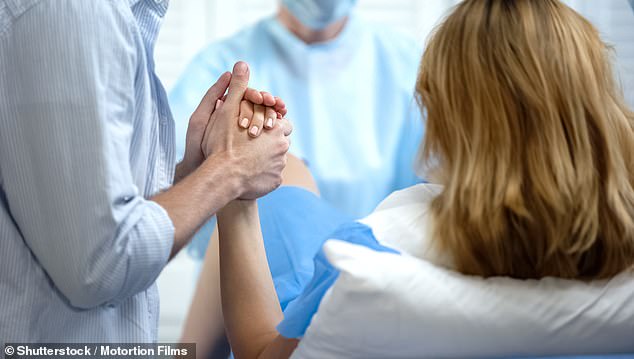 HOW DOES OUR DNA REVEAL OUR PARENTS’ AGES?

Every child inherits half their DNA from their mother and half from their father, but it also undergoes between 25 and 75 genetic mutations.

Through DNA analysis performed for other research, the scientists found that the type of mutations that emerged correlated with parental age.

Using ‘de novo’ mutations –  genetic alterations present for the first time in one family member – in children of parents whose ages at their conception are known, they created a model that could predict parental age from DNA.

Co-author Dr Matthew Hahn said: ‘Through our research on modern humans, we noticed that we could predict the age at which people had children from the types of DNA mutations they left to their children.’

They had noticed that a specific type of genetic mutation, known as ‘de novo’ mutation, was related to the ages of a child’s parents.

De novo mutations are genetic alterations present for the first time in one family member, and are the result of a mutation present in the egg or sperm, or that occurred during embryo development.

Using millions of de novo mutations in children with parents whose age at conception are known, the researchers modelled the relationship between the alteration and parental age.

‘We then applied this model to our human ancestors to determine what age our ancestors procreated,’ added Dr Hahn.

However, this age gap has been shrinking over the last 5,000 years, as the scientists found that today the average age a woman gives birth at has increased to 26.4 years.

The team also noted that parental age may have decreased to about 25 years about 6,400 years ago, ‘roughly concurrent with the historic rise of early civilisations’.

The researchers hope their model could be used to predict the effects environmental changes will have on future generations of humans.

Dr Wang said: ‘These mutations from the past accumulate with every generation and exist in humans today.

‘We can now identify these mutations, see how they differ between male and female parents, and how they change as a function of parental age.’

Scientists have revealed that a species of ancient human was bipedal 7 million years ago, but could also swing through the trees like a monkey.

Most interbreeding between humans and Neanderthals took place between North Africa and Iraq, a new study suggests.

Human footprints dating back 12,000 years have been discovered in the salt flats of a desert in Utah, USA.