As beautiful as they are mysterious, these images capture a blue ribbon of light which lit up a small Lapland village and left locals bemused.

Swedish skywatchers first thought the phenomenon was a strange kind of aurora, but as they continued to stare the blue light remained stationary, while the green aurora danced around it.

The village of Abisko is famed for having its own natural wonder in the form of a ‘blue hole’ – a patch of sky which extends from 3.8 to 7.7 square miles and remains clear irrespective of the weather conditions.

However, this blue light was different.

Experts rushed to find out what it could be and have since come to the conclusion that it may have been caused by a Russian submarine testing Intercontinental ballistic missiles.

The basis for this theory is that Moscow successfully test-fired a Bulava ballistic missile from the Russian nuclear-powered submarine Generalissimus Suvorov in the White Sea on the day the blue light was spotted on November 3. 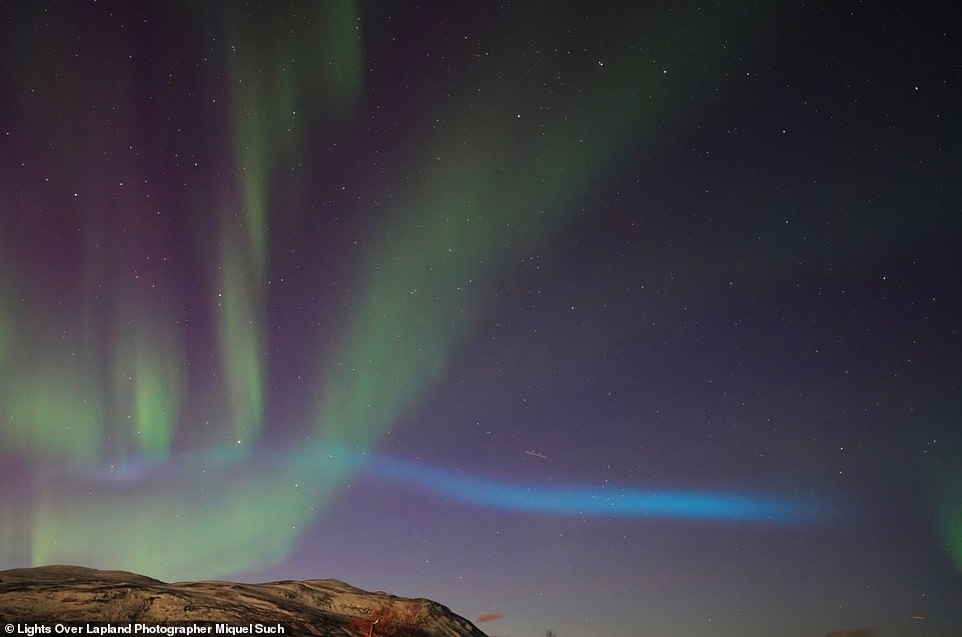 Strange: As beautiful as they are mysterious, these images capture a blue ribbon of light which lit up a small Lapland village and left locals bemused 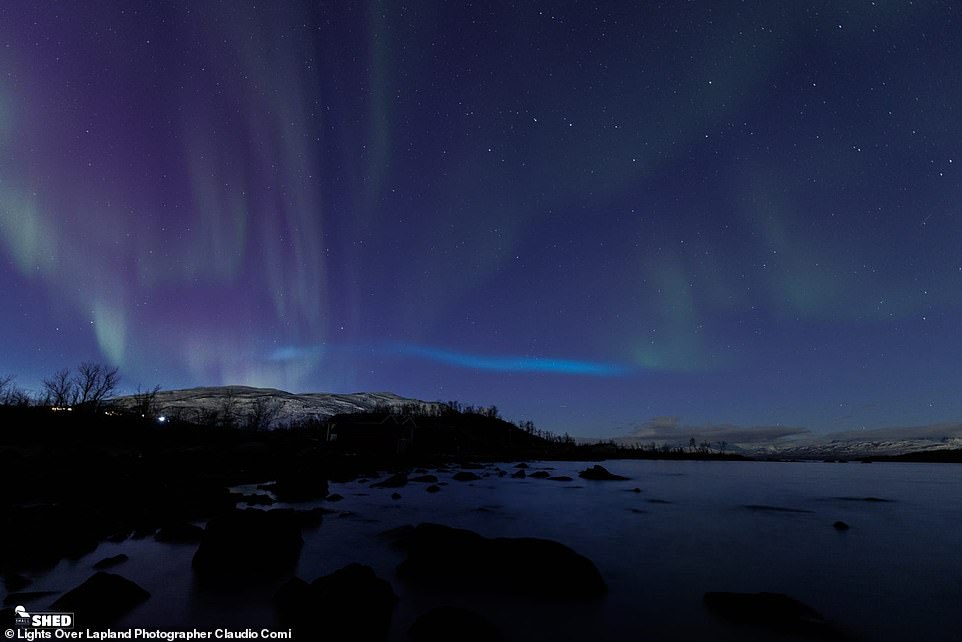 The village of Abisko is famed for having its own natural wonder in the form of a ‘blue hole’ – a patch of sky which extends from 3.8 to 7.7 square miles and remains clear irrespective of the weather conditions. However, this blue light (pictured) was different 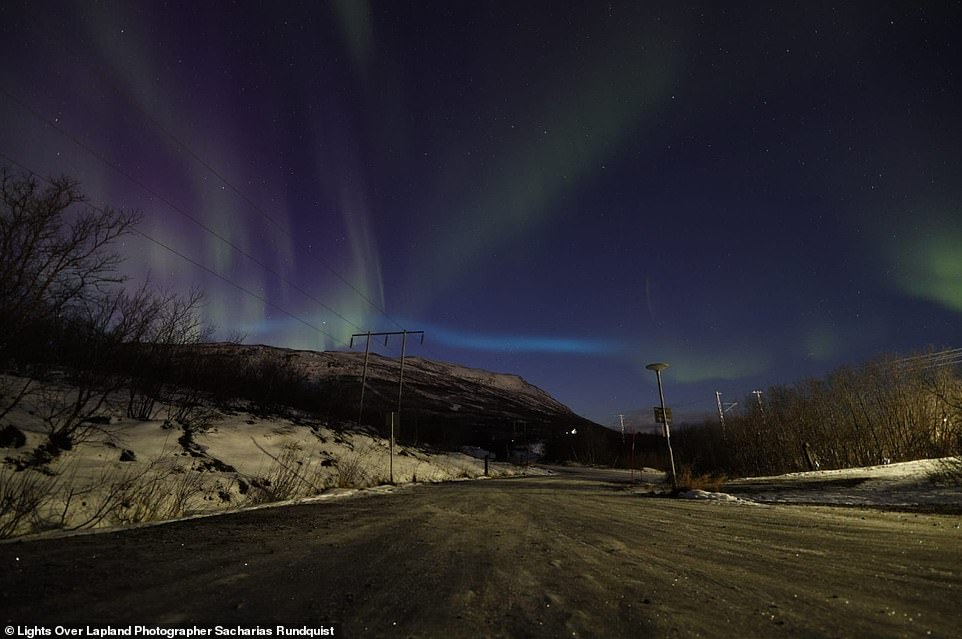 WHAT IS A BALLISTIC MISSILE?

An intercontinental ballistic missile (ICBM) is a long-range weapon used to deliver warheads to distant targets.

It is a type of ballistic missile, which are powered and guided toward a target but fall onto to it under gravity.

This means the trajectory of the missiles is a high, arching path.

To be classed as an ICBM, a missile must carry a warhead more than 3,400 miles (5,400km) either through the air, or through space.

Those that travel through space – which includes almost all nuclear missiles – are painstakingly designed to survive the heat and pressure of re-entry.

‘Our team of photographers has been photographing the night sky for more than a decade and this event was unlike anything we have ever seen,’ said Chad Blakley, the director of the aurora tour company Lights over Lapland.

It wouldn’t be the first time a missile test has been blamed for causing a bizarre aurora-like light show.

In 2017, similar blue ribbons were spotted in the skies above the Arctic Circle after Russia launched a number of missiles during a battle drill.

Auroras occur when particles from incoming solar storms strike gases in our planet’s atmosphere, with the collision often leading to these eye-catching displays.

The best vantage points for the natural wonder are in places in the far north such as Alaska, Canada, Iceland, Greenland, Norway, Sweden, and Finland.

On the other side of the planet, in the far south, places such as Tasmania and New Zealand also offer great views of an aurora.

The has been a recent increase in activity from the sun as a result of it coming towards the most active phase in its 11-year solar cycle — hitting peak activity in 2024.

Studies have shown that the level of solar activity currently happening, is about the same as it was 11 years ago, during the same point in the last cycle.

The ‘blue hole’ that Abisko is known for is caused by a little-known meteorological phenomenon.

It makes the village one of the best places in the world to consistently witness the Aurora Borealis.

‘The dominating wind direction in this area is from the west, which means that moist air masses from the Atlantic have to rise to higher (colder) altitudes to pass over the Scandinavian Mountains,’ explained Håkan Grudd, research support coordinator and deputy station manager of the Abisko Scientific Research Station.

‘When this happens, clouds form and the air loses moisture through precipitation. In Abisko, on the leeside of the mountains, the air is now drier and sinks to lower altitudes – clouds disintegrate, hence the ‘blue hole’.’

Abisko also draws tourists for another rare view – ‘moonbows’, which are also known as lunar rainbows and lunar halos.

These occur when moonlight reflects and refracts via water droplets and crystals near the blue hole.

They were introduced as a way to communicate to the general public the current and future space weather conditions and their possible effects on people and systems.

The scales have numbered levels, analogous to hurricanes, tornadoes, and earthquakes that convey severity.

Other systems: Pipeline currents can reach hundreds of amps, high frequency radio propagation may be impossible in many areas for one to two days, satellite navigation may be degraded for days, low-frequency radio navigation can be out for hours, and aurora has been seen as low as Florida and southern Texas (typically 40° geomagnetic latitude).

Power systems: Possible widespread voltage control problems and some protective systems will mistakenly trip out key assets from the grid.

Spacecraft operations: May experience surface charging and tracking problems, corrections may be needed for orientation problems.

Spacecraft operations: Surface charging may occur on satellite components, drag may increase on low-Earth-orbit satellites, and corrections may be needed for orientation problems.

Other systems: Intermittent satellite navigation and low-frequency radio navigation problems may occur, HF radio may be intermittent, and aurora has been seen as low as Illinois and Oregon (typically 50°geomagnetic latitude).

Other systems: HF radio propagation can fade at higher latitudes, and aurora has been seen as low as New York and Idaho (typically 55° geomagnetic latitude).

Other systems: Migratory animals are affected at this and higher levels; aurora is commonly visible at high latitudes (northern Michigan and Maine).