NASA’s Perseverance celebrated its 100th Martian day on Tuesday since the rover put its massive wheels in the dusty landscape of the Red Planet on February 18.

Perseverance, nicknamed Perky, has since hit a number of milestones that could not only help NASA find life, but also pave the way for humans to one-day walk on Mars.

These achievements include recording sounds on Mars, making oxygen using carbon dioxide in the atmosphere and sending back more than 75,000 pictures of the Martian world.

The car-sized vehicle also helped the US space agency fly the first powered drone, Ingenuity, on another world and is currently on a mission, exploring the Jezero Crater, to find signs of ancient microbial life. 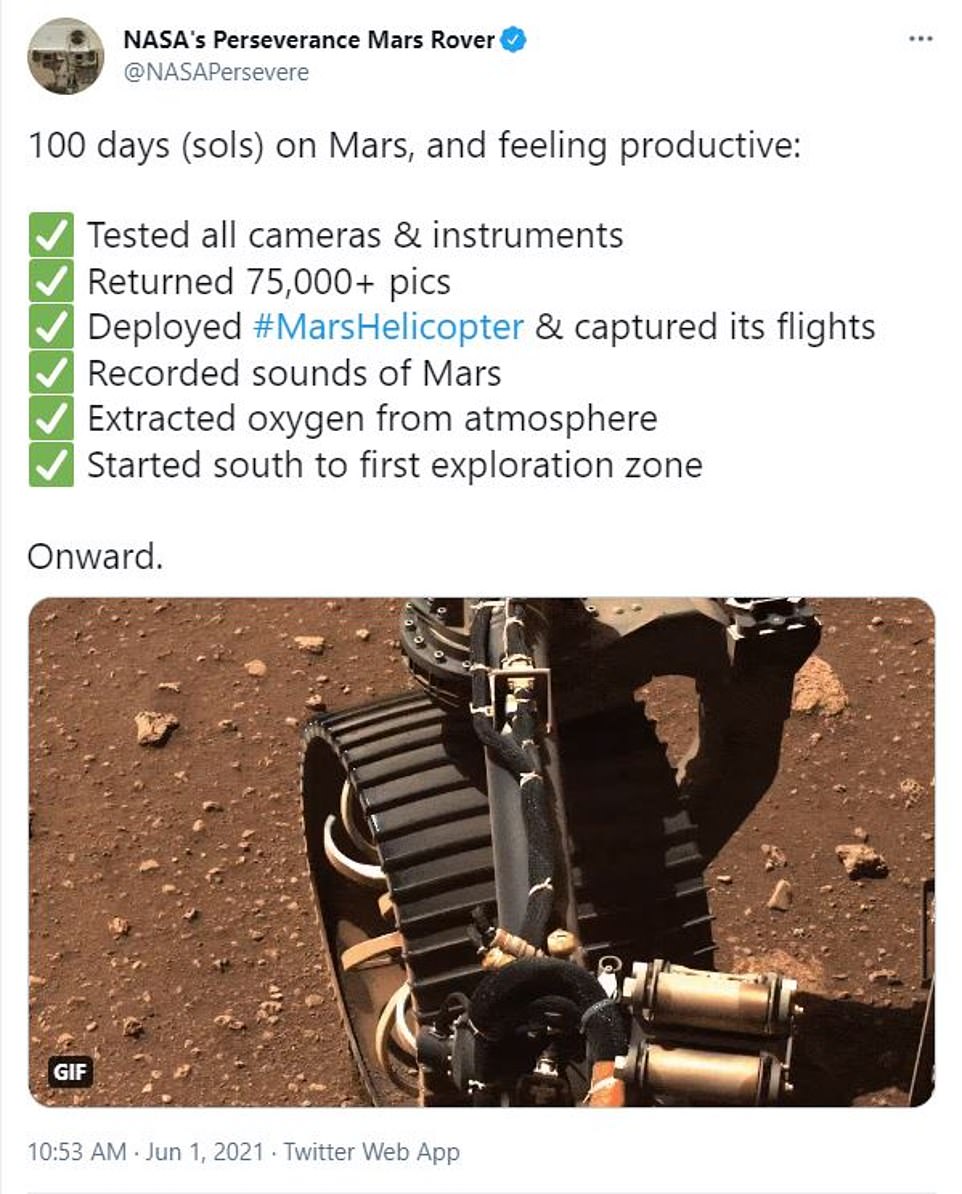 Perseverance embarked on its 239 million-mile journey to Mars on July 30, 2020 from Florida’s Space Coast facility.

Strapped atop an Atlas V-541 rocket, the rover and its travel companion, Ingenuity, took off from Launch Complex 41 at 4:50am ET.

NASA held a live briefing on February 18, as the world waited to learn if the rover and helicopter survived the ‘seven minutes of terror.’

This term is used to describe the tumultuous conditions that battered the craft as it entered the Martian atmosphere and approached the surface. 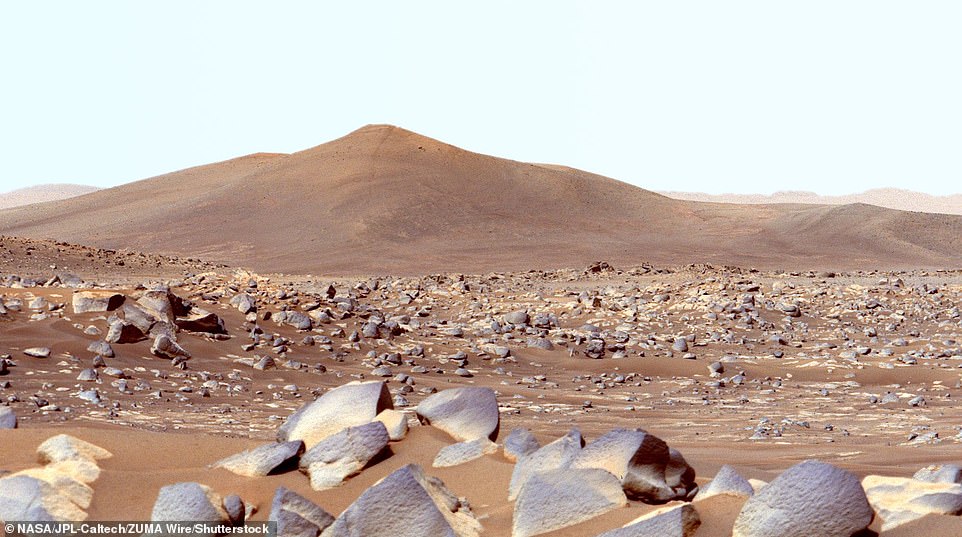 These achievements include recording sounds on Mars, making oxygen using carbon dioxide in the atmosphere and sending back more than 75,000 pictures of the Martian world. This image shows ‘Santa Cruz’ hill, which Perseverance took standing 1.5 miles away using its powerful cameras 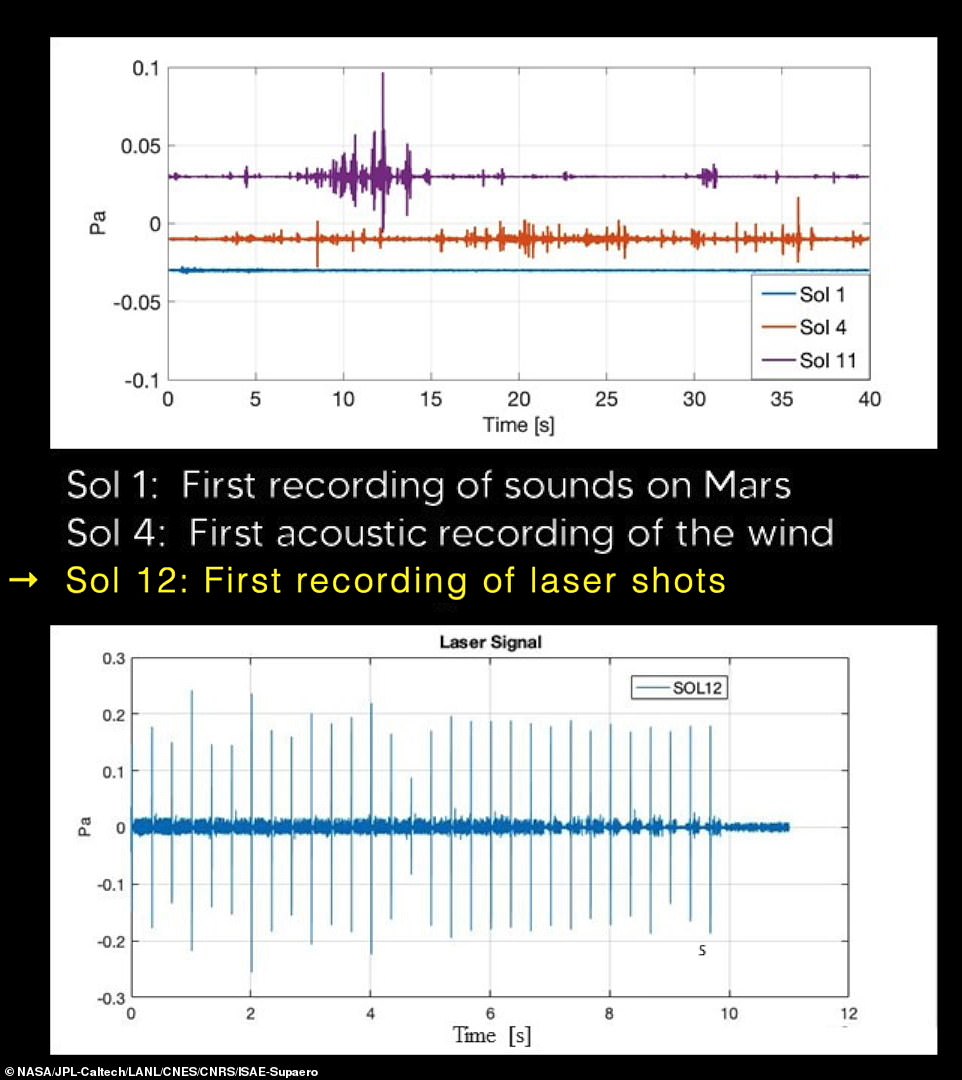 The sounds of 30 impacts can be heard during the audio recording, which were shot from the rover’s SuperCam instrument and captured by a microphone attached to the rover. Perseverance captured the eerie sound of a Martian breeze just two days after landing on Mars and about one month later, the world heard it fire the first lasers at rocks on the Red Planet

‘Touchdown confirmed! Perseverance safely on the surface of Mars, ready to begin seeking signs of past life,’ flight controller Swati Mohan announced to colleagues at the time.

Although landing on Mars was the rover’s first achievement, it was just the start of its mission.

The rover quickly went to work by testing its powerful equipment, including lasers attached to its SuperCam instrument and microphone.

Perseverance captured the eerie sound of a Martian breeze just two days after landing on Mars and about one month later, the world heard it fire the first lasers at rocks on the Red Planet.

The technology, located on the mast, releases pulses capable of vaporizing rocks from up to 20 feet away – and is a key component for investigating the Jezero Crater for signs of ancient life. 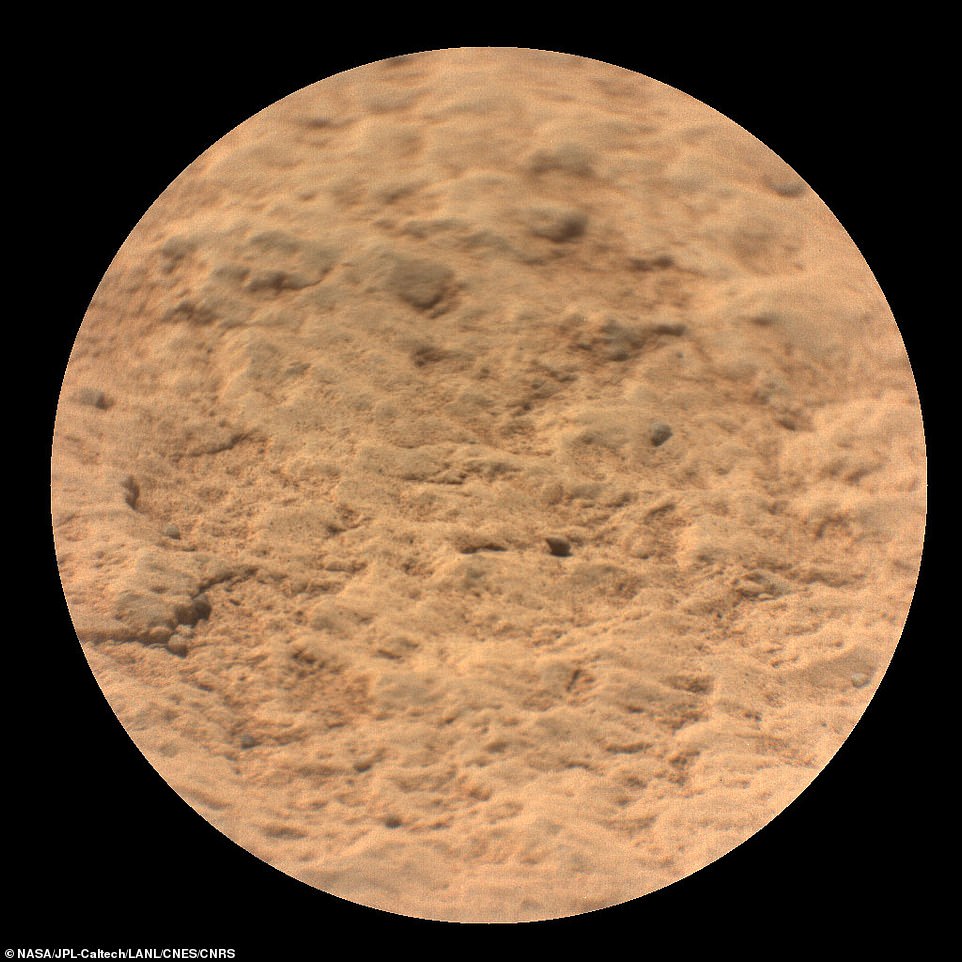 Perseverance chose the target Máaz, which is Navajo for ‘Mars,’ which sat 10 feet away from its location. NASA intercepted the pulses for a further analysis that determine the rocks were mostly volcanic

Perseverance eyed an area 10 feet away, shot its laser and the ground team was able to analyze the target’s composition that proved to be mostly volcanic rocks.

During this time, the rover was safeguarding the Ingenuity helicopter in its belly, waiting for the right place to drop the drone for it to start its own mission.

Shortly after providing the world with sounds from Mars, Perseverance gave us the first look of Ingenuity when it dropped helicopter from its belly on April 4 ahead of its maiden flight.

In the early hours of April 18, Ingenuity became the first craft to complete a powered flight on another planet and has since flown six times. 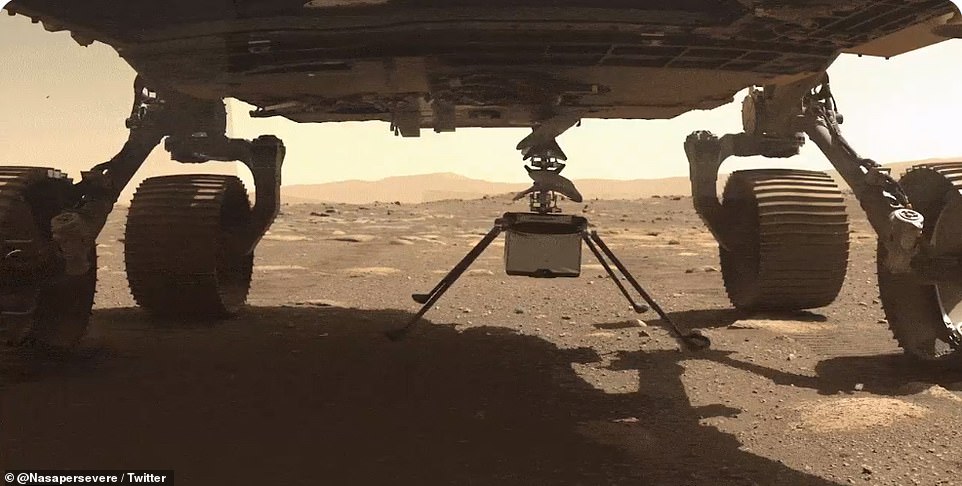 Shortly after providing the world with sounds from Mars, Perseverance gave us the first look of Ingenuity when it dropped helicopter from its belly on April 4 ahead of its maiden flight. 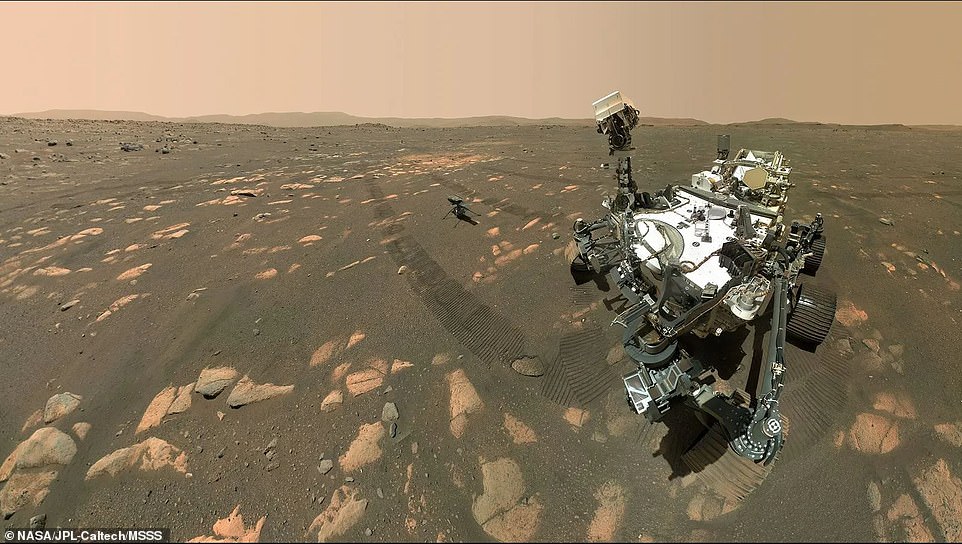 Perseverance snapped a ‘selfie’ of it and Ingenuity on April 6. Moments later the rover rolled away from the helicopter, which was set to make its first flight on Mars 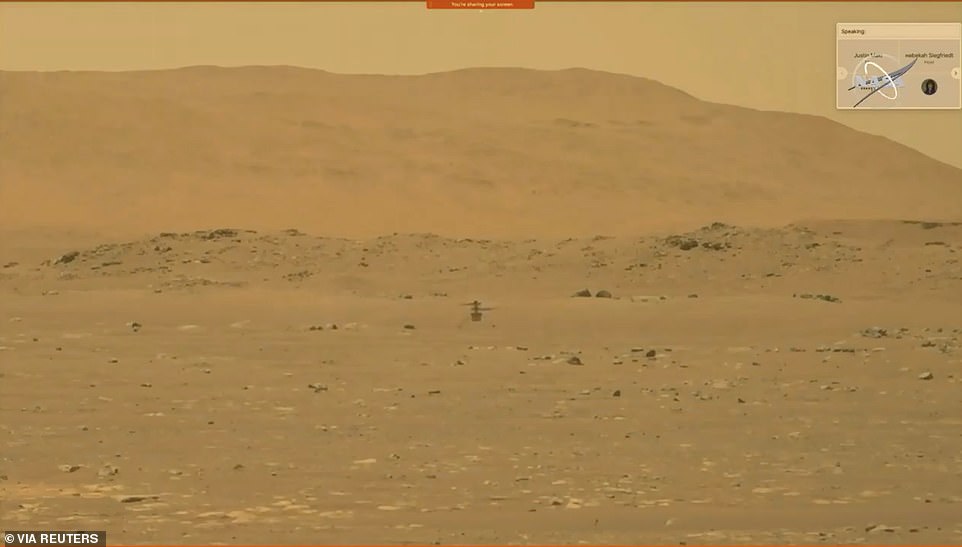 In the early hours of April 18, Ingenuity became the first craft to complete a powered flight on another planet and has since flown six times.

And just like a proud parent, Perseverance has stood back and watched its travel companion lift off the ground each time.

The rover captured footage of each flight that provides NASA with a trove of data and ability to better understand Mars’ thin atmosphere.

However, what many deem the most important milestone was Perseverance successfully making oxygen from carbon dioxide in Mars’ thin atmosphere. 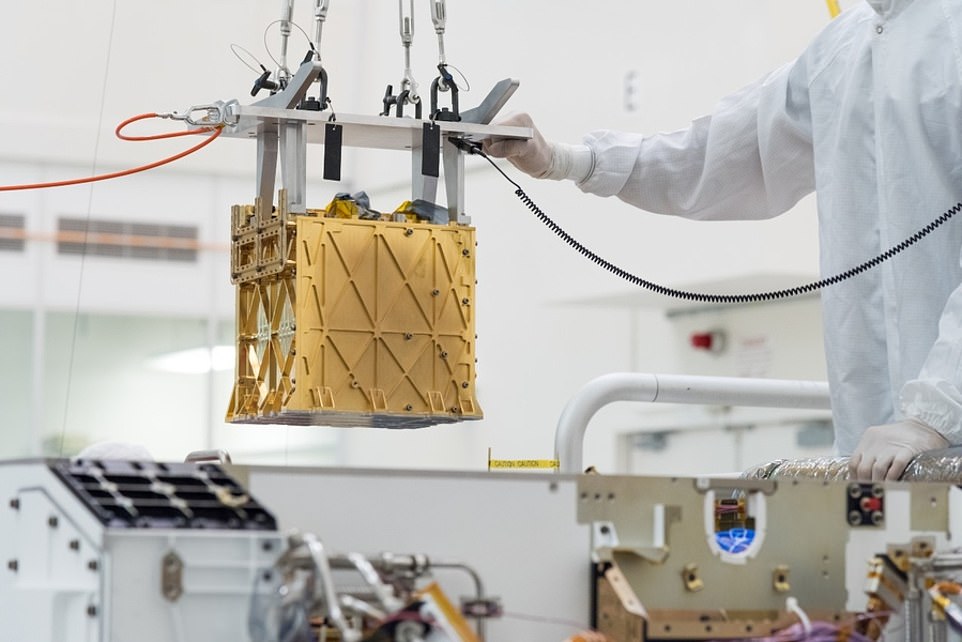 There are 23 cameras mounted to the Perseverance rover including:

The engineering cameras give detailed information in colour about the terrain the rover has to cross.

They measure the ground for safe driving, check out the status of hardware and support sample gathering.

There are Hazcams for hazard detection and Navcams for navigation.

Science cameras record in more detail and can even capture 3D images.

The Mastcam-Z on a 2 metre arm has a zoom feature for focusing on distant objects and can film video.

The Supercam fires a laser at mineral targets beyond the reach of the rovers arm to analysed the chemical composition of the rock.

MOXIE, or the Mars Oxygen In-situ Resource Utilization Experiment, produced 5.4 grams of oxygen in an hour by pulling in CO2 and converting it to the life giving chemical during its first test on the Red Planet.

This version is capable of producing up to 12g of oxygen per hour, or about 288g per day. Astronauts on the ISS consume an average of 840g of O2 every day.

One of the rover’s most recent accomplishments is using its robotic arm to begin conducting science experiments.

On May 11, NASA announced Perseverance began studying the floor of Jezero Crater, which is said to have been a lake around three billion years ago.

A camera called WATSON on the end of the rover’s robotic arm has taken detailed shots of the rocks, with extra data coming from a pair of zoomable cameras.

Now that Ingenuity has moved from a technical demonstration, to taking up the new role as a scout for Perseverance, the ‘science can begin,’ the agency explained.

Using its suite of cameras, Perseverance has been taking images of rocks on the floor of the crater, which was once a lakebed billions of years ago.

What insights they turn up will help scientists create a timeline of when an ancient lake formed there, when it dried and when sediment began piling up in the delta that formed in the crater long ago.

Understanding this timeline should help date rock samples – to be collected later in the mission – that might preserve a record of ancient microbes.

A key objective for Perseverance’s mission on Mars is astrobiology, including the search for signs of ancient microbial life.

The rover will characterize the planet’s geology and past climate, pave the way for human exploration of the Red Planet, and be the first mission to collect and cache Martian rock and regolith (broken rock and dust).

Subsequent NASA missions, in cooperation with ESA (European Space Agency), would send spacecraft to Mars to collect these sealed samples from the surface and return them to Earth for in-depth analysis.