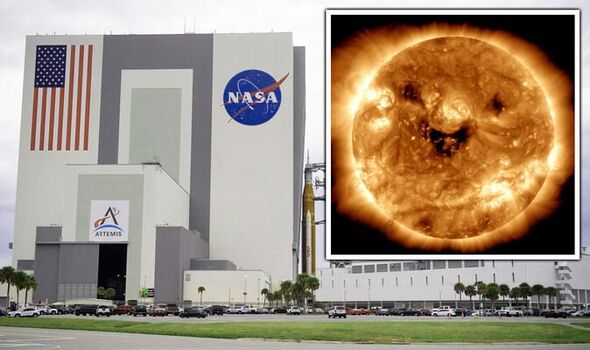 A cheerful photograph released by NASA shows the moment scientists caught the Sun “smiling” for the camera. In an image taken by the space agency’s Solar Dynamics Observatory (SDO) on Wednesday the celestial body appeared to be in a good mood.

“Seen in ultraviolet light, these dark patches on the Sun are known as coronal holes and are regions where fast solar wind gushes out into space.”

The NASA SDO was launched on February 11, 2010, and remains in orbit around the Earth as it observes the Sun.

During its operational lifetime, the SDO has recorded the many changes and fluxes on the Sun’s surface.

The dark spots caught on camera this week are caused by solar winds heading out into space.

On Earth we see the effects of discharge from the Sun in the form of the glowing North and Southern Lights.

The greenish glow created by the aurora borealis is created by charged plasma particles from the Sun hitting the Earth’s protective magnetic field.