Home » Science » NASA Says an Asteroid Will Have a Close Brush With Earth. But Not Until the 2100s.

An asteroid the size of the Empire State Building has a slight chance of hitting Earth.

Don’t worry. You’ll long be dead before that has any chance of happening. So will your children. Probably all of your grandchildren, too.

At a news conference on Wednesday, NASA scientists said there was a 1-in-1,750 chance that an asteroid named Bennu, which is a bit wider than the Empire State Building is tall, could collide with Earth between now and 2300.

That is actually slightly higher than an earlier estimate of 1 in 2,700 over a shorter period, between now and 2200.

“It’s not a significant change,” said Davide Farnocchia, a scientist at the NASA Jet Propulsion Laboratory in California and lead author of a paper published in the journal Icarus. “I’m not any more concerned about Bennu than I was before. The impact probability remains really small.”

In any case, the trajectory of Bennu is known precisely enough that the chances of collision are exactly zero for the next century. But the crystal ball becomes fuzzier in 2135. In that year, Bennu will still miss Earth, but it will come pretty close, to within 125,000 miles or so, or about half the distance from the Earth to the moon.

The exact distance becomes crucial, because Earth’s gravity will slingshot Bennu as it passes. If it passes by at a particular distance at a certain time — what planetary scientists call a “gravitational keyhole” — then it will be sent on a trajectory that could indeed intersect with Earth about half a century later. 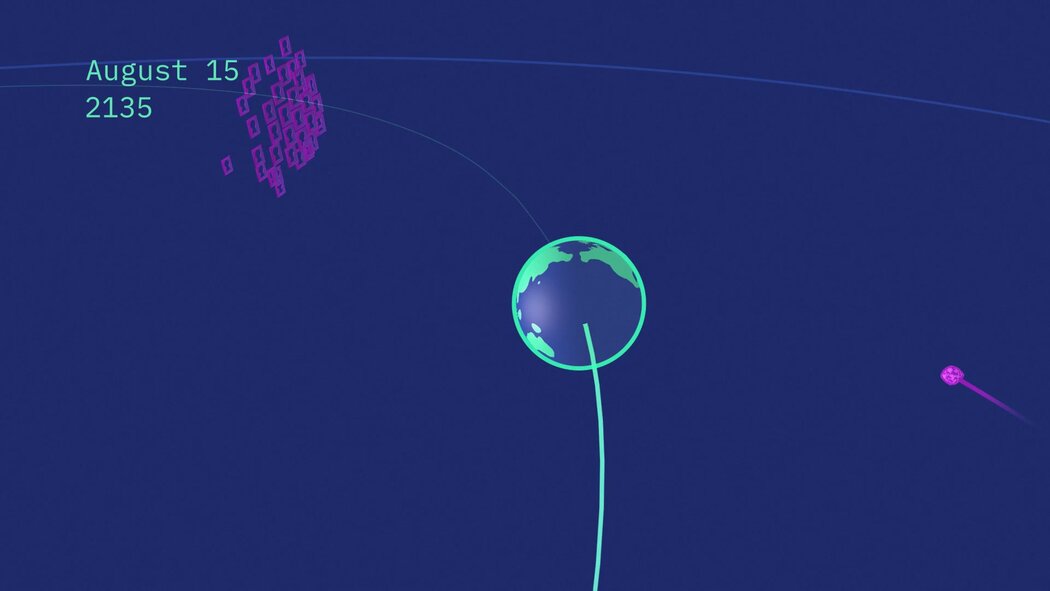 The most worrisome day would be Sept. 24, 2182, but there would be only a 0.037 percent chance of its being a bad day. Bennu is about a third of a mile, or half a kilometer, wide. That is not nearly large enough to cause a planetwide extinction, but it could inflict a sizable swath of devastation.

“You can usually, by rule of thumb, say the crater size is going to be 10 to 20 times the size of the object,” said Lindley Johnson, the planetary defense officer at NASA. “So a half-kilometer-sized object is going to create a crater that’s at least five kilometers in diameter, and it can be as much as 10 kilometers in diameter. But the area of devastation is going to be much, much broader than that, as much as 100 times the size of the crater. So an object Bennu’s size impacting on the Eastern Seaboard states would pretty much devastate things up and down the coast.”

The improved probabilities come courtesy of NASA’s OSIRIS-REX spacecraft, which spent two years studying Bennu up close. The spacecraft left Bennu three months ago and is now headed back toward Earth to drop off samples of rock and dirt it collected from the asteroid for detailed laboratory study by scientists.

When the spacecraft was in orbit around Bennu, Dr. Farnocchia and his colleagues were able to precisely pin down the asteroid’s orbit. This let them improve the estimate of Bennu’s position in 2135 by a factor of 20.

OSIRIS-REX’s observations also enabled calculations of the small forces imparted on Bennu caused by the heating and cooling of the surface.

Mission managers chose Bennu in part because it appears to be laden with the types of carbon molecules that may have provided the building blocks of life on Earth. But they also chose it in part because Bennu is what is known as a near-Earth asteroid. Its orbit crosses Earth’s, and as soon as it was discovered in 1999, planetary scientists could see that it posed a potential danger to our planet.

But a greater danger could come from the asteroids not yet seen. Dr. Johnson said about 40 percent of the near-Earth asteroids the size of Bennu remain to be found.

If an asteroid appeared likely to collide with Earth, humanity could try to deflect it into an orbit that misses the planet. NASA is to conduct an experiment using this technique with an asteroid called Didymos in 2022, sending the Double Asteroid Redirect Test spacecraft to nudge it off its orbit. The spacecraft is lined up to launch later in the year.

Dr. Johnson said if there were decades of advance warning, such a deflection would work for an errant asteroid the size of Bennu, although it would take multiple impactors.