‘The dawn of a new era in astronomy: NASA shared epic space images in 2022 that captured the birth of stars, Jupiter’s powerful storms and swirling iridescent sands on Mars

This year was the dawn of a new era in astronomy.

The world was captivated by stunning images of stars birthing from fiery clouds, violent storms flowing throughout Jupiter and iridescent sands swirling across the barren landscape of Mars.

Scientists spent much of 2022 sifting through mountains of data from NASA’s James Webb Space Telescope (JWST) and uncovered never-before-seen cosmic wonders that formed in the early universe.

One of the epic images includes the oldest galaxy that formed 13.5 billion years ago – when the universe was just 350 million years old. 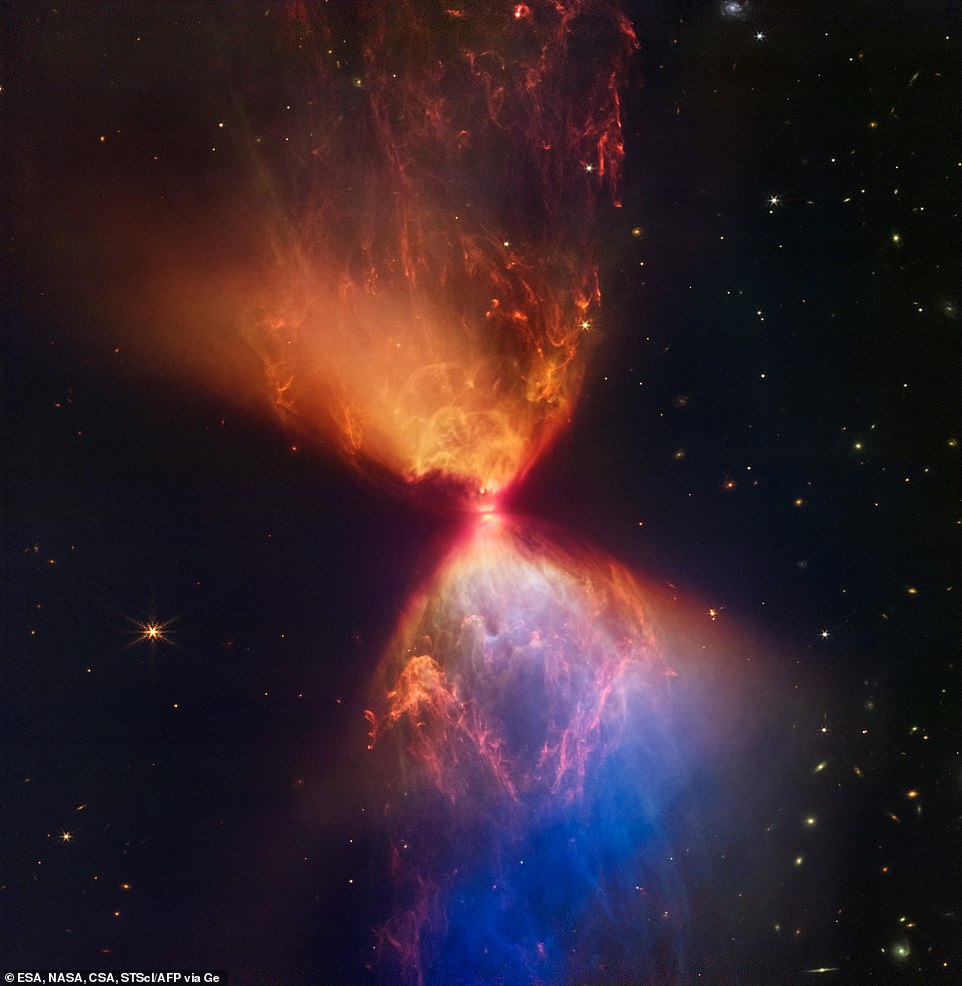 A star is born: NASA’s James Webb Space Telescope captured the ‘once-hidden’ beginnings of a very young star during its exploration to find the first galaxies. The telescope was able to ‘see’ the once invisible dust and clouds surrounding the region and in the center of the hourglass is the young star collecting surrounding material to help it grow

JWST also shared a stunning look at the star-forming region called NGC 3324 in the Carina Nebula, revealing a landscape of ‘mountains’ and ‘valleys’ of gas and dust.

Juno, NASA’s probe tasked with investigating Jupiter, snapped images of violent cyclones on the gas giant that look like they were created by a brush swooshing paint on a canvas.

And while the Red Planet may be known as a wasteland, the American space agency’s Mars Reconnaissance Orbiter spotted ripples of sand that appear to be dancing through a Martian crater.

NASA Administrator Bill Nelson said in a statement this month: ‘2022 will go down in the history books as one of the most accomplished years across all of NASA’s missions.

‘There’s so much to look forward to in 2023 too: More stunning discoveries from Webb telescope, climate missions that will tell us more about how our Earth is changing, continued science on the International Space Station, groundbreaking aeronautics developments with the X-59 and X-57 experimental aircraft, the selection of the first astronauts to go to the Moon in more than 50 years, and more. Space is the place and NASA proves humanity’s reach is limitless!’ 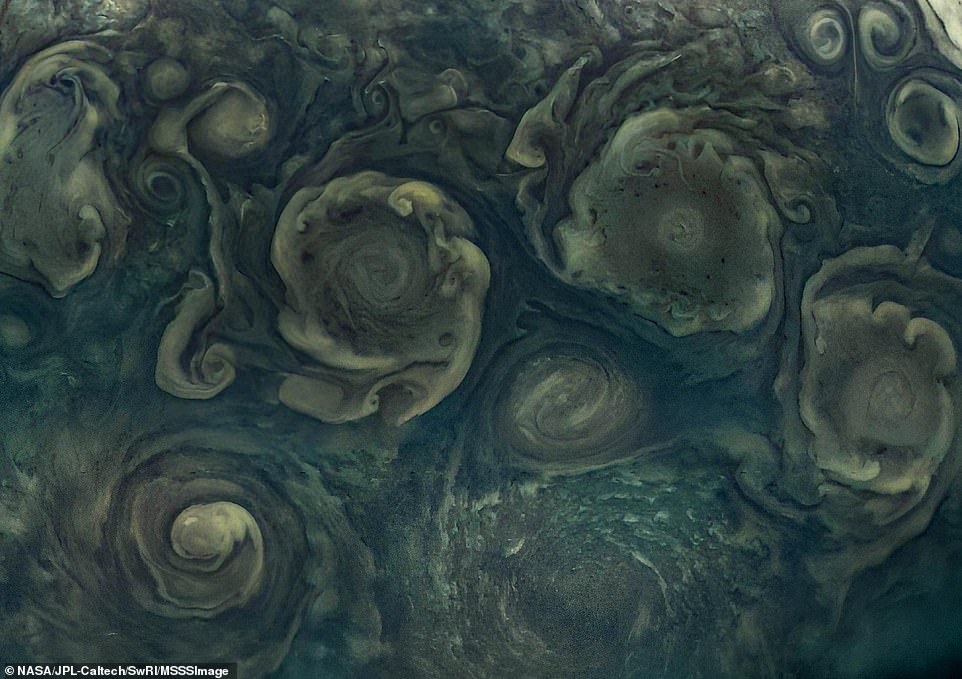 A true work of art: Juno captured colossal cyclones at Jupiter’s north pole, similar to hurricanes on Earth – but move five times faster. This image was snapped in September and looks more like an oil painting than a photograph of a distant planet 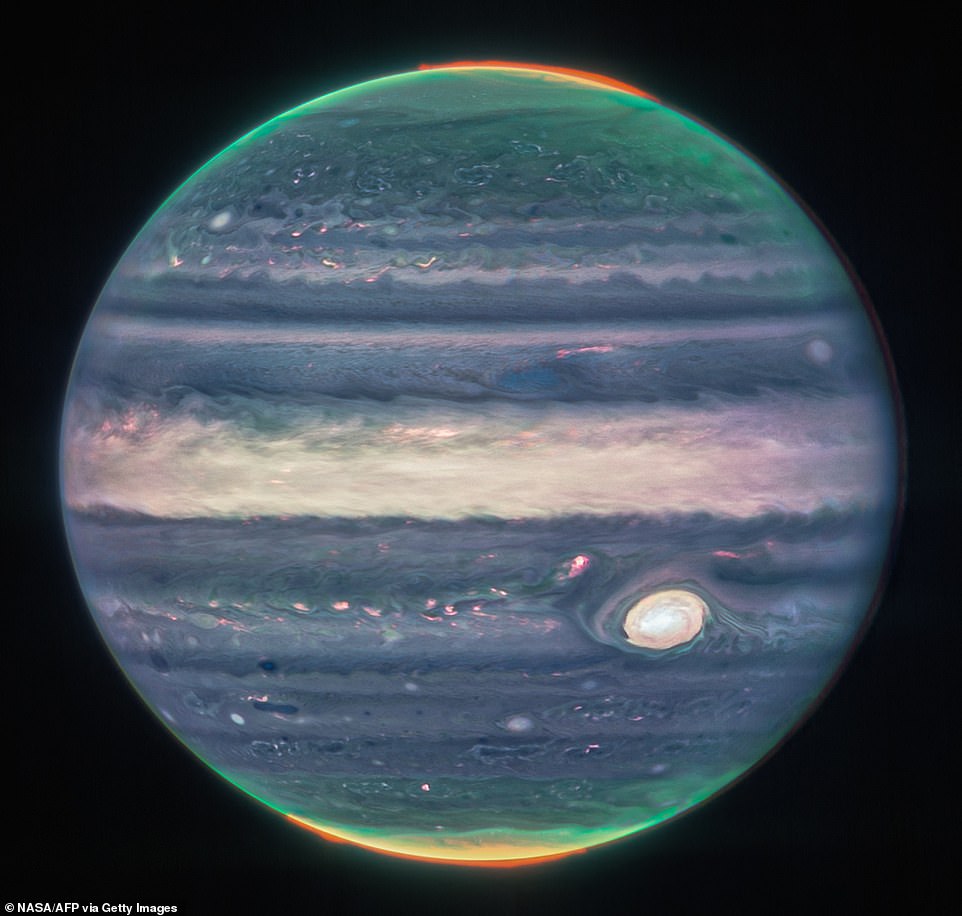 A real beauty: JWST shared new images of Jupiter in 2022 that capture its stunning auroras  glowing at the gas giant’s north and south poles. The auroras are caused by fluctuations in the planet’s magnetic field. As Jupiter rotates, it drags its magnetic field bombarded by particles of solar wind 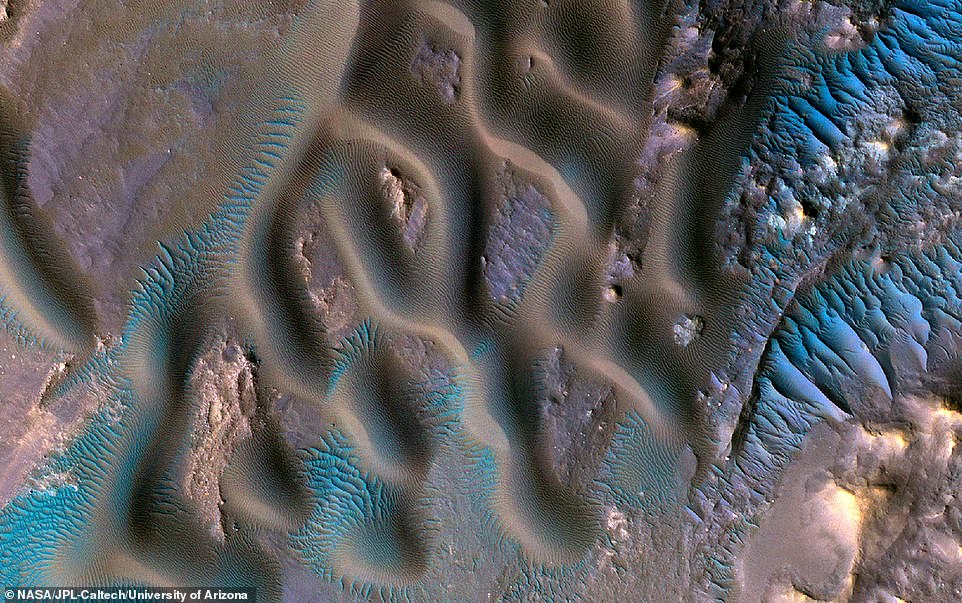 The sands of time: Ripples in sand on Mars appear in stunning teal and purple when color is enhanced. The image is an aerial view of the center of Gamboa Crater, which features giant sand dunes carved out by Martian winds

A trip back in time: JWST looked back 13.5 billion years to capture never-before-seen individual globular clusters around distant elliptical galaxies, knots of star formation within spiral galaxies and thousands of faint galaxies in the background 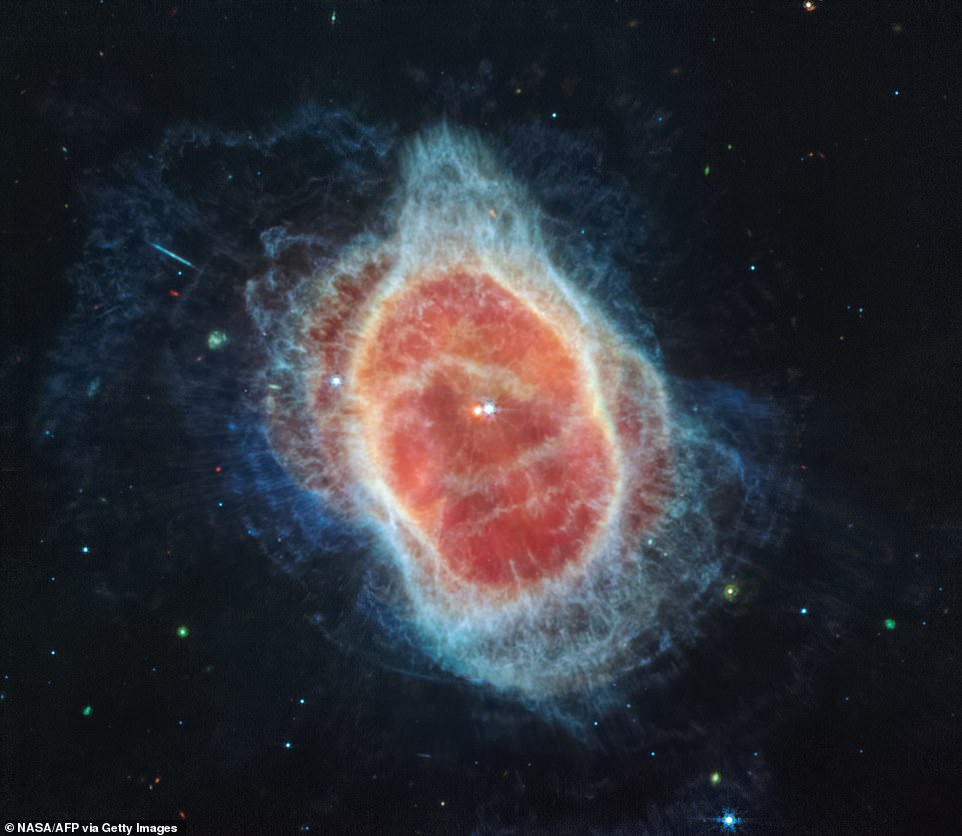 An everlasting ring: The Southern Ring nebula, also known as the ‘Eight-Burst’ nebula, is a planetary nebula – an expanding, glowing shell of ionized gas ejected from red giant stars late in their lives. NASA’s JWST captured this stunning image, revealing a cloak of dust around the second star (left in red) 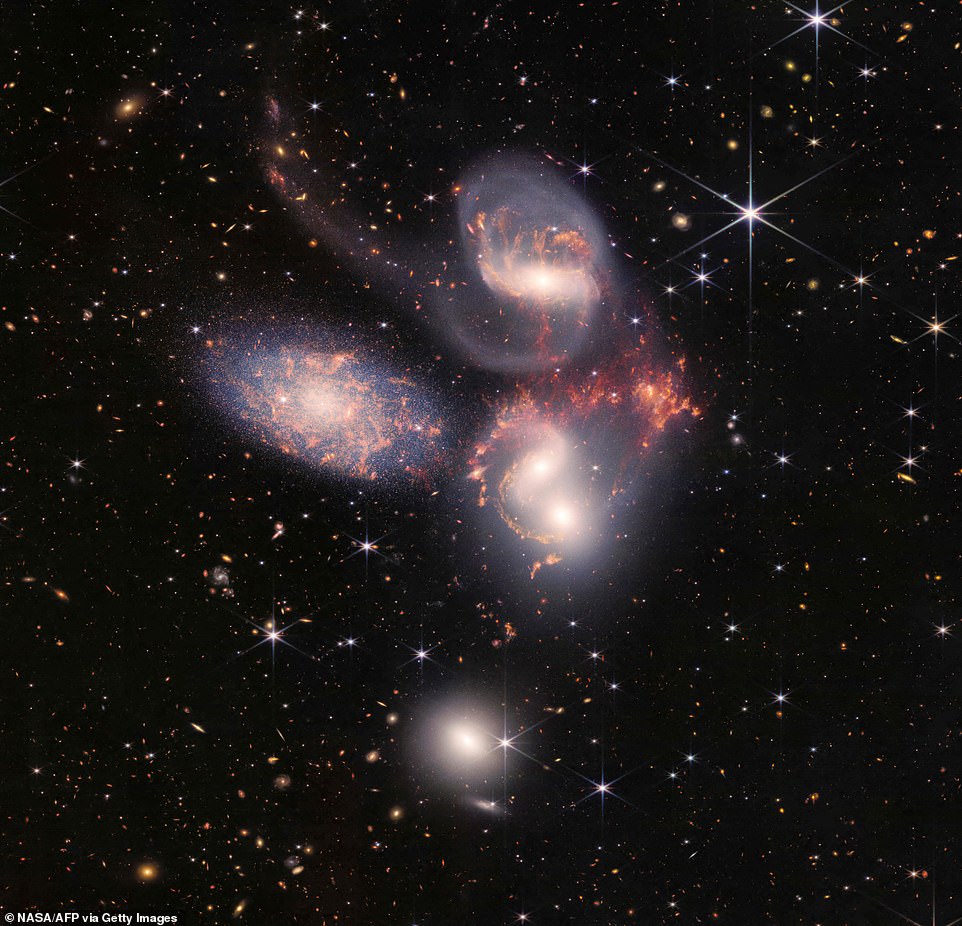 Clash of the titans: JWST captured a stunning image of the first compact galaxies ever seen by human eyes.  Stephan’s Quintet is a group of five galaxies in the constellation Pegasus. Four of the five galaxies within the quintet are locked in a ‘cosmic dance’ of repeated close encounters 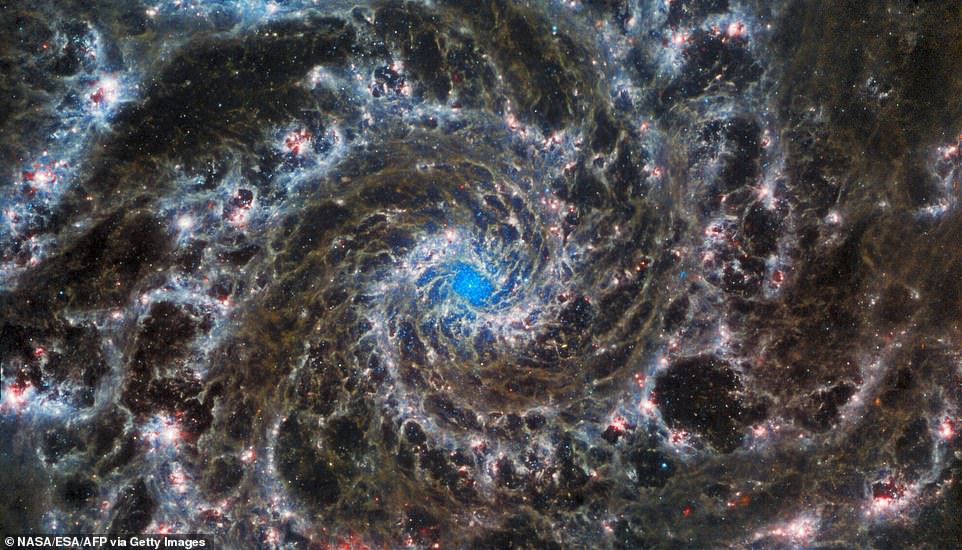 The heart of the galaxy: M74, a spiral galaxy 32 million light-years away and this image captures a detailed look of its center. JWST’s sharp vision revealed delicate filaments of gas and dust in the grandiose spiral arms that wind outwards from the center of this image

Reaching for the stars: This detailed image of the iconic Pillars of Creation, reveals its columns of cool interstellar gas and dust surrounded by countless twinkling stars. This is the first time the gas and dust can be seen clumping together and populations of forming stars, with some still encased in dust, are visible 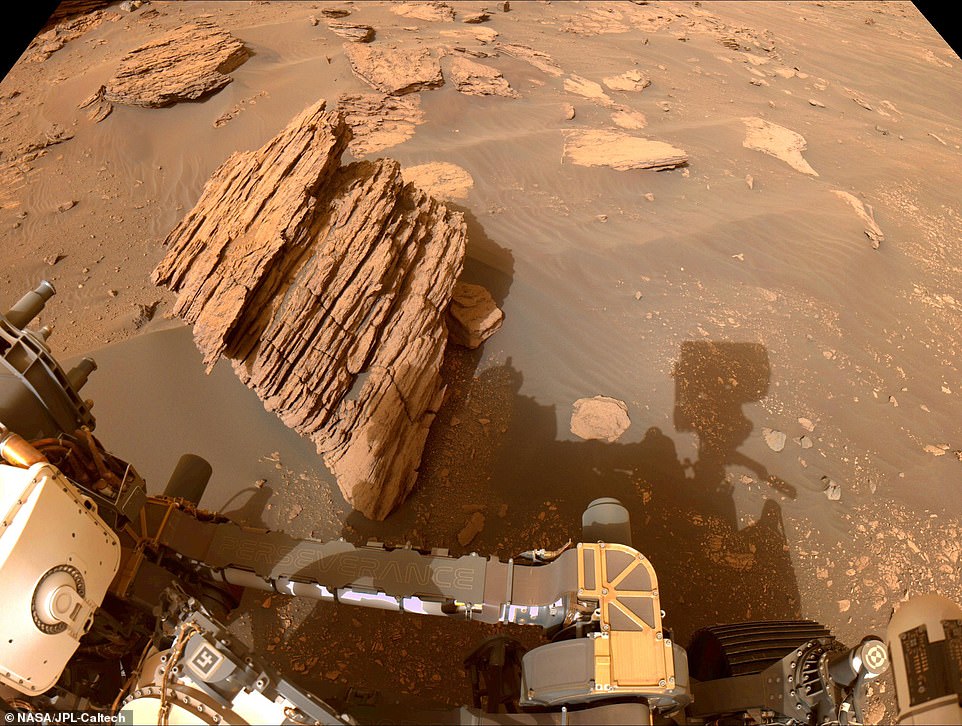 Rockin’ and rollin’ on Mars: NASA’s Perseverance rover shared the first image of ‘Bettys Rock’ on the Red Planet using one of its navigation cameras. The rock is named after Bettys Rock in Shenandoah National Park. A key objective for Perseverance’s mission on Mars is astrobiology, including the search for signs of ancient microbial life 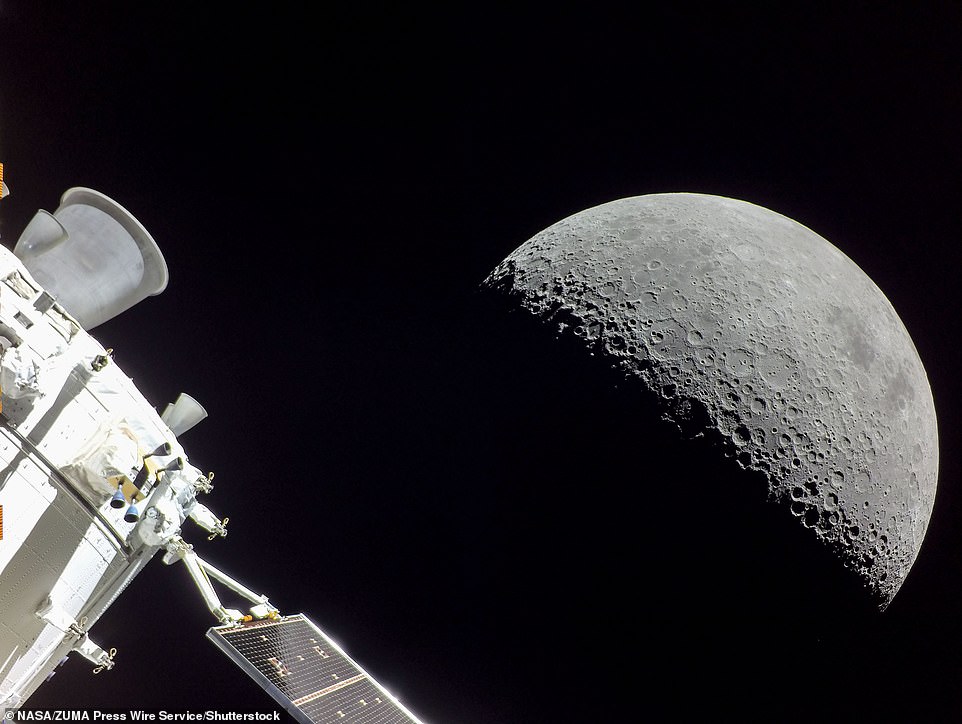 Fly me to the moon: NASA’s Orion made an epic journey to the moon and back. While on its 20th day of the 25-day mission, the capsule snapped an image of Earth’s natural satellite as it headed back home. Orion splashed down in the Pacific Ocean on December 11, completing the first phase of the Artemis mission that will put humans back on the moon 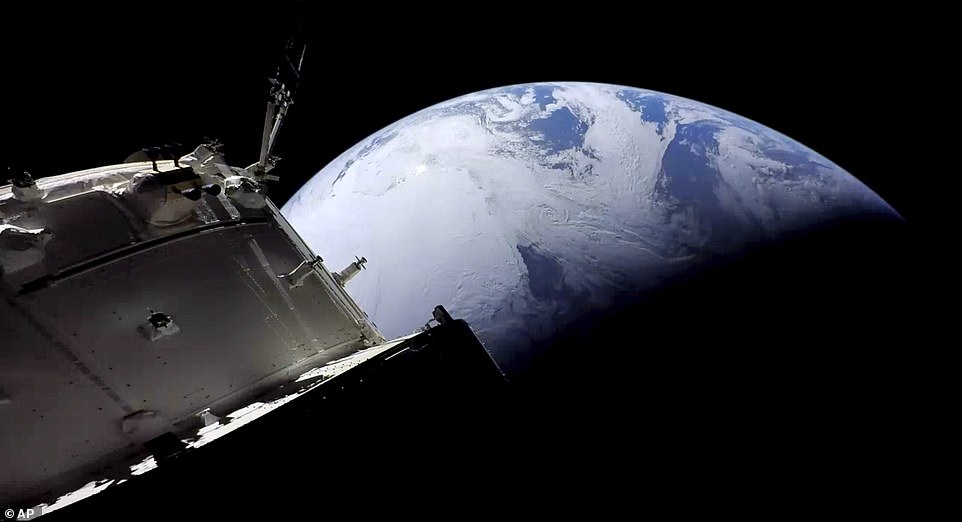 Honey, I’m home: Orion was approaching Earth on December 11 and snapped an image of our world before splashing down in the Pacific Ocean