Now considered a luxury, oysters were a staple diet item for indigenous peoples around the world for thousands of years, and consumed in huge quantities, a team from Smithsonian’s National Museum of Natural History discovered.

Researchers say the conversations about restoring ecosystems or conservation should include people whose ancestors maintained the ecosystems in the past.

The global study of indigenous oyster fisheries revealed they were hugely productive and sustainably managed on a massive scale, over years of intensive harvest, and done so in a way that did not appear to cause their populations to suffer and crash.

The team behind the research recommend studying these ancient, sustainable fisheries, as they can offers insights to help restore and manage estuaries today. 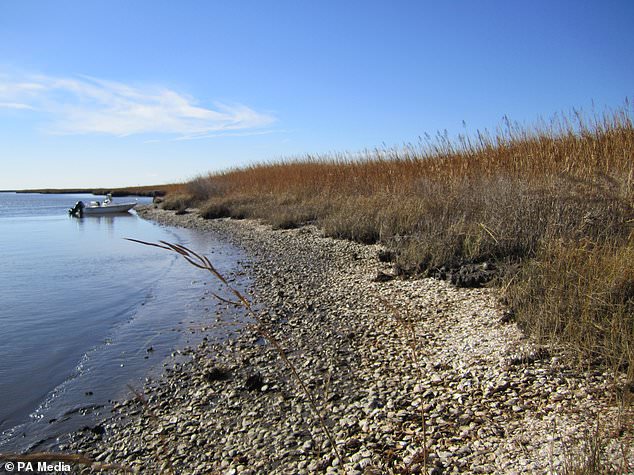 Dr Rick said: ‘Conservation today can’t just be seen as a biological question and can’t just be about undoing the environmental damage we’ve done in the modern era.

‘Instead, global conservation efforts should be coupled with undoing the legacies of colonialism which brought about the attempted erasure and displacement of indigenous people all over the world.’

In places like Chesapeake Bay and San Francisco Bay in America, and Botany Bay, near Sydney in Australia, oysters exist at tiny fractions of their former numbers. 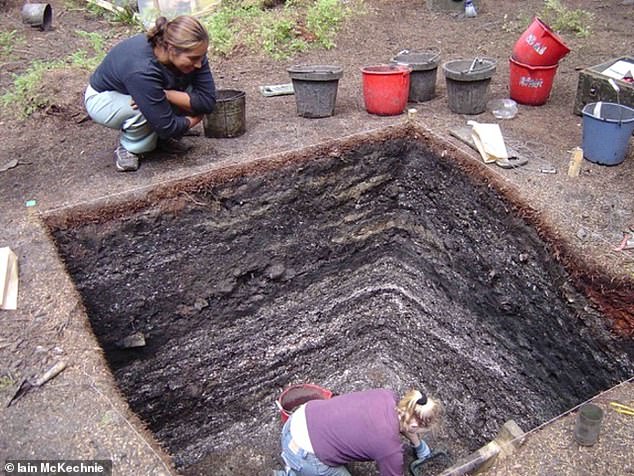 Dense shell midden deposit spanning the past 1,000 years as exposed during excavation at a Tseshaht First Nation village in the Pacific Northwest 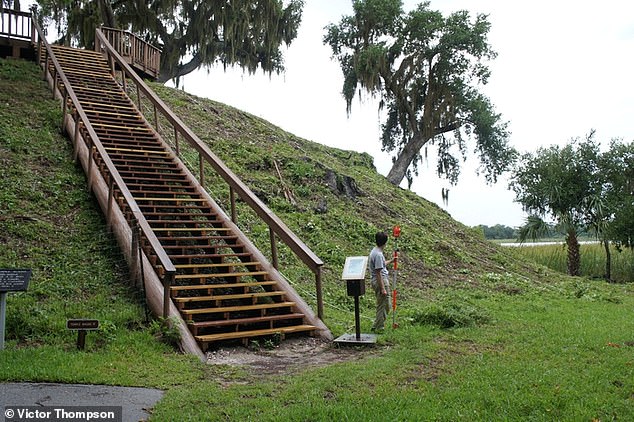 Crystal River site in Florida with massive shell mounds, dominated by oysters, pictured here during archaeological mapping and showing the modern staircase and platform built on top of one of the mounds

Their numbers declined because of European colonisers establishing commercial fisheries which quickly raked in huge quantities of oysters.

There were also changes to habitats, as well as disease, and other species being introduced to further push down the populations.

The study estimates that an island called Mound Key in Estero Bay contains the shells of some 18.6 billion oysters harvested by the region’s Calusa tribe.

About 200 miles north in Cedar Key, Florida, a site known simply as Shell Mound features the remains of an estimated 2.1 billion oysters.

On the Atlantic coast of the US, the midden at South Carolina’s Fig Island boasts just under 75.6 million oysters, and a number of sites in the Chesapeake Bay total around 84 million of the shellfish remains.

‘We knew there were big sites in the southern US, but when we started to calculate just how many oysters were in these sites we were astonished,’ the team explained.

Some of the oldest oyster middens are found in California and Massachusetts and date back more than 6,000 years.

The longest-utilized single sites (though not necessarily with perfect continuity) span some 5,000 years.

The new paper expands on a 2004 study which documented the collapses of 28 oyster fisheries located along the east and west coasts of North America and Australia’s east coast.

But the 2004 paper’s timeline in each location begins with European colonists’ creation of commercial oyster fisheries.

The new study aimed to look at the indigenous oyster fisheries in the same areas that appeared in the 2004 paper.

The team used the archaeological record – specifically accumulations of oyster shells that are also known as middens – to gather information for these sites.

They assessed which pieces of information were available for the greatest number of locations and realised that the weight of the oyster shells or the number of individual oysters at a site were the two data sets that were most consistent.

Study co-author Bonnie Newsom, an anthropologist at the University of Maine and citizen of the Penobscot Indian Nation, said oyster harvesting didn’t start 500 years ago with the arrival of Europeans.

‘Indigenous peoples had a relationship with and understood this species well enough to use it as part of their subsistence and cultural practices,’ she said.

‘Indigenous peoples have a lot to offer in terms of how to engage with this natural resource in ways that are sustainable.’

Some of the oldest oyster middens are found in California and Massachusetts and date back more than 6,000 years.

In many of these places, prior studies have suggested indigenous harvests remained sustainable despite their long tenure and significant numbers.

Dr Rick said: ‘What this study does is it says we need to start a broader dialogue when we look to restore an ecosystem or make conservation decisions.

‘In this case, that dialogue needs to include the indigenous peoples whose ancestors stewarded these ecosystems for millennia.

‘This broadening of perspectives can enhance biological conservation and help restore connections between Indigenous peoples and their ancestral homelands.’

The findings are published in Nature Communications.

Oysters: All you need to know

There are only two species of oyster in the British Isles, what is commonly known as the Rock Oyster and then our indigenous oyster called the Native. Rock oysters originally came from Japanese waters and are known as Pacifics, Rocks or their Latin name Crassotrea gigas. They grow really well and are farmed prolifically across the UK and Ireland.

The farming of oysters in different areas gives rise to a variety of different appellations, or ‘merroirs’ in a similar way that a chardonnay grape will produce a very different wine dependent on where it is grown, the same goes for oysters of the same species.

A Rock oyster from Porthilly Oyster Farm in the estuary of the Camel Valley in Cornwall will look and taste quite different from a Whitstable Rock out of Kentish waters.

The Native or Ostrea edulis, is a whole other kettle of fish. It is harvested from wild beds in a number of locations around the British Isles and is notoriously difficult to farm. Not as resilient as the Rock Oyster, the species is protected by regulation on fishing seasons and techniques. The Fal Native oyster beds in the waters around Falmouth in Cornwall, are only allowed to be worked using wind or manual power. The season is controlled and they have a minimum size of oyster for harvest.

This same species is the oyster that is known as the famous ‘Belon’ Oyster. The name is given from the river in which they are grown in Brittany, France. However, in the USA they still call their own Natives ‘Belon’ as there has been no efforts to protect the name with a PDO (Product of Designated Origin).

Because of the scarcity of these Native Oysters compared to their more prolific bedfellows, the Rocks, and the slightly more challenging metallics in the flavour profile, they are often regarded has the connoisseurs oyster. Personally, I believe that Rock Oysters can be just as fine and complex in flavour and some oyster farmers are working to develop sizes, shapes, meats and different flavour profiles within one farm. A great example being Carlingford Oysters who have the historically known Carlingford Rock but have been using special techniques to develop their premium Louet-Feisser Rock Oyster.