Neanderthals could SPEAK just like modern humans! CT scans of the extinct species’ ears indicate they had the capacity to perceive and produce human speech

Neanderthals had the ability to talk and understand speech in a similar way to modern people, researchers have discovered.

The ancient human ancestors are the closest thing we have to a cousin species and went extinct around 40,000 years ago.

However, before they were wiped out there was interbreeding between humans and Neanderthals with remnants of their DNA found in some populations to this day.

Now, for the first time, scientists know that these interspecies trysts were likely enabled by the ability to converse with one another. 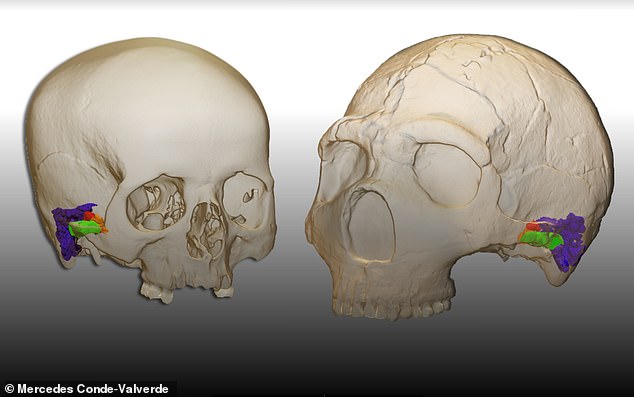 Pictured, a 3D model and virtual reconstruction of the ear in a modern human (left) and a Neandertal (right). Researchers found they could hear in the same range of sound as humans and therefore likely spoke in a very similar way

Researchers used high resolution CT scans to create 3D models of the ear structures of Neanderthals based on fossilised remains.

These were then compared to the auditory structure of humans and other, now extinct, hominin species.

Data from these models was fed into a software programme which was based on more than two decades worth of research.

It revealed Neanderthals were likely able to hear sounds with a frequency between four and five kHz, similar to that of modern humans.

POictured, a graph showing the range in which humans (blue), Neanderthals (grey) and Neanderthal ancestors (red) could hear. It shows that Neanderthals and humans overlapped and therefore likely heard and spoke in similar ways 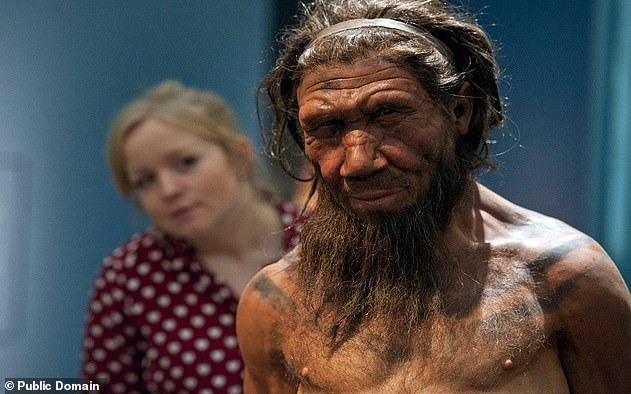 Before Neanderthal went extinct around 40,000 years ago there was interbreeding, with remnants of Neanderthal DNA found in humans to this day. Now, scientists know that these interspecies trysts were likely enabled by the ability to converse with one another

‘The results are solid and clearly show the Neanderthals had the capacity to perceive and produce human speech,’ says study author Professor Rolf Quam from Binghamton University in the US.

‘This is one of the very few current, ongoing research lines relying on fossil evidence to study the evolution of language, a notoriously tricky subject in anthropology.’

Professor Mercedes Conde-Valverde, lead author of the research from Alcala University in Spain, says: ‘The presence of similar hearing abilities, particularly the bandwidth, demonstrates that the Neanderthals possessed a communication system that was as complex and efficient as modern human speech.’

While revealing the range of sounds the Neanderthals had evolved to be able to hear, the research also helped shed light on what Neanderthal linguistics may have sounded like.

‘One of the other interesting results from the study was the suggestion that Neanderthal speech likely included an increased use of consonants,’ explains Professor Quam.

‘Most previous studies of Neanderthal speech capacities focused on their ability to produce the main vowels in English spoken language.

‘However, we feel this emphasis is misplaced, since the use of consonants is a way to include more information in the vocal signal and it also separates human speech and language from the communication patterns in nearly all other primates.

‘The fact that our study picked up on this is a really interesting aspect of the research and is a novel suggestion regarding the linguistic capacities in our fossil ancestors.’

The full findings are published in Nature Ecology & Evolution.

They were later joined by humans, who entered Eurasia around 48,000 years ago.