In 2018, scientists set out on an expedition to survey the habitat of an endangered bat species in the West African country of Guinea. One night, a trap turned up something unusual: a new species of bat with a fiery orange body strikingly juxtaposed with black wings.

“It was kind of a life goal in a way, one that I never thought would happen,” said Jon Flanders, director of endangered species interventions at Bat Conservation International, a nonprofit organization based in Austin, Tex. “Every species is important, but you get drawn to the interesting-looking ones, and this one really is spectacular.”

There are more than 1,400 species of bats, and every year more than 20 join the list. Mostly, though, these are lab-based discoveries that involve genetically parsing out cryptic species, or ones that look exactly (or almost exactly) like each other and were formerly thought to be the same.

Just happening upon a new bat species in nature is something entirely different.

“This sort of situation where experienced researchers went out in the field and caught an animal and held it in their hand and went, ‘This is something we can’t identify,’ that’s much more unusual,” said Nancy Simmons, curator of mammals at the American Museum of Natural History in New York and chairwoman of the global bat taxonomy group at the International Union for Conservation of Nature.

He and his colleagues set out to survey long-abandoned mining tunnels that have become a favorite home to the region’s endangered bats. When they found a fuzzy, pumpkin-orange animal mixed in with the usual brown ones in their trap, they thought it must just be an oddly colored individual.

“When I saw it for the first time, I thought it was a common species,” said Eric Bakwo Fils, a conservation biologist and bat expert at the University of Maroua in Cameroon. 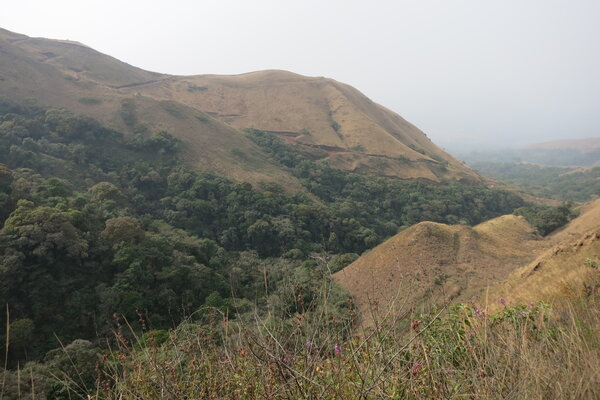 Looking through their identification guides, however, Dr. Bakwo Fils and Dr. Flanders could not confirm a match with any other African species. When the team got back to camp, unbeknown to each other, Dr. Flanders and Dr. Bakwo Fils both spent much of the night searching text books and online resources to try to solve the mystery. They were both unsuccessful.

“The following morning, I met up with Eric and almost at the same time, we said, ‘This is a new species,’” Dr. Flanders said.

They reached out to Dr. Simmons, who agreed within 15 minutes of seeing the photos that it looked like they had found something new.

The team managed to re-catch the original animal, a male, and also captured a female. Dr. Simmons combed through the extensive bat collections at the American Museum of Natural History to compare the two specimens with known species, and she traveled to the Smithsonian National Museum in Washington, D.C., and the British Museum in London to do the same.

The researchers also conducted a genetic analysis, which revealed that M. nimbaensis is at least five percent different from its closest related relatives. They described their findings Wednesday in the journal American Museum Novitates.

Now that the new species confirmation is official, the next step is to learn about M. nimbaensis’ ecology. “The more we know about it, the more we’ll know how to protect it as well,” Dr. Flanders said.

The researchers plan to use M. nimbaensis’ echolocation calls that they recorded in the field to help identify the species in acoustic monitoring that they are already carrying out in the area. From there, they can narrow down the bat’s habitat preferences, which hopefully will lead to protections.

“As far as we know, it’s limited to the top of this mountain range in Guinea,” Dr. Simmons said. “It’s probably endangered just by virtue of living in this small part of the planet.”

Bats play critical ecological roles in West Africa, dispersing seeds, pollinating plants and keeping insect species in check. Yet they are persecuted throughout the region because of superstitions, and these ideas have been compounded by the animals’ association with Ebola and other diseases, Dr. Bakwo Fils said. Like many other species, they are also threatened by habitat loss.

Dr. Bakwo Fils hopes that the excitement generated by the new species can start to motivate protections for the region’s bats.

“This discovery is very important in terms of West Africa’s bat biodiversity, because even if bats are a very important component of our ecosystems, they rarely receive attention,” he said.