NASA is finally going back to Venus, for the first time in more than three decades. And a second time too.

On Wednesday, Bill Nelson, the NASA administrator, announced the agency’s latest choices for robotic planetary missions, both expected to head to Venus in the late 2020s: DAVINCI+ and VERITAS.

“These two sister missions both aim to understand how Venus became an inferno-like world capable of melting lead at the surface,” Mr. Nelson said during his “State of NASA” address to the space agency’s work force.

In today's #StateOfNASA address, we announced two new @NASASolarSystem missions to study the planet Venus, which we haven't visited in over 30 years! DAVINCI+ will analyze Venus’ atmosphere, and VERITAS will map Venus’ surface. pic.twitter.com/yC5Etbpgb8

Venus is in many ways a twin of Earth — it is comparable in size, mass and composition, and it is the planet whose orbit is the closest to Earth’s. But the history of the two planets diverged. While Earth is moderate in temperature and largely covered with water, Venus, with a dense atmosphere of carbon dioxide, is a hellishly hot 900 degrees Fahrenheit at the surface. After numerous missions by the United States and the Soviet Union to explore it in the 1970s, ’80s and ’90s, attention shifted elsewhere.

In the past year, a neglected Venus re-entered the planetary limelight after a team of scientists using Earth-based telescopes claimed they had discovered compelling evidence for microbes living in the clouds of Venus today where temperatures remain comfortably warm instead of scorching.

They said they had detected a molecule, phosphine, for which they could come up with no plausible explanation for how it might have formed there except as the waste product of living organisms.

But other scientists looking at the same data said they did not observe a convincing signal. Still, the finding prompted Jim Bridenstine, then NASA’s administrator, to say in September, “It’s time to prioritize Venus.”

Last year, NASA had winnowed proposals for its Discovery program, in which scientists come up with ideas for smaller planetary missions with modest price tags, down to four finalists.

Two of them, DAVINCI+ and VERITAS, proposed explorations of Venus.

The other finalists were Io Volcanic Observer, which would have explored Io, a moon of Jupiter that is the most volcanically active body in the solar system, and Trident, which would have sent a spacecraft flying past Triton, an intriguing large moon of Neptune.

Scientists working on the two missions received the good news earlier in the day. For Suzanne Smrekar, a geophysicist at NASA’s Jet Propulsion Laboratory in California who is the principal investigator for VERITAS, the phone call came at 5:30 a.m.

But she had been warned the night before to expect a call from NASA headquarters. “So I was standing by,” she said. “Since about three in the morning.”

DAVINCI+ could conclusively confirm the presence of phosphine. Tentatively scheduled for launch in 2029, the spacecraft would make scientific observations during two flybys in 2030.

As it approached Venus for a third time in 2031, the spacecraft is to drop a spherical probe chock-full of instruments that would sniff and analyze gases as it descended through the atmosphere for just over an hour.

“The measurements we make as we descend to the clouds will be very fine-scale, equivalent to those we’re used to seeing of Mars and Earth,” said James B. Garvin of the NASA Goddard Spaceflight Center in Maryland who is the principal investigator for DAVINCI+.

DAVINCI is a shortening of Deep Atmosphere of Venus Investigations of Noble Gases, Chemistry and Imaging. The plus sign indicates enhancements over a previous proposal, DAVINCI. 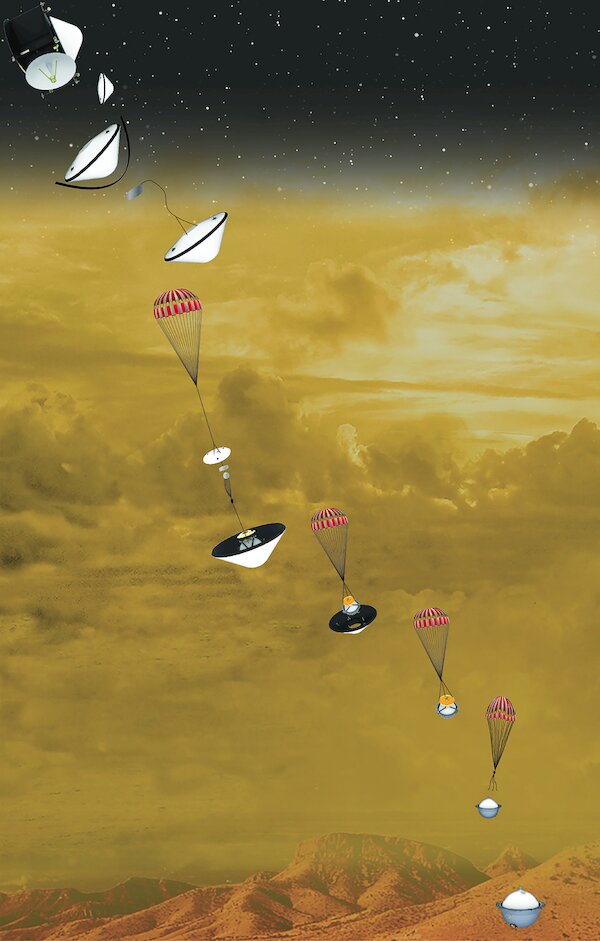 Concentrations of krypton, argon, neon and xenon — the noble gases that do not react with other elements — may provide hints about how Venus and its atmosphere formed. The measurements might also find signs of whether water has escaped from Venus into space and whether oceans ever covered the surface.

And the same instruments could also directly identify phosphine molecules, and that would then lead to a spirited debate about whether the phosphine was definitive proof of life or whether some geological or chemical reactions not involving biology could have generated it.

Dr. Garvin said the information will also provide clues beyond the solar system as well — clues that astronomers using the James Webb Space Telescope to identify Venus-like planets around other stars.

VERITAS, short for Venus Emissivity, Radio Science, InSAR, Topography & Spectroscopy, is to launch about a year before DAVINCI+. It is, in effect, a much improved version of NASA’s last spacecraft dedicated to exploring Venus, Magellan, which arrived in 1990 and spent four years mapping the planet’s surface with radar.

The new mission will be able to provide topographic measurements that are more than 100 times better than what Magellan produced, stitched together into a highly detailed three-dimensional map.

“If the San Andreas fault was present on Venus, you would have no idea from Magellan data,” Dr. Smrekar said. “We only have just like a very crude topographic map.”

The floors of craters on Venus are dark, but no one knows if that is because they are lava flows from recent eruptions or accumulated sand dunes. “That’s a super important question for understanding the history of volcanism,” Dr. Smrekar said. .

Another instrument, a spectrometer, will be able to peer through the cloud deck and study what the rocks on the surface of Venus are made of. “We have no information whatsoever about the global composition,” she said.

That will test a hypothesis that some parts of Venus’s crust are similar to Earth’s continents while most of the rest are like the basalt that form Earth’s seafloors.

“We’ll also use that spectrometer to look for active volcanism, for recent volcanism,” Dr. Smrekar said. “And for evidence of water coming out of volcanoes. There’s been this idea that maybe Venus is dry in the interior.”

Studying Venus will also shed light on the other rocky planets in the solar system including Earth. “We hope these missions will further our understanding of how Earth evolved and why it’s currently habitable when others in our solar system are not,” Mr. Nelson said.

Data from one will help scientists interpret observations from the other, scientists said.

“I’ve often said Mars is cool, and Venus is way hotter,” Dr. Garvin said. “I think we’ll be able to actually show that by the time these missions are finished.”

Since NASA’s last trip to Venus, it has successfully sent a parade of spacecraft to Mars — five rovers, four orbiters and two landers — striving to understand the history of water and the possibility of life on the red planet. But the agency has sent none to Venus.

Even before the phosphine announcement, many planetary scientists were pushing for a return visit.

In 2017, VERITAS and DAVINCI were among the finalists in the last round of NASA’s Discovery program, but the space agency chose two asteroid missions instead.

Also in 2017, for the larger, more expensive New Frontiers competition, NASA considered a Venus mission called Venus In situ Composition Investigations, or Vici, which sought to put two landers on the planet’s surface. It was passed over for Dragonfly, which will send a plutonium-powered drone to fly on Titan, the largest moon of Saturn.

In addition, planetary scientists are in the middle of putting together their once-a-decade recommendations to NASA about their priorities. NASA usually undertakes only one flagship mission — a big, ambitious, expensive effort — at a time. A Venus flagship mission under consideration would include two balloons that would float in the atmosphere for a month.

And at least one private company, Rocket Lab, wants to send a small probe to study Venus in the coming years. India and Russia have also suggested Venus missions in the future.

Other space agencies have visited Venus more recently. The European Space Agency launched Venus Express in 2005, and it orbited the planet for eight years, observing young lava flows and other evidence that it might still be geologically active.

Akatsuki, from the Japanese space agency, is the only spacecraft currently at Venus. In its study from orbit, the spacecraft has revealed disturbances in the planet’s winds known as gravity waves, as well as equatorial jet streams in its atmosphere.

While the selection of the Venus missions may be encouraging to some planetary scientists, others are sure to be disappointed that the Trident mission to the Neptune system was overlooked. The planet and its moons have not been visited since 1989 when Voyager 2 passed by, leaving much about the solar system’s outermost planet unexplored.

“The compelling nature of exploring Triton comes from the recognition that our solar system is full of ocean worlds,” said Candace Hansen-Koharcheck, a senior scientist at the Planetary Science Institute and a co-investigator on Trident. She called the mission, “an investment in the future,” that would help to understand such worlds.

To get to Neptune in a reasonable amount of time, Trident would have zipped past Jupiter and used that giant planet’s gravity to boost its velocity. Jupiter and Earth won’t line up again in way to provide a gravitational slingshot for a mission of this kind to Neptune for another 13 years.

One goal of the Trident mission was to study plumes that could be emitted from a subsurface ocean on Triton, Neptune’s large moon. If hypotheses for how those plumes form are correct, by the time another mission reached Triton, the moon’s activity will have ceased because of its position in orbit relative to the sun. There may not be another opportunity to observe the outbursts for 100 years.

Alfred McEwen, the principal investigator for the Io proposal, was disappointed, especially as its exploration of Io would have overlapped with two other planned spacecraft for the Jupiter system: The Jupiter Icy Moons Explorer from the European Space Agency, and NASA’s Europa Clipper mission.

The data from the three spacecraft would have helped put together a clearer picture of how Jupiter and its moon interact.

But he said that it “makes sense to have the two Venus missions together, because they’re complementary.”

NASA’s Juno spacecraft, which has been studying Jupiter since 2016, will also conduct flybys of Io in the years ahead.